English
High Quality Products Can Be Purchased.
You are here: Home » News » Why Pilot Brewing Systems Are Critical For Future Success

Why Pilot Brewing Systems Are Critical For Future Success

In craft beer, you have to push the limits to continue to engage customers. One way to do this is through new beers. But not every new beer is a winner; so breweries use smaller brewing system to test out new recipes. These pilot brewing systems are one of the ways they are able to drive new products into the market and continue to create buzz about their brewery.

While “flagship” beers pay the bills, the special/limited release beers often get more attention. So investing in producing small batches of unique beers is a great way to create hype, gain recognition, and sell more beer.

What Is A Pilot Brewing System

Every brewery has a brewing system (aka brewhouse). It’s what makes it a brewery in the first place. A brewing system can vary in size, features, etc based on the needs, goals, size, and financial resources of a brewery.

This main system is where the vast majority of their beer will be produced.

These smaller systems often lack some of the features of the the main system. Brewing on these pilot brewing systems is more labor intensive.

The goal of a pilot brewing system is to make smaller batches of beer that are used to supplement their flagship beers, experiment with new recipes, and create limited/special release beers.

Brewing a small or large batch of beer takes about the same amount of time and effort. So from the outside, it seems ineffective to have a pilot system. 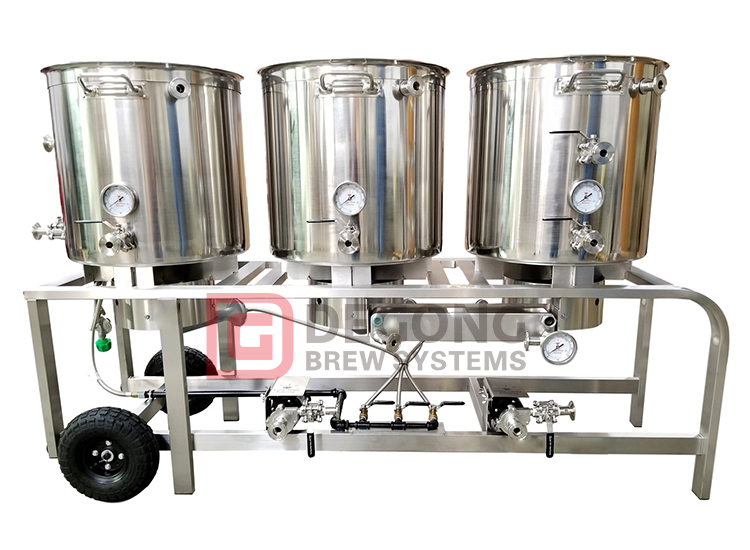 Why not brew everything in larger quantities on the main system?

Pilot Brewing SystemsIn many cases, an experimental beer is being made on the pilot brewing system. If the beer doesn’t go well, they’d rather dispose of a smaller amount of beer. This minimizes the financial risk.

And even if the beer does turn out as expected, it doesn’t mean there is a demand for that specific style or flavor. So producing small amounts of beer is often ideal to limit quantity.

The larger brewing system does not allow for this kind of volume or risk control.

And this thought process holds true for all breweries. Pilot systems are valuable to every brewery, regardless of their size.

For example, as a brewery grows, they often need more brewing capacity than their system can handle. A brewery in this situation can’t waste time brewing experimental beers on their main system. All of their brewing capacity must be focused on making their flagship beers.

On the opposite side of the spectrum, a brewery with a brand new system (either at the time of opening or after an expantion), may find their additional brewing capacity is just too much to risk on a test batch of a new recipe.

So in both situations, these breweries have a need to test out new recipes without interrupting their normal brewing schedule. And they both want options to limit their risk if the new beer doesn’t meet their flavor or quality standards.

So what does all of this mean to you and me; the craft beer drinkers?

For many, this is just industry details that are kinda boring. But for many, understanding the philosophies and processes of brewing helps us better understand our favorite drink.

The brewing process is just as much art as it is science. The pilot brewing systems are the blank canvas that brewers get to use to develop and create. While the main systems are reserved for utilizing science to make consistently great beer.

Both are needed and both have value.