English
High Quality Products Can Be Purchased.
You are here: Home » News » How Brewers Carbonate Beer

How is beer carbonated?

That’s actually a question that has far more answers than you’d think, and to some beer fans, is serious enough to dictate whether they will drink a beer or not.

In the simplest terms, a beer is carbonated by adding carbon dioxide to the beer, to a desired level depending on the format and the style. Most ales have around 4.8g/L (or 2.7 grams per pint) of carbon dioxide in them.

A lager or a wheat beer will generally have more than that, and a cask beer will generally have less than that. The most common way to carbonate a beer is to simply force the carbon dioxide into the beer under pressure. The method in which this achieves varies from brewery to brewery, but is mostly done when the beer is finished fermenting and cold, (around 0 degrees celsius), and is generally the final step before the beer is stored before packaging.

Due to something called Henry’s Law, liquid holds more gas the colder it is. This is why when you open a warm can of coke it fizzes more than an ice cold one from the fridge, since the coke itself is unable to contain as much gas due to being warm. Brewers know and use this law, which dictates that higher pressure and lower temperature lends itself to more efficient gas absorption by liquid.

Brewers also often employ a ‘carbonation stone’ (see above), which is a small ceramic cylinder that the gas is bubbled through into the beer. The tiny pores reduce the bubble size, meaning the gas has a more efficient contact with the beer. Anyone who owns a home aquarium will be familiar with this concept. 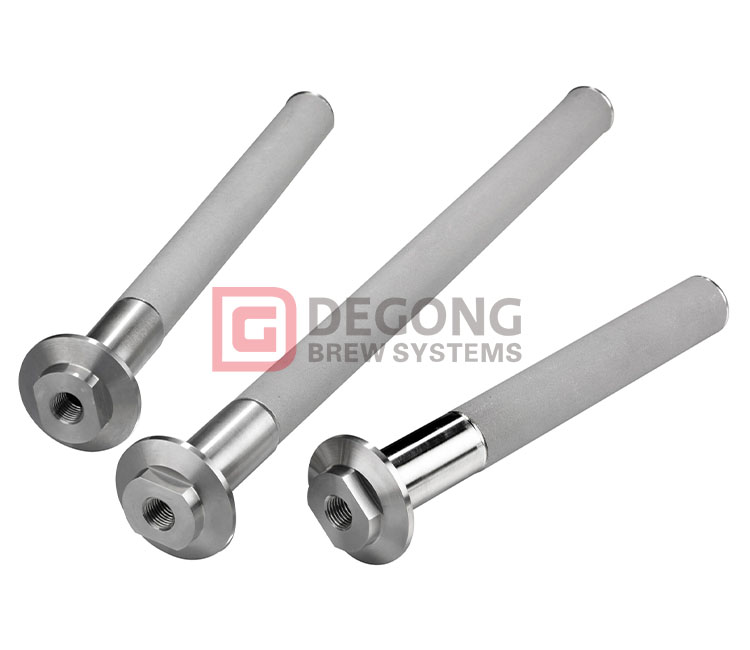 Another method is simply to apply a great amount of pressure on to the ‘top’ of the liquid, so the beer absorbs the co2 through ‘top pressure’, although this can take a few days, compared to a few hours with a carbonation stone.

Larger breweries, as they tend to do, often employ a faster and more expensive method. They use machines that instantly carbonate the beer to their exact specification as it flows at high speed through pipes on the way to being packaged; the beer enters the machine flat, and comes out carbonated.

Anecdotally this lends itself to a carbonation that feels rougher in the mouth, however I’m not sure there’s any evidence to support this.

The above methods however can upset some purists. Anyone who likes beer has probably come across CAMRA in some form or another. They are a group that formed in response to a decline of people drinking cask beer in the 1960s and 1970s.

One of their core tenets is based around carbonation; in fact they only accept beer as ‘real ale’ if the beer is ‘alive’. What this means in carbonation terms, is that the beer is added to a cask or bottle flat, and then has sugar added to it. The beer is then sealed in the package, allowed to warm up, and then the yeast still present in the beer eats the sugar, and converts it to co2.

Because this occurs under pressure in the cask/can/keg/bottle, the co2 can’t escape, and therefore the beer becomes carbonated. The beer is considered ‘alive’ due to the presence of living yeast, and considered ‘real ale’ due to this exact method of carbonation. Some breweries,opt to add fermenting beer instead of sugar, which has a similar desired effect without needing to add processed sugar.

Another method, and this is probably the rarest, is to intentionally stun the fermentation by chilling the beer before the yeast is done eating all the sugar. The beer can be packaged, allowed to warm up, and then the yeast reactivate and continue to consume the sugar.

If this is done at just the right time during fermentation, then the yeast will finish the job they were so rudely interrupted doing by the brewer, and the beer will perfectly carbonate in the package.

So next time you slurp a cold beer and feel a tingle on your tongue (or burp loudly and proudly in celebration), you can now boast some knowledge about the carbon dioxide you're interracting with.