English
High Quality Products Can Be Purchased.
You are here: Home » News » Why Rice or Corn is Used in Brewing Beer

Why Rice or Corn is Used in Brewing Beer

Traditionally, barley was the main grain used in brewing beer. And for the most part, it still is. However, many brewers use other grains along with barley to create their beer. Most of the beer sold in the world is made with rice or corn included in the grain variety.

Beer purists accuse the big beer brewers of adding rice or corn to the beer as a way to make cheaper beer as rice and corn often cost less than barley. There is no proof that adding in these other grains is done merely as a cost-savings technique. Major brewers do not make a secret of the grains these use to make the beer—anyone touring their breweries is told openly about the ingredients that are used. In fact, Budweiser bottle labels clearly tout the quality of rice used to make the beer.

It's All About the Color

The alternate grains, like rice and corn, certainly make the beer lighter than barley does, and that seems to be the goal of most makers of pale lager. Lighter colored beer is quite popular and many beer brewers adhere to "the lighter the better" adage.

A term widely used in the brewing industry, adjunct grains refer to any ingredient, besides barley, that is used to make beer, by adding sugar to the fermentation process. Adjunct grains include corn and rice, along with well known and more accepted beer-making grains like rye, wheat, and oats. The rise in craft brewers has led to more small-batch beers produced with adjunct grains and other ingredients. With more options to choose from, a beer drinker may be more aware of the beer's ingredients and the impact on the flavor profile of the beer.

Corn adds a slightly sweet smoothness to the beer and is often included in light lagers and cream-style ales. It can also be used to lighten a fuller, denser English style beer. It is hard to taste an actual corn flavor in most beers, however, its impact results in smoother, light beers. Rice is even less flavorful than corn and produces a dry, clean taste.

While corn is often given a bad reputation, there are many ways to utilize corn in home brewing beer. Corn can be incorporated into beer recipes in a wide variety of forms including cornmeal, corn grits, malted corn, corn sugar, and even popped corn. If you plan on using corn or corn products in your home beer making, you'll need to carefully follow a recipe. Too much corn will impact the fermentation process and change the taste, color, and clearness of the beer. While corn can be used to reduce costs, it also brings a unique flavor profile to the beer and should be considered as an ingredient for any home brewer to experiment with. 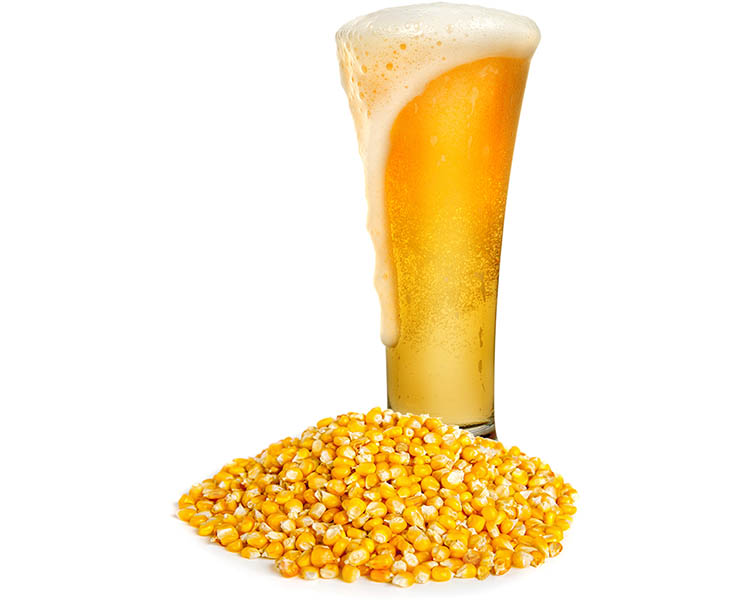