English
High Quality Products Can Be Purchased.
You are here: Home » News » What Is Distillation? Chemistry Definition

What Is Distillation? Chemistry Definition

Distillation is the process of separating the components of a mixture based on different boiling points.

Examples of distillation uses include purification of alcohol, desalination, crude oil refining, and production of liquefied gas from air.

Humans have used distillation techniques in the Indus Valley since at least 3000 BC.

Distillation is a widely used method for separating mixtures based on differences in the conditions required to alter the phases of their constituents. To separate a mixture of liquids, the liquids can be heated to force components, which have different boiling points, into the gas phase. The gas is then condensed back into liquid form and collected. The above process is repeated for the collected liquid to improve the purity of the product, which is called secondary distillation. Although the term is most commonly used for liquids, the reverse process can be used to separate gases by liquefying components using temperature and/or pressure changes.

Distillation is used in many commercial processes, such as the production of gasoline, distilled water, xylene, alcohol, paraffin, kerosene, and many other liquids. Gases can be liquefied and separated. For example: nitrogen, oxygen and argon are distilled from air. 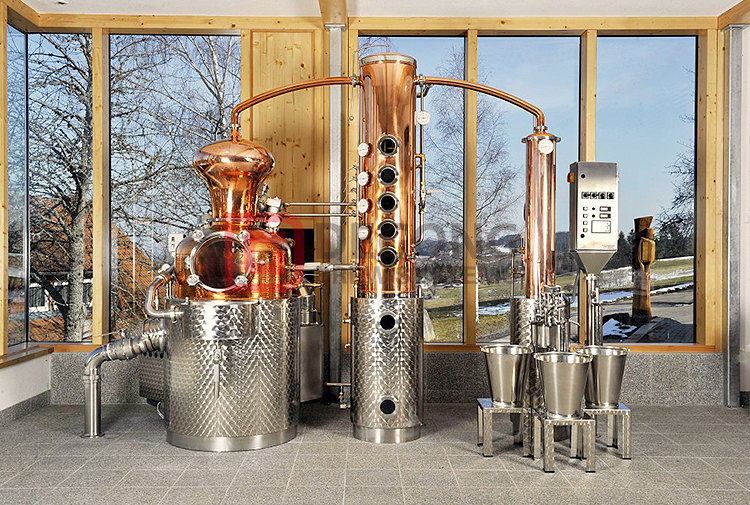 Simple distillation can be used when the boiling points of the two liquids differ significantly from each other or when the liquids are separated from solid or non-volatile components. In simple distillation, the mixture is heated to change the most volatile components from liquid to vapor. The vapor rises and enters the condenser. Typically, the condenser is cooled (eg, by flowing cold water around it) to facilitate condensation of the collected vapors.

Steam distillation is used to separate heat sensitive components. Steam was added to the mixture to allow it to partially evaporate. This vapor is cooled and condensed into two liquid parts. Sometimes fractions are collected separately, or they may have different density values, so they separate themselves. An example is the steam distillation of flowers to produce essential oils and water-based distillates.

Fractional distillation is used when the boiling points of the components of the mixture are close to each other, as determined using Raoult's Law. Fractionation columns are used to separate components, using a series of distillations called rectification. In fractional distillation, the mixture is heated, causing the vapors to rise and enter the fractionation column. As the vapor cools, it condenses on the column packing. The heat of the rising vapor re-evaporates the liquid, moving it along the column, ultimately yielding a higher-purity sample of the more volatile components of the mixture.