English
High Quality Products Can Be Purchased.
You are here: Home » News » The stage changes in beer fermentation process

When we put yeast into the wort, it goes into what we call a lag phase. Although there are no obvious signs of fermentation at this stage, something is still happening. Yeast absorbs oxygen in wort and produces sterols, which are essential for yeast reproduction and healthy growth.

Depending on the beer style, noticeable fermentation (a layer of foam) can be seen between 24-48 hours after dosing. At this point, the yeast is moving from the lag phase into the anaerobic phase. The yeast cells rapidly increase in number during the active phase and begin to consume the sugars in the wort. As the number of yeast cells increases, ethanol and flavor compounds are produced. Once fermentation has dropped a few points (2 Plato or 0.07 SG), you can start brewing most styles of beer.

If the beer is not being spun (for example, you plan to dry the hops), then you will see a lot of gas being produced and escaping from the fermentation vessel (FV). This is carbon dioxide formed by yeast cells breaking down sugar. Additionally, a thick layer of foam, called Clausen, forms on the top layer of the wort.

The active phase of fermentation typically lasts from 4 to 8 days, depending on: beer style, yeast used, pitch and fermentation temperature. 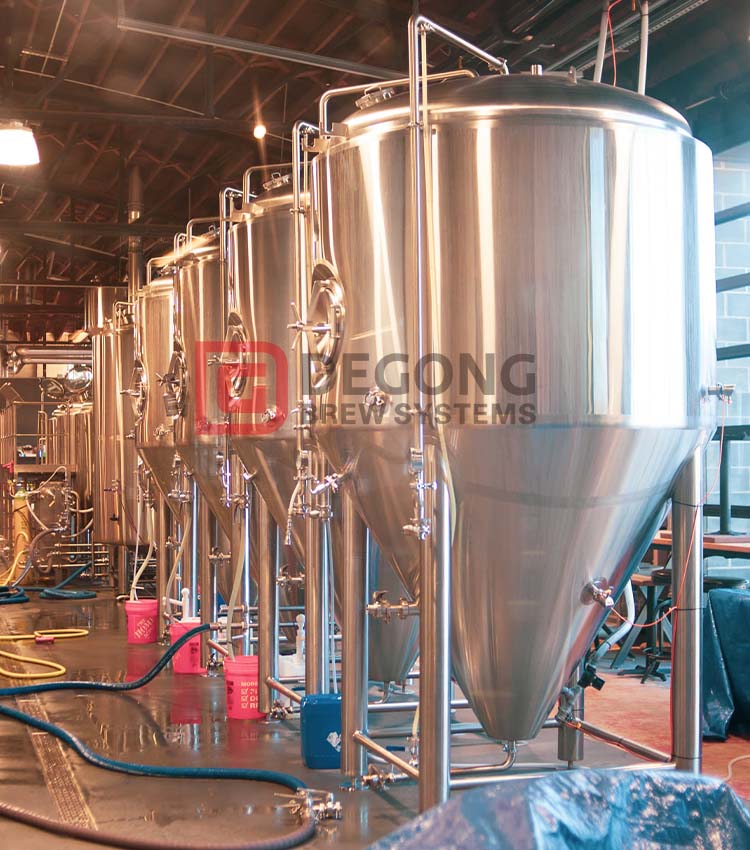 Yeast growth slows down as beer fermentation enters a stationary phase, however most flavor and aroma compounds are also produced during this phase. During this stage the yeast reabsorbs the diacetyl from the fermentation process, hydrogen sulfide also escapes as a gas from the fermenter, the Clausen falls, and the yeast begins to settle or flocculate. At this stage you hardly see any change and you have to measure the specific gravity of the wort to detect the degree of attenuation. Once the gravity reading stabilizes at the same level for a few days, you know the fermentation is done.

During the conditioning phase, the lager can be transferred to a bright tank, being mindful of the entry of oxygen. When the temperature of the beer drops to 0~3℃, the yeast will continue to flocculate and settle. Beer typically "ripes" slowly due to the reduction of various undesirable flavor compounds in the beer. In ale, the desired flavor and aroma may decrease over time. For example, in IPAs where good hop aroma is desired, aging reduces the hop taste. Additionally, any oxygen that gets in at this stage can damage the overall quality of the beer and shorten shelf life. What will be seen during the conditioning phase: most of the yeast is shed from the beer (which can be poured), making the beer clearer. The beer becomes "smoother" as the pungent taste softens or diminishes.

The fermentation stage of beer is a topic worthy of further discussion. After truly understanding the process, it will help us to brew better beer. Therefore, we should continue to learn and deepen the technical process.