English
High Quality Products Can Be Purchased.
You are here: Home » News » The production process of vodka.

The production process of vodka.

Vodka is one of the most basic neutral spirits and a key ingredient in many classic cocktails. Although vodka is produced worldwide, the spirit is still closely associated with distilleries in countries such as Russia, Poland, Sweden and Finland in the "Vodka Belt".

Vodka is a distilled liquor that is traditionally colorless and flavorless, either enjoyed neat (entirely on its own) or as the base spirit of many cocktails, including the Vodka Martini, the Bloody Mary, and the Cosmopolitan. While vodka’s origins are uncertain, some historians believe that the distilled spirit originated for medicinal purposes in Eastern Europe—either Russian or Polish—in the fifteenth century.

Traditional vodka is made from two raw materials: water and ethanol from the fermentation of cereal grains (like wheat, sorghum, or rye). Many vodka brands use other base ingredients (like potatoes and sugar beets) and additives (like botanicals and spices) to achieve distinctive character in their liquor. After fermenting and distilling, vodka undergoes a filtration and refining process to remove impurities and achieve a smooth mouthfeel.

What Is Vodka Made From?

A bottle of vodka is one of the simplest liquors, made from just a few ingredients:

1. Fermentable base: Most alcohol-making begins with an agricultural product that will undergo a fermentation process. Potato vodka is often considered the most traditional recipe for the liquor, but the most common raw materials for vodka are a mixture of cereal grains—for instance, wheat, sorghum, or rye. After undergoing the fermentation process, this base produces ethanol, which vodka makers sieve out of the solid mixture, leaving them with pure, liquid alcohol.

2. Water: After the distillation process, vodka makers add water to the product to achieve the desired alcohol by volume. For an alcoholic beverage to be classified as vodka in the United States, it must contain no less than 40 percent alcohol by volume (ABV); in the European Union, vodka must be at least 37.5 percent by volume.

3. Optional additives: While traditional vodka is flavorless, some vodka brands add botanicals, spices, or flavorings during or after distillation to achieve distinctive character in their liquor.

How Vodka Is Made

1. Combine the base ingredients. To make a fermentable base, vodka makers will mix grains—like wheat malt, flaked maize, or rye—with water and yeast. They then heat and stir the mixture (sometimes called “vodka mash”) to make sure it’s well combined and ready to ferment.

2. Ferment the base. Vodka makers then store their base mixture for a specified amount of time—often between one and two weeks—to fully ferment the mixture. This fermentation step is when the compounds begin to break down and produce simple, natural alcohol called ethanol or ethyl alcohol.

3. Strain the mixture. Once fermentation is complete, vodka makers strain off the liquid from the fermented solids. They’ll discard the solids and use the liquid (ethanol) to make vodka.

4. Distill. Distillation is a process that purifies a liquid by heating and vaporizing it, then collecting the vapor as it recondenses into a liquid. The resulting liquid is considered purer (since it leaves behind many impurities when it evaporates) and more alcoholic. Vodka makers all take different approaches to distillation—some may distill only once or twice, while others may require distillation and redistillation many times for a more pure result. If they’re making flavored vodka, they may also choose to add botanicals during distillation—some steep their botanicals in ethanol before or between distillings, while others add botanicals during distilling with a special still. 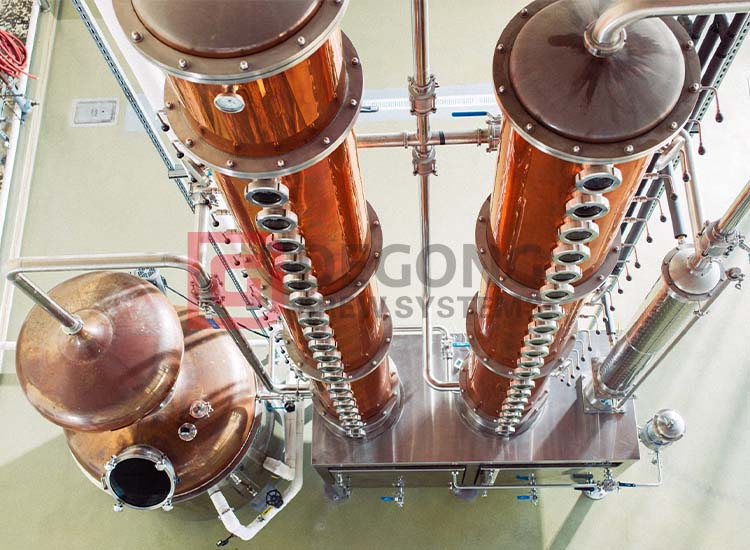 5. Collect and sort the product. The liquid that vodka makers have after distillation isn’t all the same—as ethanol distills, the resulting liquid changes. The first 35 percent of a distillation results in an ethanol product that contains methanol or acetone and can be highly volatile or toxic—containers of this liquid are called the “foreshots” and the “heads,” and distillers usually throw them out. The following 30 percent contains the “hearts,” which are the best product. The final 35 percent are the “tails,” which are impure but can be kept and redistilled for a little more product.

6. Filter. Since traditional vodkas are flavorless and smooth, many vodka makers will add an extra step to their production line—filtration. Once they’ve identified the hearts of their distillate, they’ll pass this product through a large filtration system (usually with charcoal or carbon) to ensure the final product has a great, clean mouthfeel.

7. Dilute. Once the distillers have their distilled product, they’ll dilute the vodka to the desired alcohol content by testing the alcohol by volume (ABV) and gradually adding water.

8. Bottle. The final step is the bottling process, in which vodka makers add the final product to labeled bottles.