English
High Quality Products Can Be Purchased.
You are here: Home » News » Some factors that affect the color of beer

Some factors that affect the color of beer

For beer aficionados and craft brewers alike, beer coloration is an important topic and one that is the subject of much discussion. By knowing which ingredients and which brewing processes are responsible for the color of a beer, it’s possible to come up with just the right combination for a certain color. In fact, it’s now quite common to find Color Flavor Wheels that claim to show you exactly what color your beer will be, depending on factors such as the hops, yeast, or malt being used.

Grain as a factor in beer coloration

On a fundamental molecular level, all beer should be red. So the fact that most beers are not red – they are usually either golden or brown in color – should tell you something: there is something very important happening at the molecular level that is responsible for the coloration of beer. The big reason why is the grain being used to make the beer. At the end of the day, grain is the strongest coloring agent, and these grains are colored by melanin, which results in a rust-red pigmentation. In order to change this color, then, you will need to undertake specific chemical processes.

Chemical reactions as a factor in beer coloration

There are two main types of chemical reactions that are used to change the color of beer: Maillard reactions and caramelization reactions. Maillard reactions are the types of chemical reactions that happen when you link amino acids to sugars, usually via intense heat. This heat will, in turn, produce a wide range of flavors and aromas. And it is also associated with a darkening of the beer coloration. This so-called “browning of grains” is the same thing that happens when you turn a piece of white bread into a piece of toast – the relatively intense heat of the toaster darkens the bread. And the longer you leave a piece of bread in the toaster, the darker it is going to be.

Maillard reactions are responsible for giving beers a sort of toasty flavor. While “toasty” might be the dominant flavor involved, a veteran brewmaster will actually be able to recognize hundreds of other perceptible flavors added as a result of the process. The important thing to keep in mind here is that both time and temperature play a role here, and simply by varying one of these factors, you can impact the coloration and aromas.

Caramelization, in contrast, is what happens when you heat sugar until it breaks apart. Of course, grains growing in the fields don’t contain sugars – so you first need to convert the starch in the grain into sugar with heat. Once that process has been completed, it’s time to raise the temperature even higher, so as to break apart the sugars that have just formed. The end result of this process is a caramel-like flavor, which can range from “burnt sugar” to butter or toffee. And, as you might expect, the longer is the caramelization process, the darker the beer will get. 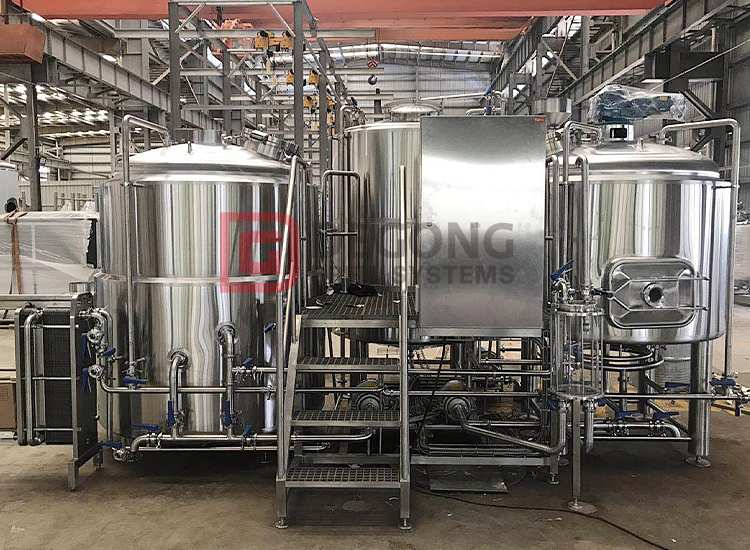 Time as a factor in beer coloration

Within brewing circles, there is a saying that “time is color.” What this means is that, as the beer ages, there will be perceptible changes in coloration. With aging, particles in suspension in the beer (e.g. yeast, polyphenols) begin to fall to the bottom of a vessel. As a result, the remaining beer will reflect less light and the beer will appear darker. Even without any other factors present, then, age will play a role in the coloration of the beer.

Oxidation as a factor in beer coloration

Another factor to keep in mind is oxidation or the act of oxygen interacting with the beer. Oxygen is a key component in the degradation of an organic substance, and it’s no different with beer. Just think of how oxygen impacts the color of a banana – leave your banana out too long, and it will start to turn the color brown! Or think about what happens to stale bread or stale fruit – the amount of oxygen in the air will result in first some “off-flavors” and then some very perceptible “bad flavors.” Oxidation is something to always keep in mind, and for some brewmasters, oxygen is always working against them when it comes to getting just the right color for a beer. For example, a deep red IPA that is much redder than it should be is probably that way because of excess oxidation.

Other factors in beer coloration

We’ve already looked at some of the key factors in beer coloration, such as the grains being used, time, oxidation and certain chemical processes. There are also several other factors that matter:

The longer a beer is boiled, for example, the more browning that you will achieve as a result of Maillard reactions. When it comes to pH level, the general rule of thumb is that a more acidic mash will always result in a paler beer. This is simply due to the chemistry of water. Hops also matter because they can leave behind polyphenols and acids. It is the presence of those extra particles that will create a haze in the beer, which then lightens the perceptible color of the beer.

While much is made of the color of a beer, the fact remains that color tells us disappointingly little about what a beer will actually taste like. As craft brewers like to point out, color can give us probabilities, but not certainties. In other words, it’s a safe guess that a lighter beer will have grainy flavors, while a darker beer will have cocoa or coffee flavors.

Also, there is actually no link between beer color and alcohol content. While the conventional wisdom is that lighter, paler beers are lower in alcohol, and darker beers are higher in alcohol (as measured by ABV), the fact remains that you can make a strong, double-digit ABV Belgian beer that is very pale gold in appearance – despite its very high alcohol content.

Thus, beer color is really all about expectations and probabilities. To really understand how beer is going to taste, you have to do more than admire its color – you actually have to open it up and drink it!