English
High Quality Products Can Be Purchased.
You are here: Home » News » Mixers For Brewing Beer, Winemaking, And Distilling

As far as the art of brewing, distilling, and winemaking is concerned, blending is critical to getting the desired flavor batch by batch. The manufacture of these beverages is essentially a batch process where the need for repeatability is critical.

Mixing is the controlled stirring of the ingredients. It must be done in such a way as to release the desired flavor without compromising the product. It is key to maintaining a consistent temperature profile and also has a major impact on process economics and profitability.

This article from DEGONG explains how to choose the right mixer for your brewing, winemaking and distillation process. While aimed primarily at readers from these industries, the guidelines provided are for anyone who needs to mix ingredients, especially those that are liquid.

The Importance of Correct Mixer Selection

Mixing is done for three main reasons, although often these are combined. The first is to disperse one ingredient in another. The second is to ensure an even temperature distribution throughout the mixing tank. Third, agitation is sometimes required to keep particles from settling to the bottom of the mixing tank.

In mixing for beverage production, and for any other type of product, the goal is a uniform blending of ingredients. Failing to achieve this almost certainly results in taste variation.

There should be no clumping (sometimes called birds eyes) or strings of material. When the tank contents is being heated, gentle agitation ensures an even temperature distribution. The goal is to counter the natural effects of convection within the fluid where hotter liquid rises to the top.

The mixing blades employed, along with speed of rotation, determine how much shear takes place. Shear, to summarize in a non-technical manner is a measure of the aggressiveness of the mixing. High shear can damage fragile solid ingredients. (One reason for using a high shear mixer is to pulverize solid ingredients into finer particles.)

Left running long enough, most mixers will eventually achieve a uniform distribution. However, excess mixing can affect taste as well as reducing productivity. When the mixer is correctly matched to tank and ingredients the time needed for complete dispersal is minimized.

Mixers for brewing beer, winemaking and distilling typically utilize impellers of the axial flow turbine type. In less technical terms, they consist of a propeller-like set of blades at the end of a shaft. The turbine, (also called the impeller,) is lowered into the tank and positioned near the bottom. At the top of the turbine shaft is the motor and gearbox.

Motors come in three types: totally enclosed fan cooled (TEFC), explosion-proof fan cooled (XPFC), and pressurized air motors. TEFC and XPFC motors typically operate at only a single speed, but can be rated and outfitted with a variable frequency drive (VFD) for multiple speed operation. An air motor can operate efficiently over a wide range of speeds, but has limited amounts of torque and excessive levels of noise.

Turbines or impellers have blades that move or pump the fluid either radially or axially. In a high shear mixer these blades are flat and tend to merge into a single disc. Such a “radial flow turbine” drags the fluid in the direction of rotation with centrifugal force throwing it outwards. Low shear mixers have a more familiar blade appearance.

Mixers and agitators are used through the brewing process. This starts with cereal cooking and steeping of grains in the mash tun, progressing through the actual brewing stage to fermentation and filtering. Brewing repeated batches of beer with the same taste demands very close attention to ingredient mixing and temperature maintenance.

Cooking is where cereal grains such as barley are mixed with enzymes and water before being heated. The mixture is usually quite viscous, so the mixer needs a high power motor. Typically 5 to 10 hp/1,000 gallons is appropriate.

In parallel, grains are steeped to provide the flavor. Initially, the mixer runs at a relatively high speed to ensure thorough wetting of the grains. Then for steeping the speed is reduced. Power is usually 1 to 4 hp/1,000 gallons. Low shear rates are essential to avoid chopping the grain husks into smaller fragments. These would cause filtration problems later in the process.

Steeped and cooked grains are then dropped into the mash tun. Here the mixture is heated, agitation being needed to ensure a uniform temperature throughout the batch. This mash is then filtered in a process termed lautering. The resulting water-like beer precursor is known as wort.

Wort then moves into the brew kettle where hops are added and heating concentrates the liquid. Agitation ensures even temperature distribution.

From the kettle wort passes through a strainer before entering the fermentation tank. Historically wort sat in this tank for two weeks, or longer when brewing lagers, while yeast turned it to beer and carbon dioxide. Today wort in fermentation tanks is subjected to gentle agitation to keep the yeast suspended rather than settling. This increases the fermentation rate, which has a positive effect on cash flow!

After fermentation beer is typically passed through a filtration process. Here a filter aid is typically used that requires precise mixing to produce a uniform slurry. 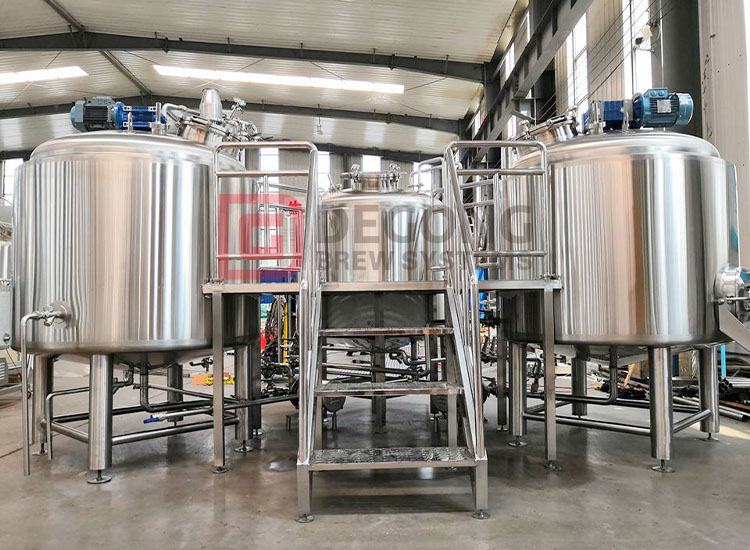 The first of these points is mixing of the grape must. (Must is the combination of grape juice, seeds and skin resulting from crushing.) Must is typically mixed with an axial flow turbine of 3 to 5 hp/1,000 gallons power.

The must is then filtered and the resulting juice chilled before passing into a fermenter makeup tank. This is where yeast and sugar are added. Mixing ensures these ingredients are thoroughly blended with the juice. An axial flow turbine-style mixer of 0.25 to 0.33 hp/1,000 gallons is usually sufficient.

On leaving the makeup tank the juice moves to the fermentation vessel. US winemakers tend to let the juice sit here although in Europe gentle agitation is common. This is generally provided by a small mixer of 0.125 to 0.25 hp/1,000 gallons.

Wineries do use mixers at other points during production. Syrups may need blending, filter aid preparing and so on. 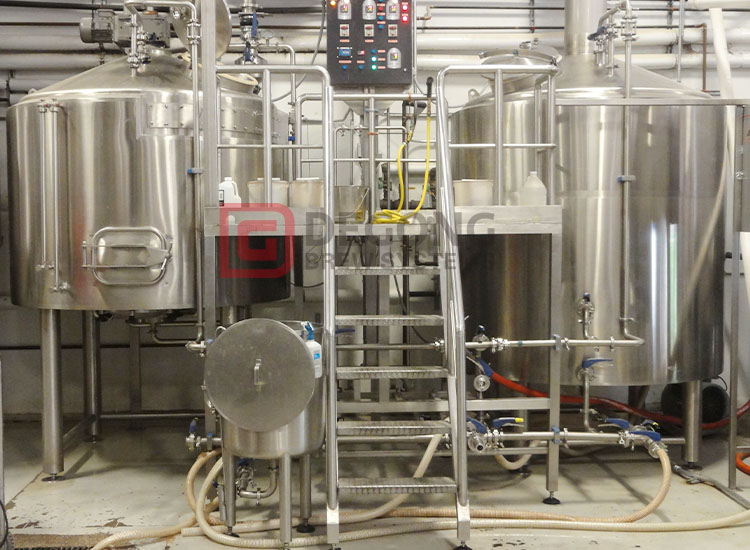 The process for distilling spirits is very similar to that for making beer. Some form of carbohydrate is cooked and mixed with grains and hops. After fermentation the mixture is distilled and aged.

As in brewing, cooking and steeping need controlled mixing and agitation. Fermenters are also often agitated to keep the yeast suspended. These mixers and agitators are typically the same as those used by brewers. 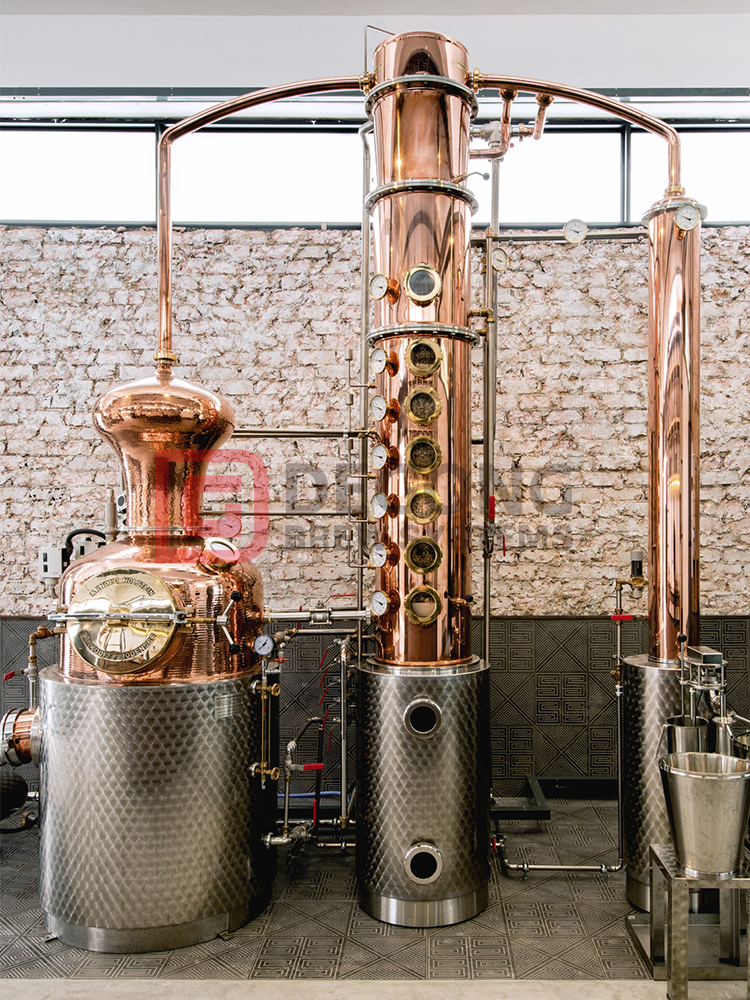