A microbrewery or craft brewery is a brewery that produces a small amount of beer. The microbrewery process terms are typically applied to breweries that are much smaller than large-scale corporate breweries and are independently owned. Such breweries are generally characterized by their emphasis on quality, flavor and brewing technique.

Brewing is the production of beer by steeping a starch source (commonly cereal grains) in water and fermenting the resulting sweet liquid with yeast. It may be done in a brewery by a Brewer.

Milling is the process where barley grain is made ready for brewing. In milling malt is milled or crushed to break apart this makes it easier to extract the sugars during mashing.

Mashing converts the starches released during the malting stage into sugars that can be fermented. The milled grain is mixed with hot water in a vessel known as a Mash Tun. In this vessel, the grain and water are mixed together to create a cereal mash. During the mash, naturally occurring enzymes present in the malt convert the starches (long chain carbohydrates) in the grain into smaller molecules or simple sugars (mono-, di-, and tri-saccharides). This "conversion" is called saccharification. The result of the mashing process is a sugar rich liquid or "wort".The mash temperature may be raised to about 75–78 °C (167–172 °F) (known as a mashout) to deactivate enzymes. 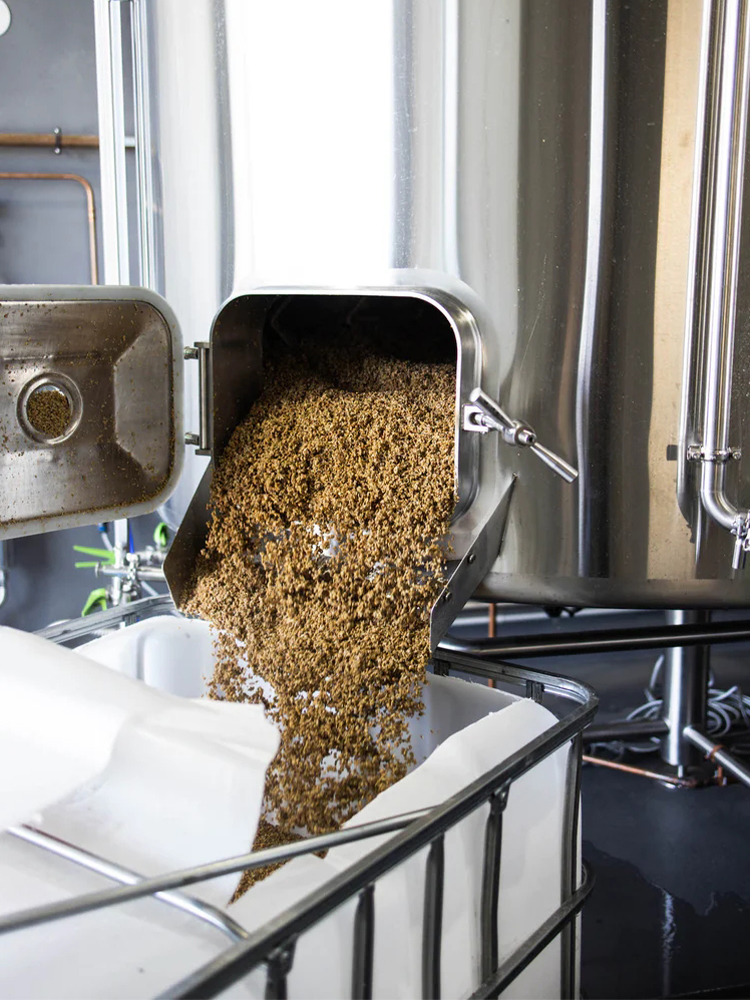 Boiling. The wort is moved into a tank known as a Wort kettle where it is boiled with hops. This stage is where many chemical and technical reactions take place, and where important decisions about the flavor, color, and aroma of the beer are made. The boiling processes serves to terminate enzymatic processes, precipitate proteins, isomerizes hop resins, and concentrates and sterilizes the wort. Hops add flavor, aroma and bitterness to the beer. At the end of the boil, the hopped wort settles to clarify in a vessel called a "whirlpool", where the more solid particles in the wort are separated out.

Fermentation takes place in fermentation vessels which come in various forms, from enormous cylindroconical vessels. After the wort is cooled and aerated – usually with sterile air – yeast is added to it, and it begins to ferment. It is during this stage that sugars from the malt are converted into alcohol and carbon dioxide, and the product can be called beer for the first time.

CCVs can handle both fermenting and conditioning in the same tank. At the end of fermentation, the yeast and other solids which have fallen to the cone's apex can be simply flushed out of a port at the apex.

Control system. when the brew house is equipped with the Automatic control system, most of the brewing process is performed automatically under the supervision of the brewer. The Control system allows manual control of wort production process by the brewer step by step.

Distribution of beer. After finishing of producing process the beer can be pumped into the serving tanks (bright beer tanks). There are the serving tanks substituted by the cylinder-conical tanks with the construction for over pressure to 1.5 or 3.0 bar.

In these special tanks is the beer cooled down. The beer placed in service tanks is intended for distribution and subsequent consumption. If the restaurant is part of the brewery, it is possible to serve beer directly into jars from serving tanks or from cylindrical-conical tanks.

Technological equipment. The brewery is also equipped with a set of facilities that provide heat and cold for functional vessels, brewery sanitation, handling of operating with fluids and drink. This includes malt mill, cooling units for the production of cold and ice water or glycol, plate heat exchangers, mobile CIP pump, hot water tank, tank for ice water or glycol, computer controller, touch control LCD panel, hoses and pipes, electrical wires, a gas distribution systems, a distribution system for heating and cooling media and others.