The hops may be added all at once; but more commonly, they are metered out in portions throughout the boil either at the start of the boil or near the end of the boil. Bittering hops are usually added at the beginning of the boil to maximize isomerization of their alpha-acid content and to drive off undesirable flavor compounds. Aroma hops are added part way through or at the end of the boil for the delicate hop flavor components. Some bittering hops contribute to hop aroma, even when added early in the boil.

The primary method used to get hop flavor and aroma in the beer is to add hops very late in the boil. This practice is called "late hopping," "late kettle hopping," "aromatic hopping," or "finish hopping."

The quantity of hops is determined by several factors: alpha-acid content, desired hop flavor and aroma in the finished beer, condition of the hops, efficiency of the hop extraction, brewing process, and type of brewing water. The hopping rate for bitterness can be calculated, whereas the rates at which hops should be added for flavor and aroma are less accurate.

One way of enhancing floc formation is through the addition of kettle finings. Copper finings (also referred to as Irish moss) is a form of seaweed consisting mostly of a complex starchy polymer called K-carrageenan. K-carrageenan, like polyphenols, has a negative charge and is effective in precipitating positively-charged proteins from the wort solution.

The rate of use of copper finings varies widely from brewery to brewery but generally is found in the range of from 10 to 80 mg/l (or ppm). The major reasons for the widely differing rates of use are variations in grist formulations, mashing systems, and specific gravities of the wort.

Copper fining products come in a range of physical forms and degrees of purification, including powders, tablets, granules, refined carrageenan, and alkali-washed seaweed.

Timing the addition of copper finings is essential because k-carrageenan denatures and becomes less active with prolonged treatment at high temperature.

Lactic acid can be added to lower the pH of the wort. Breweries produce the lactic acid in propagation tanks.

Calcium sulfate (gypsum) or calcium chloride is often added to lower the pH of the wort during the boil by 0.1-0.2 units.

Syrups and sugars can be added to the kettle in either dry or liquid forms.

Ale brewers, especially brewers in Belgium, sometimes add flavorings such as fruits, spices, and herbs to the brew kettle either during or after the boil. 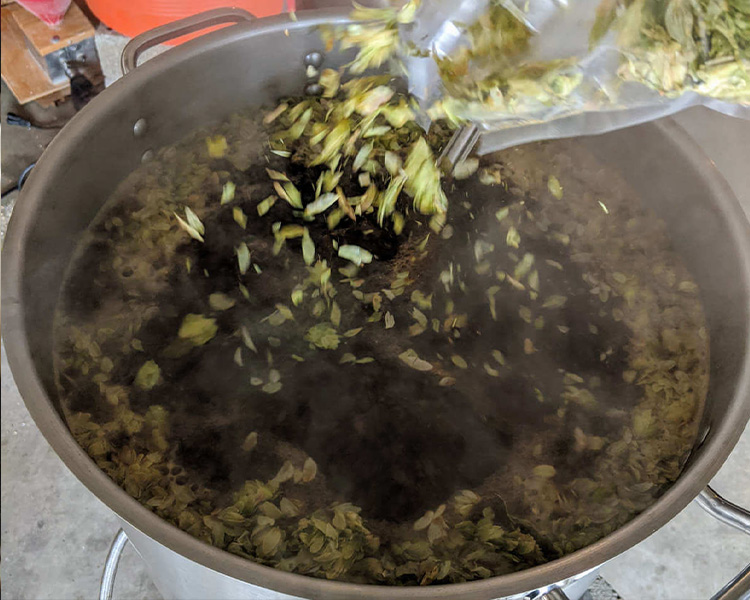