English
High Quality Products Can Be Purchased.
You are here: Home » News » How many different types of beer are there?

How many different types of beer are there?

What Defines a Style of Beer?

Nailing down how many beer styles actually exist is a nearly impossible task. It depends on who you ask, where they’re from, how long they have been drinking, and what they consider to be a beer style.

Looking at the names of different styles of beer can be useful in understanding why there are so many because beer style names come from a variety of sources.

The first and oldest source is the region and many old beer styles are named for where they developed. Depending on the local ingredients and the brewing traditions that developed over the generations, regionally developed beer styles can vary widely from one to the next.

For example, Kolsch is a style that grew out of the brewing tradition of Cologne, Germany and named for the German word for Cologne, Koln. Likewise, the Scottish ales obviously came out of Scottish breweries.

Beer styles are also often named for the ingredients in the beer. There are as many beer styles named in this way as there are ingredients, or adjuncts, to add to beer.

Raspberry wheat beer is an obvious example. Rauchbeir, or smoked beer, is another that is a little less obvious. The beer itself isn’t smoked, instead, the barley is smoked much like one would smoke meat before it is used for brewing this smoky treat.

A beer style’s appearance or quality can also lead to its name. Stout is a perfect example because it is a rich beer with big flavors - stout, indeed.

Wit beer is a popular Belgian style that is brewed with orange peel and coriander and served unfiltered. Wit is the Belgian word for white and alludes to the cloudy white appearance the beer has when poured into a clear glass.

Other examples of this include black lager, pale ale, and cream ale.

Brewing methods can be a descriptive way to name a beer as well and this is where it gets rather confusing. There are two major styles of beer - ale and lager - which are defined by the method used to brew them.

Hold onto this thought... most beers are either an ale or a lager. So, we can assume that a beer that uses either of those names alone has either taken the easiest way out of defining their personal style or there is nothing particularly distinct about the beer to require further definition.

Lager is a German word that refers to the practice of storing the brewed beer in cold storage for a long period of time before packaging it. Lagers, too, can be broken down to include Bock, Dunkel, Oktoberfest, and Pilsner.

Dry-hopped beers have had an additional dose of hops added after fermentation.

And, of course, there are a handful of beer names whose origin is unknown.

Porter is a good example of this. There are a number of stories that attempt to establish how the style got its name but, ultimately, none can be firmly established as the truth. 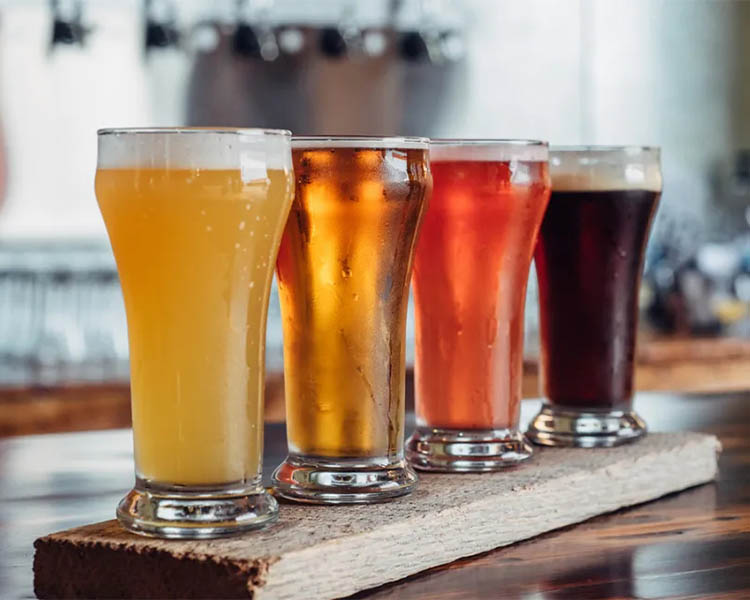 So, How Many Beer Styles Are There?

Beer has been developed and re-imagined over and over again through the ages and because of this, there are dozens and dozens of styles that have established themselves. So far in this article, over 20 different kinds of beer have been mentioned and this has barely scratched the surface.

Adding to the confusion, there new styles of beer emerge all the time. American pale ale, for example, is a play on the classic, hoppy British-brewed India pale ale. American pale ale, or APA, is similar to an IPA, but it uses more ingredients from the American brewing tradition like bright, citrusy hops instead of the woodsier, floral hops from Britain.

Does It Really Matter?

With so many different styles, some with only subtle differences from one to the next, it can seem a little daunting, not to mention unnecessary, to the average beer drinker. Well, to be honest, it kind of is.

The people who are mostly concerned with beer styles are those entering or judging beer competitions. In order to accurately and objectively judge beers, the styles need to be precisely defined. Americans seem particularly keen on this point with the beer competitions at big festivals like the Great American Beer Festival being responsible for the huge list of beer styles.

As a beer drinker, it’s helpful to be familiar with some of the broader style categories like stout, wheat or pale ale. It can help in deciding what beer to buy for a particular occasion or to pair with a nice meal. Knowing the difference between, say, a brown porter versus a robust porter probably won’t significantly enhance the average beer drinker’s experience.