English
High Quality Products Can Be Purchased.
You are here: Home » News » How does a plate heat exchanger work?

How does a plate heat exchanger work?

While brewers have traditionally used air circulation to chill their wort the modern brewery now just uses heat exchangers. While this means you can brew year round (hot days make for poor cooling),  less bacteria and yeasts from the air get in your brew and that it prevents dimethyl sulfide buildup (with its characteristic“cooked vegetable” taste) caused by a long cooling process, the main reason for a heat exchanger is  that it really makes your brew significantly faster.

If you’ve read about brewing you’ve probably heard about counterflow heat exchangers or counterflow chillers. These wort chillers are the most efficient way to cool your batch without massive refrigeration units. Any aspiring brewer should understand how they work!

A counterflow chiller is any heat exchanger that runs its cold liquor in the opposite direction of its wort.

This design runs your wort through the heat exchanger in the opposite direction of the cold liquid. As the hot wort enters one side of the counterflow chiller, it transfers its heat into the copper pipes around it, which in turn transfer it into the water running counterflow. The water has already had significant time (all the time it takes to get from one end of the chiller to the other) to absorb heat from the wort at this point, so it’s already quite warm - though still cooler than the hot wort. As the wort runs down the line, the water in the pipes around it get increasingly cooler - all the way down to the original water temperature. In theory this would allow an infinitely long chiller to cool wort to the temperature of the water being used in it.

However, once you start dealing with serious amounts of beer, this kind of wort chiller just doesn’t cut it! You need something a little more efficient, and a little easier to clean. Fortunately, the same concepts can be applied at a larger scale using...

Probably the most popular form of heat exchanger you’re going to find in a brewery, the plate heat exchanger is a highly efficient and compact unit, the use of which is only really limited by its inability to handle differing pressures between plates. This makes them less useful for condensation or other industrial applications, but PERFECT for liquid to liquid applications such as chilling wort.

How does a plate heat exchanger work? 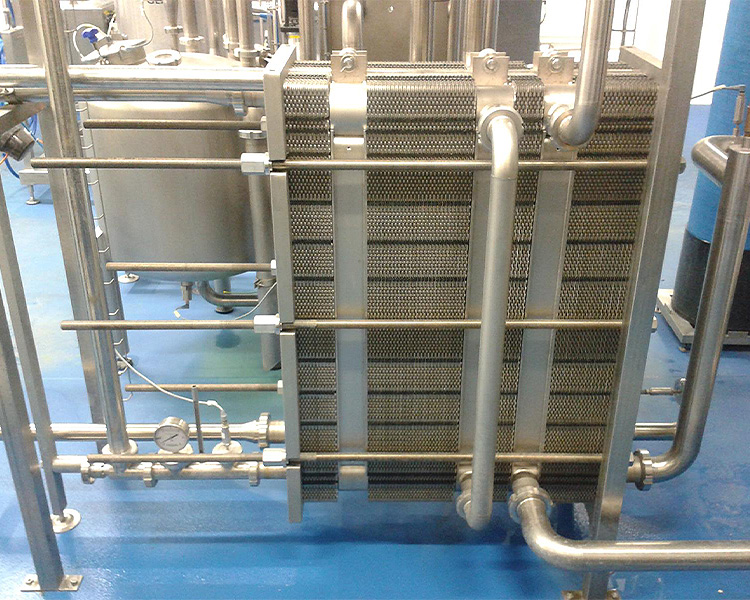