The Distillation of Alcohol – A Brief History

If you like good alcoholic drinks (such as whiskey), you probably asked yourself more than once where and how everything started. And, if you are one of the people so fascinated with good spirits, you probably also have a moonshine still somewhere, in your home. Hence, even more reasons to find out about the history of alcohol distillation.

Give a Thank You to the Arabs

You may be surprised, but the beginnings of distillation are actually attributed to the Arabs, as they came up with the idea of pure distillation, somewhere around the 8th - 9th centuries. Surprisingly for these people who are not allowed to drink, they took their passion quite seriously and found pleasure in distilling alcohol and making only pure, great alcoholic beverages. Distillation existed in the area since 500 B.C., but you can thank chemistry, especially that performed by Persian and Arabs, for what distillation is today.

The word itself, however, comes from the Latin “de-stillare”, which basically meant the process of separating the liquid by vaporization and condensation; Aristotle was, actually, one of the first people who suggested the idea of distilling spirits (thou, the world had to wait for the Arabs to implement it).

Now, if you are also curious about the word “alcohol”, then you will be happy to know it was used in the English vocabulary since the 16th century. The term, however, traces its roots back to the Arabic “al-kohl”, with “al” meaning “the” and “kohl” representing that powder used as eyeliner by ladies (a term still in use today). “Al-kohl” (or “alcohol”, as we use it today), would, hence, start as a medical solution to ail the eyes. It became more of what is known of it today - meaning a liquor - only somewhere in the 18th century. 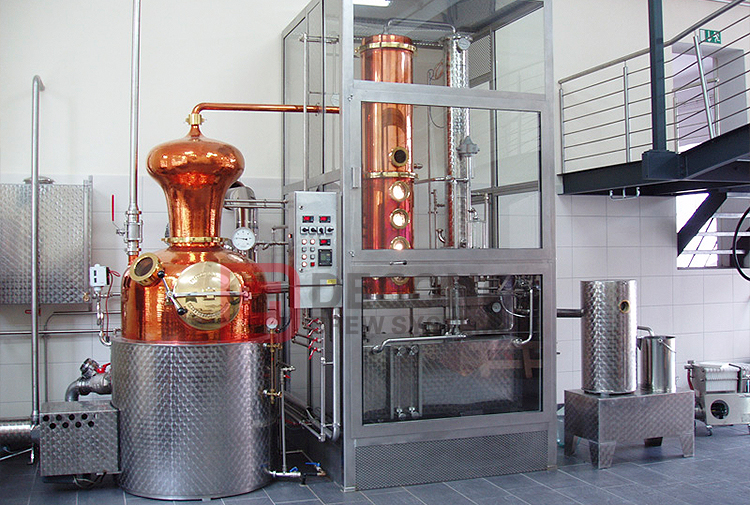 And, because you cannot have the distillation of alcohol without the vase in which you do it, the alembic was invented. Apparently, its roots are somewhat still dubious, as some people trace its history back to the years 200-300 A.C., in Egypt (where, you might be surprised, but it was created by two sisters), while others believe it appeared in the same time with the distillation process, in the 9th century, on the Arab soils. The word, however, comes from the Greek “ambix”, meaning a pot with a small mouth, which was changed by the Arabs into “ambic”, which, in combination with the “al” mentioned above, lead to the name of “Al Ambic”, later Europeanized as Alembic.

Distillation around the World

But distilled alcoholic drinks were not found only on the Arab territories, but also in Japan, where Shochu was distilled from sake, in India, were they made Arrack from molasses and rice, as well as in what is now known as Georgia, where Skhou was made from mare’s milk. Hence, distillation was of big importance on the Asian continent.

On European soil, the romans are considered the first to distill alcohol, mainly wine, while, later on, states like Spain, Portugal or France started the heavy process of distilling spirits only after the contact with the Arab world.

Real distillation, more or less as we know it today, entered profoundly in Europe, during the Middle Ages, with the first distillation of alcohol being noticed in the 12th century, in Salerno, Italy. Brandy will appear in the first half of the 1400, and all distiller spirits were becoming more and more popular every day, as they were considered medical remedies for the Black Death.

The process of distillation has not suffered major changes since it has appeared, with the classical, typical alembic copper stills being widely spread not only on the European continent, but also in America. The traditional methods are still employed, being considered way better than modern techniques, especially by those who make a passion out of distilling alcohol and creating moonshine, for example.