English
High Quality Products Can Be Purchased.
You are here: Home » News » 新闻资讯 » What is the production method of low-alcohol beer?

What is the production method of low-alcohol beer?

In recent years, with the development of the beer equipment industry, the domestic demand for beer has slowly become larger, and people have also put forward higher requirements and new standards for the quality of beer. Alcohol-free beer is favored by the majority of consumers. Low-alcohol beer refers to special beer with an alcohol volume fraction value lower than normal beer, such as alcohol-free beer and low-calorie beer.Alcohol-free beer refers to special beer that has gone through the whole process of normal beer production but the alcohol volume fraction of the beer is less than 0.5%.Because of its low alcohol content, alcohol-free beer is very suitable for drinking in social situations, and it is also suitable for some people who are not suitable for drinking, such as ladies, drivers, athletes, teenagers, children, people with alcohol allergies and other consumer groups.It is understood that the alcohol-free beer launched by Switzerland has been produced successively in the United States, Germany, the United Kingdom, Japan and other countries, and has undergone great development.Beer manufacturers have begun to use low-temperature vacuum distillation technology to produce alcohol-free beer.

1. The brewed finished beer is heated.

2. During the heating process, the evaporated alcohol is recovered by the cooler of the home-brewed beer equipment; the distillation temperature should be appropriate, generally 79~80℃, which is the appropriate temperature for alcohol evaporation.

3. While recovering alcohol, the carbon dioxide emitted and the flavor components of beer are also recovered. 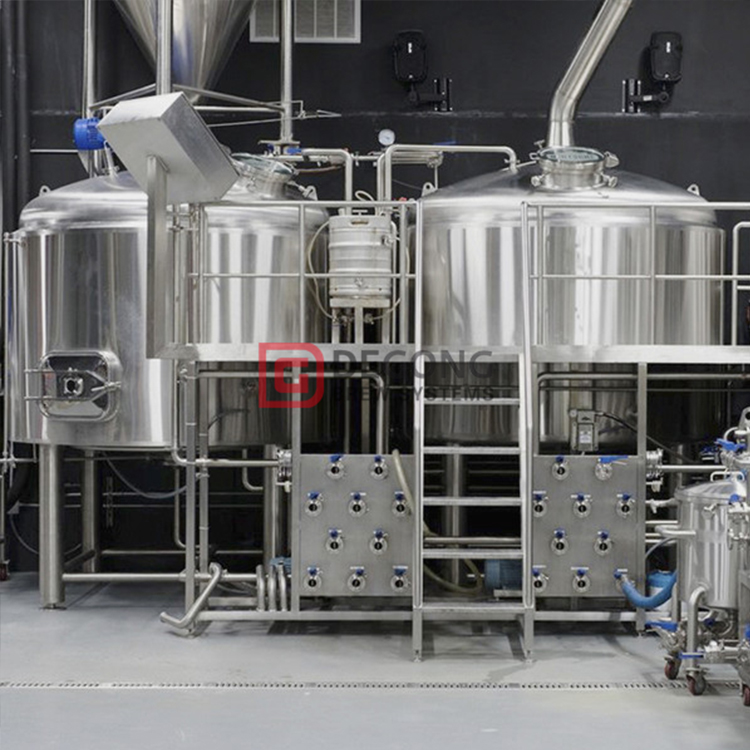 4. When the alcohol content in the beer drops below 1%, stop heating and cool it.

Another distillation method is to add 30% water to the distillation kettle first, heat it to boiling, and then slowly add the finished beer. However, the boiling state of the distillation kettle must be maintained during the process of adding beer. At the same time, a small amount of hops must be added to control the foam and contribute to the formation of thermal coagulants. When the alcohol content reaches the requirements of alcohol-free beer, stop boiling, after cooling, and then add carbon dioxide to make alcohol-free beer.

The key to the production of low-alcohol beer is to require a low alcohol content, but the unique flavor of the beer must not be less, and other quality characteristics must also be guaranteed.

One is to control the amount of alcohol produced during beer fermentation in home-brewed beer equipment within the required standard range, such as Lu's yeast method, pasteurization method, high temperature saccharification method, etc.At present, it is normal to use yeast that has been induced to mutate to produce alcohol-free beer. It can reduce alcohol (convert to esters or organic acids, etc.) or basically produce no alcohol during the fermentation process. It can make the wort ferment normally without bad flavor and harmful ingredients. The volume fraction of alcohol in fermented and mature beer is ≤0.5%.

The other category is to remove the alcohol from normally fermented beer by various means to meet the requirements of the standard, such as decompression evaporation method, reverse osmosis method, dialysis method, etc.