English
High Quality Products Can Be Purchased.
You are here: Home » News » Why Is Belgian Beer So Good?

Why Is Belgian Beer So Good?

Is Belgium truly the home of the best beer on the planet? Or, is it Germany, home of tall steins and Theresienwiese (better known as Oktoberfest)? Some would argue that the Czech lager is the winner, or that Irish stout takes the cake. You can’t forget about British or American ale either.

However, it is a fact that nobody can ever deny how good Belgian beer truly is. But why is Belgian beer so good? After doing some digging, it seems that everyone loves Belgian beer for one reason or another.

Belgian beer is so good because of the taste, the mastery behind the brew (think – hundreds of years of Trappist monk knowledge combined with modern technology), and the fact that most Belgian beers are fermented twice. So, with that being said, Belgian beer is carrying centuries of wisdom and flavor! And, since most strong Belgian beers are fermented twice, they have more probiotic yeast inside of them which kills bacteria in the gut. Many describe the taste of a Belgian beer as floral, sweeter, and much less harsh than other traditional beers that are considered bitter.

So, pull up your barstool and grab yourself a Belgian beer. They taste amazing!

What Makes a Belgian Beer?

Belgian beers are ales. Ales are fermented differently than lagers. A lager is fermented with bottom-fermenting yeast in much colder temperatures than ales. When the ale is fermented, it is done with top-fermenting yeast around 60°-70°F compared to the 35-50°F that is required to make a proper lager. Belgian beer tends to be malty, fruity, and have a stronger yeast flavor than lager.

Breweries in Belgium take their beer very seriously and they know the true importance of the fermentation process happening spontaneously. When spontaneous fermentation takes place, the wort is open to fresh air which allows bacteria and yeast to thrive inside of the beer. Bacteria and living cultures found inside of beer die off long before bottles make it into the tavern, or into our homes. Acids that come from the hops process of brewing are responsible for making that happen.

But when it comes to Belgian beer, this process goes right out the window. Belgian beer does have live probiotics in them. Since Belgian beer is fermented twice, things can be a little bit trickier. Traditional Belgian beers like Echt Kriekenbier, Westmalle Tripel, and Hoegaarden are perfect examples of beer with live cultures and probiotics. 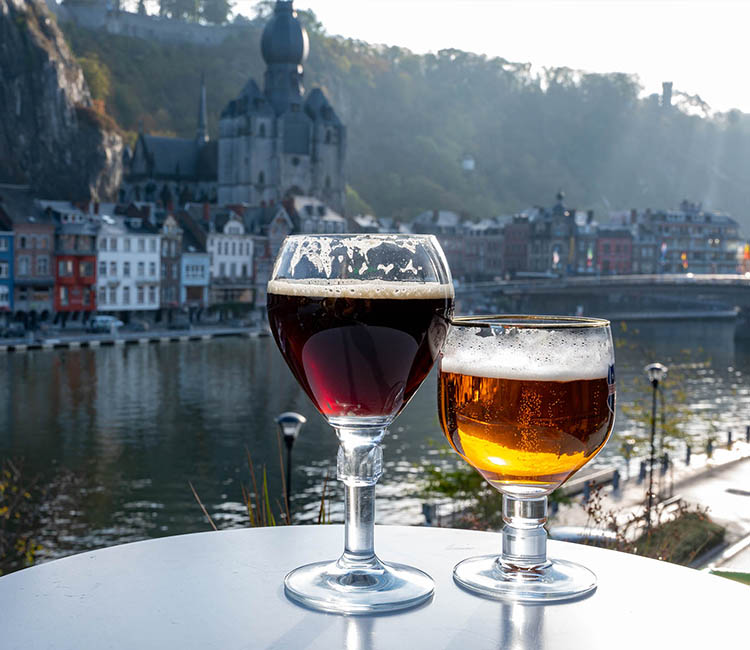 What is Belgian Trappist Ale?

Before Belgium was a country of its own, it was kind of half Germany & half France with the influence of the Holy Roman Empire. And that is where the monks come into play.

Around 1100 BCE, the monks and members of the Roman Empire were using local Abbey’s to brew beer. They would then sell the beer and use their profits to support the church. Through this process, they became what we know today as brew masters.

700 years later, when the French Revolution took place, monks from Normandy began to flee. They chose Belgium as their sanctuary. The monastery they came from was known as La Grande Trappe. La Grande Trappe, also known as La Trappe Abbey is known as the monastery where the Trappist monks originally resided. The Trappists brewed their abbey beers out of tradition and continued doing so well after the French Revolution.

What is the Best Belgian Beer Ever?

Stella Artois may come to mind if you think of Belgian beer. Despite some people thinking that it is from France, it is actually from Belgium. Stella Artois was first brewed in Leuven, Belgium just east of Brussels. Researching Belgian beer has to lead me to wonder what the best ever Belgian beer is! Watch out, Stella! Westvleteren is coming through. If you were to go to Belgium, the number one beer that you would need to try is Westvleteren 12.

According to beeradvocate.com and ratebeer.com Westvleteren, 12 is the absolute, number one, true Belgian beer. The distribution of this beer, however, is not exactly mainstream. It is quite hard to get your hands on it! You can only get it by going directly to the monastery that brews this specialty beverage. The only other option would be to visit a local tavern or gastropub that is near the direct vicinity of the monastery of the Westvleteren Trappists. If you’re feeling like you’re up for a trip to Belgium to try its famous trappist beers, this is a place you must visit so you can try Westvleteren 12.