English
High Quality Products Can Be Purchased.
You are here: Home » News » The working principle of the chiller

The working principle of the chiller

What Is a Chiller?

An industrial chiller is a refrigeration system used to lower the temperature of machinery, industrial spaces, and process fluids by removing heat from the system and transferring it elsewhere. Industrial chillers are essential for temperature regulation in several industrial processes, such as injection molding, metal plating, oilfield production, and food processing.

Industrial chillers work based on the following principles of operation.

How Does a Chiller Work?

An industrial chiller system is driven by one of two operational principles:

Heat absorption chillers integrate heat exchangers that pull heat away from any associated processes and dissipate them exteriorly. Heat exchangers are typically composed of piping containing coolant fluids (air, water, or a mixture of water and other liquids).

Vapor compression chillers achieve a cooling effect by circulating coolant in pipes through the processes requiring cooling. This will pull heat from any associated processes into the coolant, which is then circulated to a refrigerant system that cools the chiller fluid and prepares it for a new cycle of process cooling.

Chillers consist of four essential components; an evaporator, a compressor, a condenser, and an expansion unit. In addition, every chiller system contains a refrigerant.

The process starts with a low-pressure refrigerant entering the evaporator. Inside the evaporator, the chiller refrigerant is heated, causing it to undergo a phase change into a gas. Next, the gaseous refrigerant goes into the compressor, which increases its pressure.

Consequently, this lowers the pressure of the refrigerant and begins the cooling process again. The entire process is known as the refrigeration cycle. 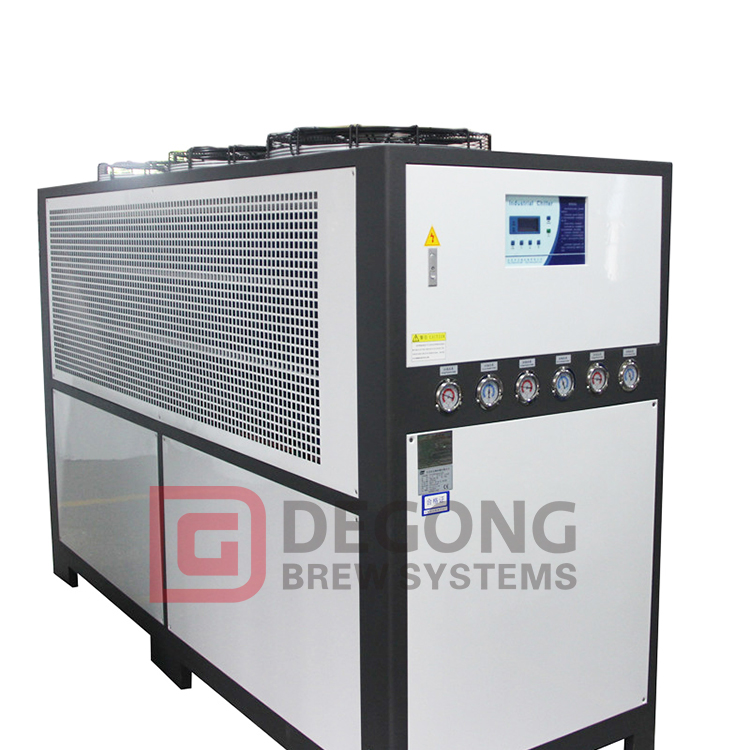