English
High Quality Products Can Be Purchased.
You are here: Home » News » The Distillation in the Pot Still

The Distillation in the Pot Still

The Principle of Distillation

The following chart shows the principal setup of a Scottish Malt Whisky distillery with two pot stills. Distilleries with three pot stills and triple distillation are extended by one step correspondingly. Many large distilleries have four, six or more pot stills, which aren't operated in series but in parallel.

The chart shows a simple distillery with a wash still and a spirit still. 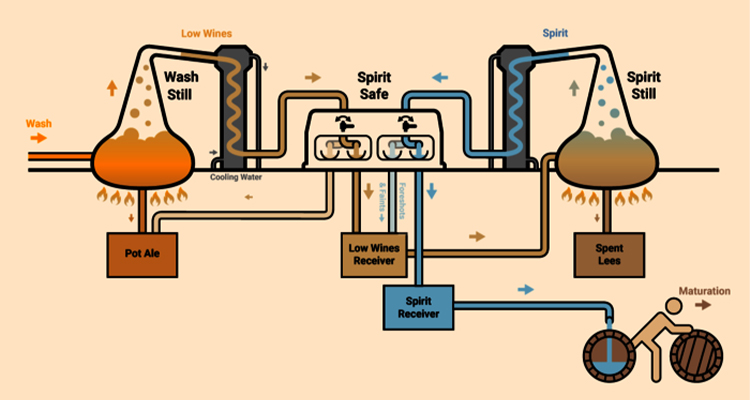 The wash still has a simple task: It is used for the first distillation of the wash, or in plain English: the beer. The capacity of the stills and the wash backs is usually coordinated.

When hot steam is led into the heating cylinders, the wash still starts to heat the wash. Through the heat movement (convection) inside the still the wash is turned. The wash rises along the warm areas of the cylinders and sinks back along the cooler areas.

After some 30 minutes it gets interesting: Above the heating cylinders the liquid starts to boil, and light substances (predominantly flavour-carrying esters) rise into the air above the liquid level.

The constant supply of gaseous substances leads to a slight overpressure in the still, and the gases rise into the neck of the still. But they don't get far. The wall of the still is still too cold, and the evaporated substances condense at the wall. As time goes by more and more droplets accumulate at the wall and form bigger drops that flow back into the pot.

With rising energy input the whole wash starts to boil at a temperature of approximately 173°F (78°C). The whole still heats up, and the liquid surface becomes turbulent. The high heat input generates mighty bubbles, and the liquid foams and splashes up to the upper part of the neck.

That's why wash stills have small windows in the neck, through which the bubbling wash can be watched. For if the boiling temperature of the wash is too high, liquid can get into the condenser via the lyne arm. This wouldn't be so bad if the wash didn't contain solid parts of the barley grains, which clog the thin pipes of the condensers.

Therefore the stillman must be watchful. Distilleries that don't have the time for watching the boiling put soap into the wash, which destroys the surface tension of the wash and prevents it from boiling over. Since the soap liquefies at 122-140°F (50-60°C) and only boils at temperatures far exceeding 212°F (100°C), no soap molecules can get into the distillate.

The distillation usually ends after 4 hours. Except for 1% abv, all alcohol has evaporated and has been collected in the low wines receiver.

However, the low wines receiver doesn't contain only alcohol but also all substances with a lower boiling point than alcohol, as well as some substances with a higher boiling point. They have been torn out of the molecule groups by the bubbling liquid and have been pulled into the low wines receiver together with the light alcohol molecules. Among these molecules is also plenty of water, which forms an azeotrope with the alcohol. After the first distillation the low wines typically have an alcohol content of 20% to 25%.

After distillation the pot ale (also called spent wash) remains in the wash still. It has a residual alcohol content of approximately 1%. However, not only alcohol but also valuable proteins and minerals from the barley grains remain in the pot ale. That's why after emptying the still the pot ale is concentrated through evaporation and sold as high-quality animal feed.

Since the large pot stills only have a wall thickness of a few millimetres (ca.3/16") they are very sensitive to overpressure and negative pressure. The worst-case scenario is therefore the collapse of a still caused by negative pressure. When the distillation has been stopped, the pot ale is drained and the pot still cools down, negative pressure is created inside. If it becomes too high the pot still implodes with a loud bang. Since this happened more than once in the past, every pot still now has an automated pressure relief valve that keeps the pressure balance with the environment. For filling and draining the stills, there's another vent valve, which is usually operated simultaneously with the pumps.