English
High Quality Products Can Be Purchased.
You are here: Home » News » Step mashing - what is it and why is it?

Step mashing - what is it and why is it?

Step mashing is a technique that was developed by brewers at a time when malts were less well modified than they are now. When malting takes place the aim is to break down glucans and proteins, making it easier for home brewers to extract sugars. By performing different rests at different temperatures, brewers could perform some of this modification in the mash, increasing the amount of sugar they could extract from the malt and therefore increasing their efficiency.

Most home brewers now will not bother following a step mash schedule because malts are so well modified that the general consensus is a step mash will not increase conversion by any great amount. However, there are reasons beyond conversion that you might want to perform a step mash.

Certain temperatures are supposedly key in things like breaking down beta glucans (gummy parts in the cell wall of barley), lowering the pH of the mash or breaking down proteins. There is some evidence that by performing a rest between 43-45°C (109-113°F) you can increase ferulic acid in the wort which is a precursor to clove phenols that you may want in a Wheat beer or Hefeweizen.

So how does mashing at different temperatures affect the wort in these different ways?

It all comes down to enzymes. An enzyme is simply a protein with a special, specific structure which is capable of accelerating the breakdown of different substrates (a molecule on which enzymes can act). Enzymes speed up chemical reactions without undergoing any permanent chemical change themselves, meaning an enzyme is not ‘used up’ in the chemical reaction. 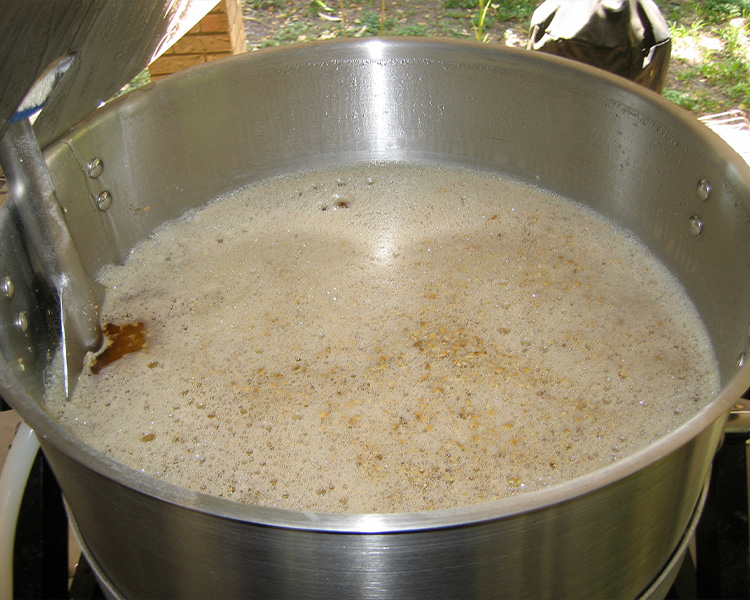 So what temperature steps should we be interested in?

35-45°C (95-113°F) The Acid Rest – The acid rest is a step designed to lower the pH of the mash (by which we mean make it more acidic). Due to the temperature range this step can also be useful for breaking down beta-glucans which can be useful if using a high proportion of wheat or oat malts. An acid rest works because at this temperature, phytase enzymes are actively breaking down phytin molecules. This releases phytic acid which lowers the mash pH. The heat used in the malting process is enough to destroy most of the phytase present so an acid rest will only work in extremely lightly kilned malts and an acid rest takes at least an hour before there is any significant change in mash pH which is why this rest is not more widely utilised today or if it is, it is for the beta-glucan breakdown effects rather than mash pH effects.

43-45°C (109-113°F) Ferulic Acid Rest – In beer, a molecule called 4-vinyl-guaiacol (catchy) is credited with giving beer a clove-like aroma that is desirable in some styles. Ferulic acid is a pre-cursor to this molecule which is normally bound to other molecules present in the wort. By performing a rest in this temperature range you can release more ferulic acid into the wort, giving you more of the precursor to 4-vinyl-guaiacol.

44-59°C (113-128°F) The Protein Rest – If you have too many long chain proteins present in your wort you may find you have issues with protein haze and instability if you store your beer for any period of time. Conversely you require some medium chain proteins in your beer as they help with head retention and body in the finished beer. Implementing this rest theoretically breaks down protein chains into shorter chains. It is best avoided unless you are using malt that is very high in proteins as with most well modified malts, a rest at this temperature is only going to negatively affect head retention.

61-71°C (142-162°F) The Saccharification Rest – The required rest for brewers, many homebrewers will utilise just one extended rest (60 minute) within this temperature range. The purpose of the saccharification rest is to convert starches to sugar. Two enzymes are important here, alpha-amylase and beta-amylase. Alpha amylase is most active around 68-72°C (155-162°F) and breaks starch molecules up at random points, creating long chains which results in a sweeter, fuller-bodied beer.

Beta-amylase on the other hand is most active from 60-63°C and breaks starch molecules at the branches, creating much shorter chains. This is a good way to produce highly fermentable worts for drier finished beers.

So there you have it. Step mashing is not required in order to improve conversion but there are many other reasons why you may want to utilise some steps in your mashing. Similar to decoction mashing, many people don’t do it but those who do swear that it is the ‘secret ingredient’ to their beers.