The Necessity Of Cleaning Beer Equipment

During the production process, some dirt may be deposited on the inner surface of each container and pipe due to various reasons. Dirt particles include oil, dry yeast, hop resin, beer stone, protein and minerals. They adhere or deposit on the inner surfaces of equipment and pipes, making the surface rough and difficult to clean, and also providing a place for bacteria to grow. At the same time, the effect of fungicides is reduced.

The main purpose of CIP cleaning equipment is to wash away the fouling film and deposited minerals formed by the above proteins and carbohydrates as much as possible. But, since the bactericide can only kill the bacteria on the surface of the dirt, the bacteria that survive inside may also multiply and cause re-contamination, so the entire colony must be cleaned before sterilization.

For craft beer equipment of 2000L and below, CIP cleaning equipment is generally only equipped with lye tank and disinfection tank. There are two specifications of 50~100L, which are enough. Installed on a stainless steel trolley, it can be moved to a certain equipment to be cleaned for cycle cleaning. Because the hose is connected and close, the cleaning fluid is less lossy, so it is very suitable for this kind of small-capacity craft brewing equipment, and the cost is not high and it is very practical.

There is an electric heating tube on the lye tank, and with the control box on the cleaning car, the heating will stop when the set temperature is reached. In the case of heating, the cleaning of organic matter is very thorough, and after cleaning, the used lye is returned to the tank.

The disinfection tank is a single-layer container that does not need to be heated. Like the lye tank, it has a hand hole, which is convenient for adding bactericides. Food-grade hydrogen peroxide at a concentration of 0.5~1% is usually used for circulating sterilization. After washing, the hydrogen peroxide can be decomposed into Water and oxygen, so there is no need to rinse with sterile water, which saves time and effort, and is very convenient.

In general, this combination of CIP trolleys is still very cost-effective. With the gradual development of automation technology, automatic control of the cleaning process composed of PLC and touch screen has also emerged, which can meet the requirements of some users with higher automation requirements.

There is many CIP equipment used in craft breweries, generally equipped with acid tanks, lye tanks, disinfection tanks, sterile water tanks, and hot water tanks, which are placed on the ground and fixed.

The above describes the composition and function of the CIP equipment in the craft beer workshop and the craft microbrewery . I hope it can help you who are confused when purchasing beer equipment. 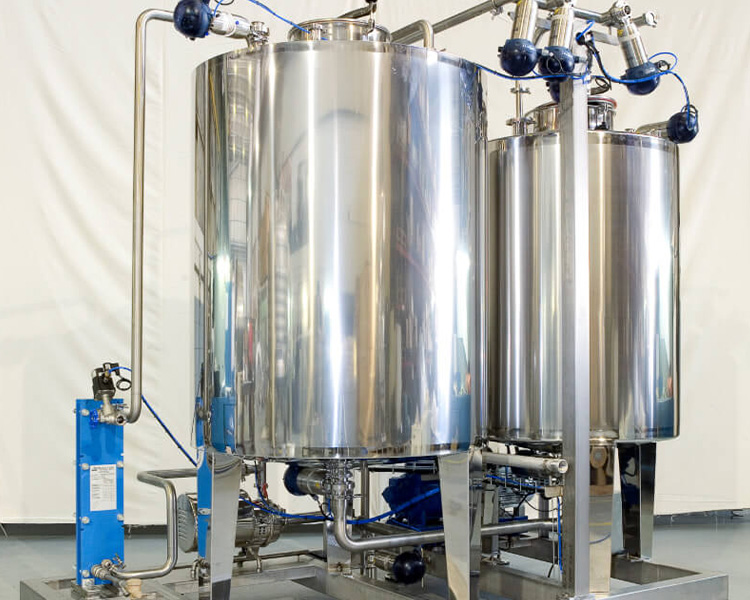