Distilling equipment like traditional pot stills and continuous column stills are gaining more popularity as the spirits industry rises simultaneously — but which distillation still does one choose for their distillery?

Spirit distillation isn’t the easiest process, but when you nail down the type of distillation still you’re going to use, it becomes a bit less complicated. When choosing between a traditional pot still and a continuous column still, you need to ask yourself a series of questions.

What type of spirit are you making?

What ABV do you want the spirit to achieve?

Are you producing it batch-by-batch or on a larger scale?

Do you want to consider yourself a “craft” distillery?

Once you’ve answered these questions, you can better determine if a traditional pot still or a continuous column still is the way to go. Keep in mind that even though you might find the best still that works for you — it’s important to note that no best still exists. It’s all dependent on your goals, procedures, and specific business model.

Some distillers hold the difference between the type of distillation still used to a high standard — claiming that the only difference in a spirit comes down to those that come off a traditional pot still and those that come off a continuous column still. But we also know that aging, base materials, and so many other factors play into the final product. When starting with that first step of distillation though, there’s quite the difference between pot stills and column stills.

Distillation, at its simplest, is when heat is applied to a liquid, vaporizing the alcohol in said liquid, and then cooling that gas to condense it back into a liquid. But in what mechanism are you choosing to complete that process in — a pot still or a column still? 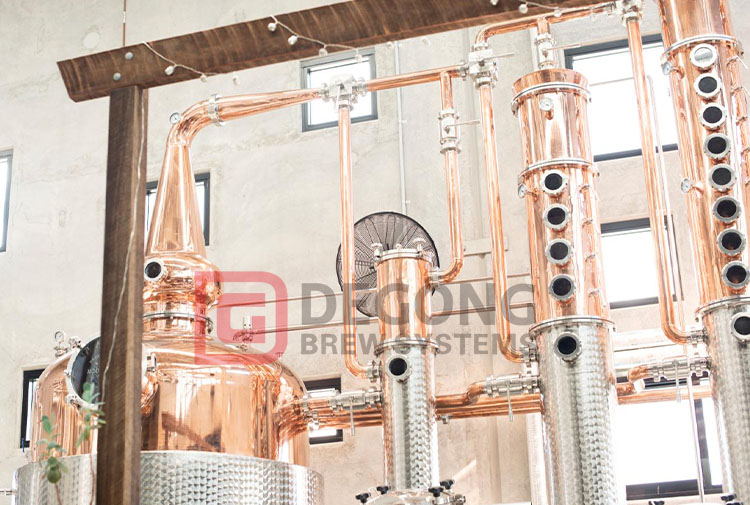 Pot stills are often romanticized, and for good reason! These copper-crafted kettles date back to the 15th century and are typically seen when a distillery is crafting batch spirits. Pot stills are used to make more flavorful spirits, including cognac, whiskey, rum, and scotch. The ABV of pot still spirits is lower than column stills due to the flavorful organic compounds found in the spirit. Pot stills are also seen in much smaller quantities across the world, and will be used for batched distilling only.

Continuous column stills are used much more regularly than pot stills, and are more efficient than their romanticized counterpart. The alcohol by volume (ABV) of a column still distilled spirit is higher, making it cheaper to produce, but with less room for subtleties like flavor and texture. Vodka, white rum, and gin are all made using continuous column stills. This type of distillation can also be continuously run, whereas pot stills are batch-made only.

Both pot stills and column stills have been used for distillation for hundreds of years, and they both can create a unique, delicious, easy-drinking alcoholic spirit. Of course, if you talk to any distiller out there, they’ll have a preference for which still they use. So making a decision is easiest when headed directly to the source — a manufacturer who specializes in both pot stills and column stills, so the bias that exists in the spirit industry is muted as you make a decision.

If you’re dabbling in the idea of starting a distillery or adding on to your already established one, you want to be able to see the benefits of both pot stills and continuous column stills — and preferably, by someone who knows distilling equipment. With a specialty in handcrafted distilling equipment and systems, their approach to guide someone down the best path is incomparable. Whether you decide to use a pot still or a continuous column still, DEGONG has the skill, experience, and passion for helping future distillers and expanding distillers pick the equipment that best suits their needs.