This article presents the similarities and differences between brewed beer and distilled alcohol for informational purposes only. Distilling alcohol at home is currently illegal in many countries, so you must be aware of all laws in your area regarding the production of alcoholic beverages.

Home winemakers often ask us if making our own spirits—whiskey, vodka, rum, etc.—is much different or more difficult than making wine or beer. This is a difficult question to answer because the distillation of spirits is a process just like brewing beer or wine is a process, both of which consist of several steps. For example, whether you're brewing beer or distilling whisky, many steps overlap. At the same time, both processes have unique steps dedicated to brewing beer, brewing or distilling spirits. It even boils down to what you're brewing or distilling.

We have attempted to include the steps taken by the most engaged home brewers in the information below. However, most home brewers and winemakers should be able to use this guide to judge for themselves whether distilling spirits is more complicated than their current procedures.

Note that the following descriptions are simplified versions of each step, focusing on beer brewing and whisky making for convenience.

Malting is the process where grain, usually barley, is soaked in water, germinated, and dried. Grain is used as the base for both beer and whisky. Although you can technically do your own malting at home, most home brewers will purchase pre-malted grain from a homebrew supply store.

Milling is a fancy word for crushing the grain. Many home brewers own a grain mill for crushing their grain at home, but most homebrew stores can also crush the grain for a small added charge. So although milling is part of the process in producing both beer and whisky, it is not a step that hobbyists must complete themselves.

Yeast (which is part of a later step) isn’t very efficient at breaking down or converting long-chain sugars, and starch is a long chain sugar. Mashing is where you combine your milled/crushed grain with water that’s warm enough to activate the enzymes, which chop up the starches into short-chain sugars. This step is generally only part of all-grain recipes. Often, the home brewer or distiller will purchase malt extract, which is simply a ready-to-go alternative.

Sparging is a fancy word for rinsing, and is done to separate the sugar from the solids, and also reduces the potential alcohol. In all-grain recipes where the brewer/distiller mashes the grains, like in the previous step, you will rinse the grains. This step is unique to brewing, where you want to reduce your potential alcohol down to something like 5%. However, when you’re making whisky, you are trying to get the potential alcohol as high as possible, so this step is eliminated.

This step is again unique to home brewing, but may be done even if you are not using an all-grain recipe. Boiling is used to extract flavors from other ingredients, such as hops, remove proteins that cause chill haze, and a host of other reasons that do not apply to making whisky.

For simplicity, we are considering simply the mixing of ingredients as part of the fermentation step. Here is where we catch back up to the distilling process, and is the step where alcohol is actually created. Distillation is merely a method of separating compounds by boiling, and then condensing and collecting only those that we want, so we need to make the alcohol first. That is done through fermentation. Aside from all-grain whisky (or all-grain vodka, for that matter), fermentation will actually be the first step in most distilling recipes. So, for those of you who make beer or wine from kits, and will also make your distilled spirits without employing grain, this will be the first step in your process. For example, if you are planning to make rum, you will simply dilute molasses and ferment it, just as making beer from a kit requires you to dilute a can of malt extract and ferment it.

Fermentation is where most problems occur, regardless of whether you are brewing beer or distilling spirits. Fermentation, especially with beer or whisky, is where you have to be extra careful so that you do not end up with an infection, which will spoil your entire batch. To be safe, always sanitize all equipment and utensils used in mixing your ingredients, regardless of the final purpose. 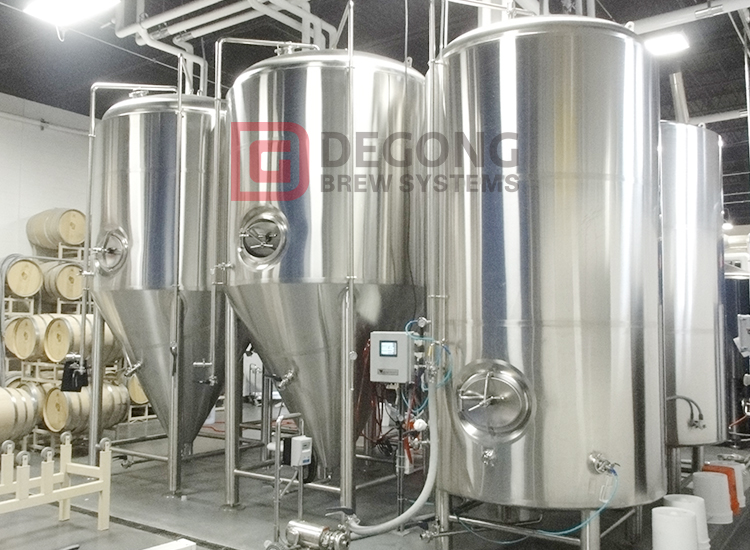 This is the final step in brewing beer. At this stage, fermentation is complete, your beer has partially cleared, and you will add a small amount of sugar. You then bottle the beer in appropriate bottles and store them for a week or two while the yeast ferments this bit of sugar, creating the fizz in your beer. In the case of wine, you will stabilize the wine to ensure that no more fermentation takes place, clear, filter, and bottle the wine. This step is not required when distilling spirits.

Instead of bottling your beer or wine you will now simply transfer the fermented liquid to your distiller. While optional, it is generally advised to clear the liquid prior to distilling in order to avoid scorching remaining solids or yeast. As noted before, distillation is really just the boiling and re-condensing of a liquid, and that liquid could be water, perfume, essential oils, or alcohol. There are two primary methods of distillation, each used for different purposes. Here is a simplified explanation of the two methods:

At first glance, this method is easier than reflux distillation, but it is more complicated and sensitive than reflux and requires more practice to get the best product. However, just like home brewing, hobbyists who want to be more involved in the process often opt for tank distillation. This method of distillation is most commonly used to flavor spirits such as whiskey, brandy, gin, and more. It requires you to control which parts of the distillate to collect or discard based on temperature, smell, taste... and experience. 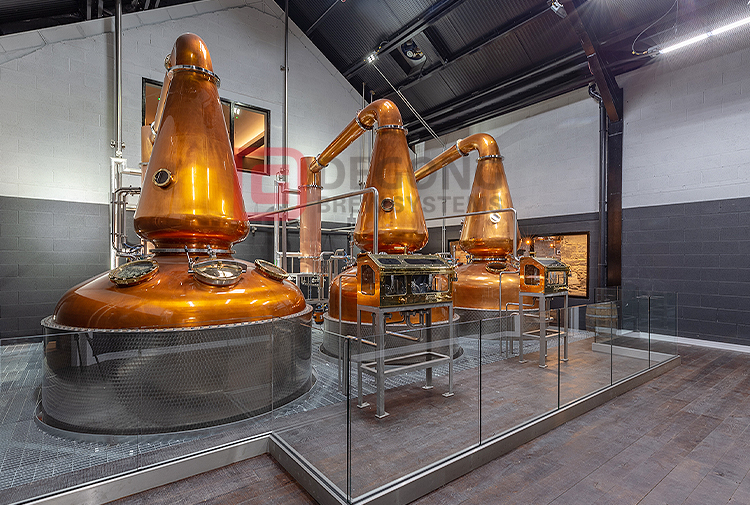 Reflux distillation is the most common method used in new stills. Like kit brewing, it's the easiest way to learn and get it right, and it'll keep you comfortable with the process. Reflux is most commonly used to distill neutral spirits (vodka), some rums, and gin in more advanced procedures and equipment. Since your goal is to collect a single ingredient - ethanol (alcohol), most of the guesswork has been eliminated. This will be diluted with water and can be used as is in vodka, or you can add flavorings to make anything under the sun. 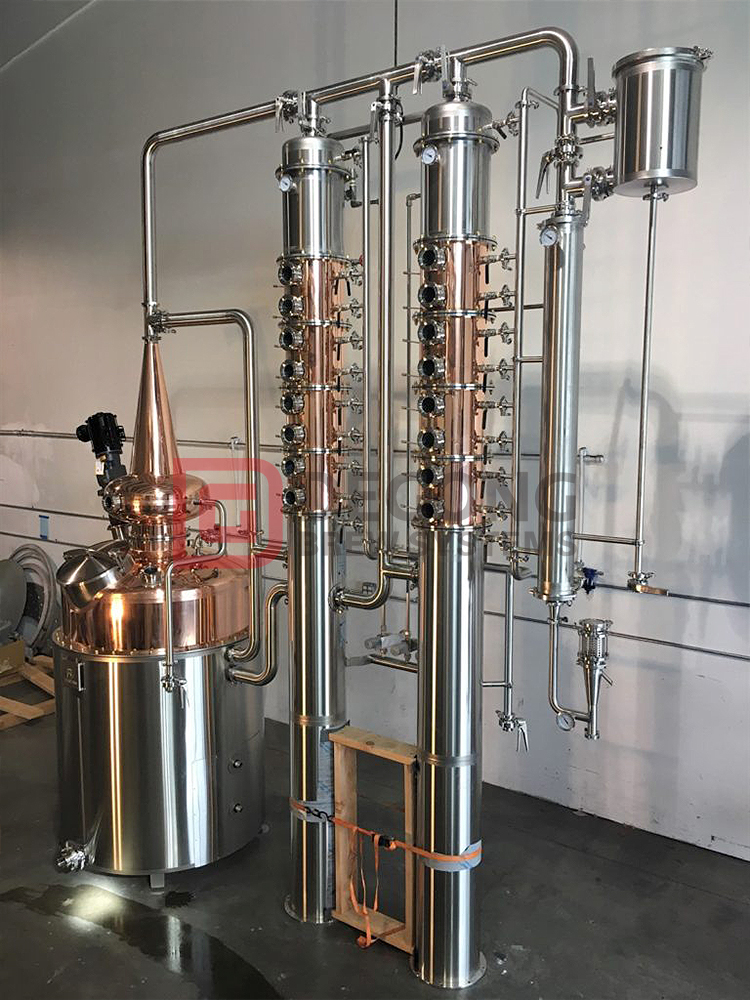 By aging we do not simply mean setting the product aside and waiting, but actually aging in oak barrels, or in containers with oak, other wood, fruit, etc., in order to alter the character of the finished product. This can take a varying amount of time, and is generally only done for certain types of distilled spirits, such as whisky, and for wine. It is not part of the home brewing process.

To review, a typical all-grain brewer will go through about 5 steps to craft their beer (mashing, lautering, boiling, fermenting, bottling), whereas an all-grain distiller will only go through 3 (mashing, fermenting, distilling). Kit brewers will go through only 2 (fermentation, bottling), which is the same number of steps needed for a similar distiller (fermentation, distillation). Given the overlap in the steps, I would think that most home brewers could easily learn how to distill. In the case of alcohol, you are working with a flammable product, so extra precautions must be employed, but most people that can safely work a stove or oven should be able to safely operate a distillation unit as well. There seems to be a stigma surrounding distilling, that it is either dangerous or very difficult to do, but it’s really not much more complicated that brewing beer.