English
High Quality Products Can Be Purchased.
You are here: Home » News » Is There Any Sugar-Free Beer?

Is There Any Sugar-Free Beer?

Does beer have sugar?

Since beer is primarily composed of grain, hops, yeast, and water, sugar is not one of its initial ingredients. However, in the process of malting grain (usually barley), the starches are converted into sugars. As a result, there is a small sugar content prior to the fermentation process.

Don’t worry, though, because the sugar does not stick around for long. When the fermentation process begins and yeast is introduced, it consumes the sugar, turning it into alcohol. As a result, sugar content goes down and alcohol level rises. By the end of the beer making process, most beers have below 1 gram of sugar left in the final product.

The amount of sugar varies from beer to beer based on a concept known as beer gravity.

What is beer gravity?

Gravity, within the context of beer, refers to the amount of solids being dissolved into water. In beer, these solids are the sugars that were produced by the malt. The gravity reading that is taken before the yeast is added is known as the original gravity. The more sugar a beer has at the point of original gravity, the more alcohol the final product will have.

To make this easier to understand for those of us that don’t brew beer regularly: beers with higher ABV (stouts, IPAs, etc.) have a higher original gravity than low ABV beers.

At the end of the brewing process, brewers will then take another gravity measurement known as final gravity. The difference between the original gravity and final gravity indicates the proportion of sugar that was fermented. 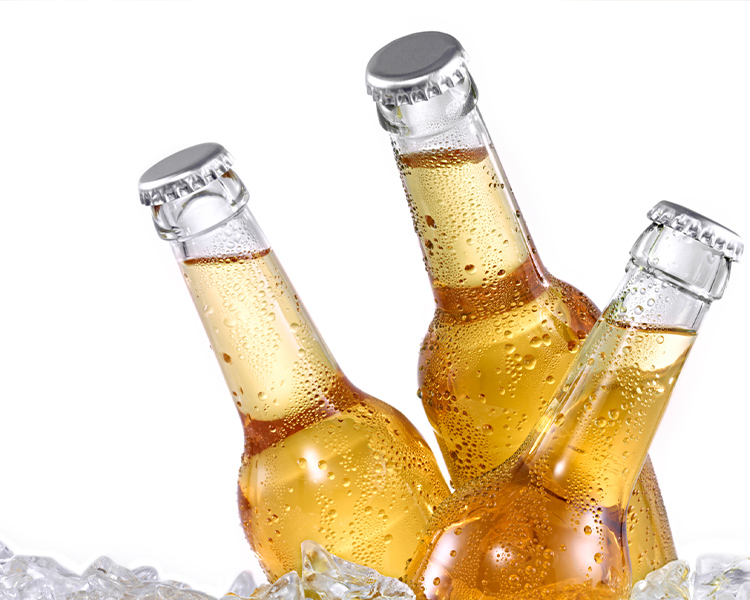 Is there sugar in light beer?

Since light beer is lower in calories than darker beer, it seems reasonable to assume that it has a lower sugar content, as well.

In reality, however, light beer has a slightly higher sugar content than regular beer. This is most likely due to the process of how it is made.

There are several ways to make light beer, but often an enzyme is used to transform carbohydrates into sugars, reducing calorie and alcohol levels in the beer. As a result, more sugar is left in the beer after the brewing process.

What about sugar in non-alcoholic beer?

Since alcohol content directly applies to the amount of sugar in beer, how much sugar is there in non-alcoholic beer?

Believe it or not, while non-alcoholic beer has lower calories on average than traditional beer, it actually has far more sugar. Since the process of fermentation converts sugar into alcohol, non-alcoholic beer requires additional steps while brewing.

Non-alcoholic brewers either restrict the alcohol formation, interrupt the fermentation process as a whole, or remove the alcohol after the fact. Naturally, once the alcohol is removed, sugar is added to improve the taste of the beer, resulting in a much more sugary concoction than a traditional brew.

Additionally, alcoholic beverage regulations do not require sugar content in beer to be listed on the packaging, so if you are worried about sugar content, keep an eye out for additives that may include sugar, like added flavors or corn syrup.

Does this mean beer is healthy?

If beer is low in sugar, and sugar is bad for us… Does that mean beer is good for us?

While I would love to say an emphatic yes, it’s obviously not that simple. There are multiple factors to consider when evaluating whether or not something is good for your health, and it is important that we all approach this conversation individually to determine what best suits us. At the end of the day, we encourage all people to do whatever they need to maintain a happy and healthy life.

So while I can’t sit here and tell you beer is a superfood due to its low sugar content, I know that for myself, drinking an ice cold beer with some friends after a long day can be a minute, yet important part of life. And if that means consuming a few extra calories, so be it. Cheers!