English
High Quality Products Can Be Purchased.
You are here: Home » News » How to Choose The Brewery Size?

How to Choose The Brewery Size?

Generally, you must brew 80,000 to 100,000 liters of beer per year, so that a single brew master can create a reasonable livelihood with his brewery. In addition to efficient production, turnover and earnings are dependent on whether you can sell or serve the beer yourself in your own premises. Distribution and resale take a large part of the profit.

How big a brewhouse do we need for a start?

You can start from scratch with a manual brewery with two vessels at 500 liters. However, a 500-liter brewery should be prepared for two brews per day. We recommend a minimum of 1,000 liters (10HL) to have future-proof platform. We also recommend three vessels (mash tun, lauter tun and whirlpool/boiler) to be more efficient by creating a better workflow and produce more beer in the process.

It is not necessarily more future-proof to start with a brewing plant with large batch sizes (20-30-40HL) – unless you must brew large quantities of the same beer. Most microbreweries benefits from brewing many different kinds of craft beers. Should one or two of the beers become particularly popular, you can instead buy larger fermenters and brew several times to fill the larger fermenter.

Brewing plants of 10HL and above are all prepared to brew half batches.

We also recommend a hot water tank (HLT, Hot Liquid Tank) to reuse the hot water from the cooling process. A HLT will also supply hot water for sparging to utilize all the sugars in the lautering process. The hot water is used to quickly start the next brew when you brew two batches right after each other. A HLT must typically be twice as large as the brewery itself, i.e., 20HL (2,000 litres) HLT for a 10HL (1,000 litres) brewing system. 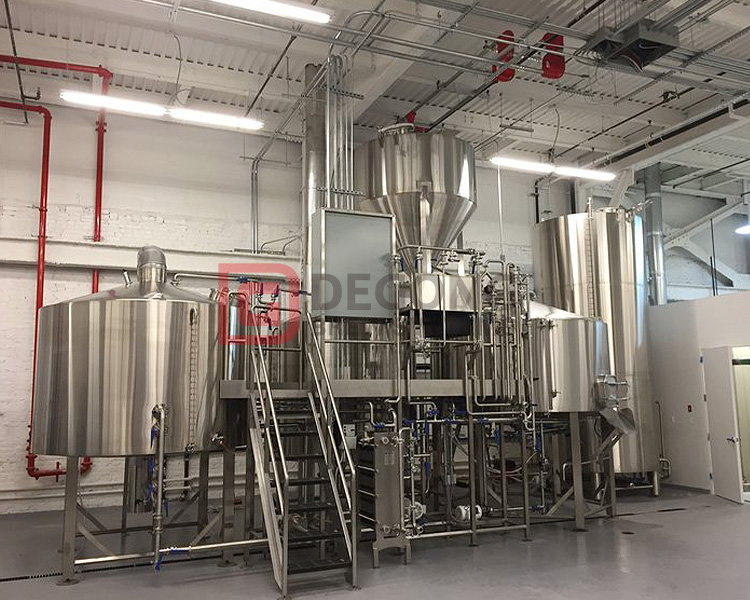 Which brewing principle should we choose?

There are mainly two different types and methods of brewing in a two-vessel brewery.

One is a combined mash tun and lauter tun – plus a kettle/whirlpool tun. That method only allows you to mash in one step and possibly make a decoction where you take the first herb, heat it up and return it to the lauter tun.

The second type and method are combined mash tun, kettle and whirlpool tank in one vessel. The second vessel is the lauter tun. It allows you to mash in several steps.

A three-vessel system consists of mash tun, lauter tun and kettle/whirlpool tun. It is more efficient and allows you to brew several times in a day if you combine the brewery with a hot water tank.

In a four-vessel brewery, the boiling vessel and the whirlpool tank are separate tanks. This results in even more efficient production – more brews per day.

We typically recommend breweries with smaller batch sizes and more efficient setups, so it is possible to make many different types of beer in small quantities and at the same time scale up by brewing several batches one after the other efficiently and with the least possible effort. Our breweries can be prepared to brew half batches by agreement – and at no additional cost.