English
High Quality Products Can Be Purchased.
You are here: Home » News » How Long is the Beer Fermentation Process?

How Long is the Beer Fermentation Process?

The time a beer takes to ferment will definitely vary depending on many factors: whether you’re brewing an ale or a lager, what style you’re brewing, the gravity of the brew, and the yeast you’ll be using. The recipe you’re using may have specific instructions on the time you should leave the beer in the primary and in the secondary. Here we’ll provide you with some general guidelines. As always, the final decision will be up to you, the brewer.

A note about ales vs. lagers

If you’re new to the hobby, you may not know the differences between brewing ales and lagers. The information contained here will assume that you know what these differences are and what techniques are involved.

The amount of time a beer needs to ferment depends on the style and type of beer being made. Ales and lagers will ferment at different rates, as will darker beers and beers with higher alcohol content. Keep in mind that these are just suggestions. You may find that you like your beer with a shorter or longer fermentation time. New brewers are typically excited to try their beer, which is why our ale kit directions all say to ferment the beer one week in the primary and one week in the secondary (or two weeks if only using single fermentation). The directions also suggest 4-6 weeks of bottle conditioning before drinking.

Here are some general fermentaion time suggestions by style.

For styles such as American Amber Ale or German Altbier, we recommend 1 week in the primary and 2-3 weeks in the secondary. As a beer gets darker in color it becomes more important to let the beer sit longer in the fermenter. The reason is due to the darker grains. The more a grain gets roasted, the more chances there are for off-flavors. This little extra time will make a big difference on how the beer tastes in the end. For an amber or red ale, we would recommend one week in primary, and 2-3 weeks in secondary. Even if the beer has cleared, don’t worry, the carboy is an excellent place to store your beer until the flavors have blended better.

Dark styles of beer will benefit the most from a long fermentation time. Dark ales tend to contain some very heavily roasted grains. If not allowed to age properly, you may notice a slight “burnt” flavor in a dark ale. The longer you leave a dark ale in the secondary, the more of this sediment will completely settle to the bottom of your fermenter and not adversely affect the flavor of your beer. Again, you want one week in primary, and then 3-4 weeks in secondary.

Lagers ferment differently than ales, and sometimes require special equipment. The main difference is that lagers ferment a good deal colder than ales do. While ales are quite comfortable bubbling away at room temperature, lagers are at home fermenting in the 45º-55ºF range. The colder temperature greatly slows the fermentation process, so extra time is required both in the primary for the beer to fully ferment, and in the secondary for maximum clarity. For lighter lagers, we suggest 1-2 months in the primary, and 1-2 months in the secondary. Most of the brewers will keep a light lager in the secondary for at least 2 months.

Amber lagers take just a little bit longer to ferment than light lagers. It takes just slightly longer for the flavors to blend and mellow. It’s not unusual for an amber lager to take 2 months to ferment out in the primary, then spend an additional 3-4 months in the secondary. Traditionally, this style is brewed in May and tapped (or bottled) in late September or early October, or roughly six months. Some extra time in the secondary will go a long way toward improving the quality of an amber lager.

Most (but not all) dark lagers are higher in alcohol. of malt extract. By comparison, some of the dark lagers contain upwards of 12 lbs! This will translate to a longer fermentation time, due to the amount of alcohol being produced. Alcohol itself has a very bitter taste, and it takes some time to mellow out. Extra aging time will really help these beers out. For styles such as Bavarian Doppelbock, Bohemian Dark Lager or Schwarzwald Black Lager, our recommendation is 2-3 months in primary, and 9 months in secondary. In some cases, you might even want to keep the beer in secondary longer. Don’t worry; the beer will be just fine in the carboy for that period of time. Just make sure to check the airlock from time to time to make sure there is still water in it. 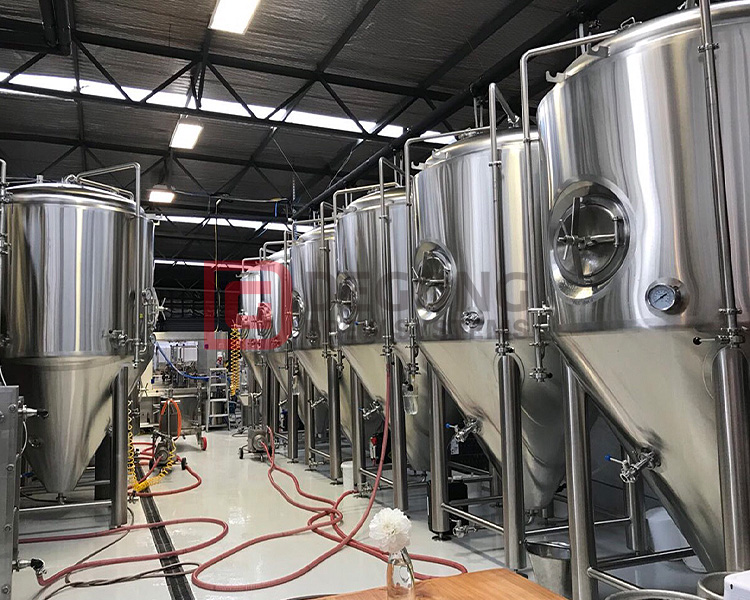