English
High Quality Products Can Be Purchased.
You are here: Home » News » Get the perfect beer foam

Get the perfect beer foam

High protein content of malt and dextrin is conducive to enhance the durability of the wine head foam, but also make the wine body richer.

However, a large amount of protein and dextrin will react with tannins (polyphenols) and affect the clarity of beer.

Since the maintenance of the wine head foam is closely related to the protein content in the wort, the process of destroying these proteins will have a certain impact on the foam stability.

The typical protein resting temperature is 49-54°C, which will reduce the protein that causes turbidity in cold storage, but it also decomposes the protein that is conducive to the maintenance of wine head foam. Therefore, for malt with good solubility, it is not necessary to carry out excessive protein stop. It is only recommended to carry out protein stop when you use more than 25% of un-sprouted malt (barley flakes, wheat flakes, rye flakes, oatmeal).

For malt with good solubility (which has gone through the complete malting process), use the temperature range of 68-71℃ to produce sugar, avoid protein inactivity to obtain a richer body and improve the foam retention of the wine head.

These bitter substances are also helpful to help your beer get "foam lace": when the wine is poured out, the foam is moist and fluffy. With drinking, after a few minutes, the foam will adhere to the glass wall and form a white lace pattern.

The longer the fluffy foam is maintained, the better the lace left on the wall of the cup. In general, heavy-hop beer heads have richer and longer-lasting bubbles, but you need to be aware of the bitterness of beer.

Many wineries will fill the beer with a mixture of nitrogen and carbon dioxide, so that the beer has a richer, finer, and lasting foam.

In addition to changing the foam, the mixing of nitrogen will give the beer a creamy and mellow taste and weaken the bitterness of the beer.

The influence of the wine glass on a beer can be described as the "finishing finishing touch". The proper wine glass enhances not only the foam on the head, but also the aroma and overall flavor experience of the beer.

In general, a slender, narrow-mouthed cup reduces the area of foamed beer exposed to the air and restricts the escape of carbon dioxide, which is more conducive to the durability of foam; on the contrary, a large mouth allows carbon dioxide to escape more fast. 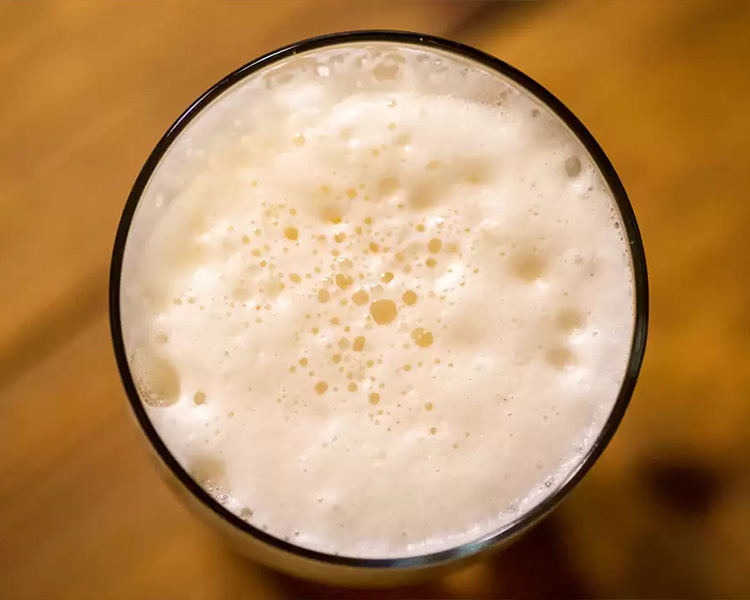 Some wine glasses (such as Caris wine glasses) will also be etched on the bottom of the cup to form small dents to provide nucleation points for bubbles, so that the beer in the cup can continue to produce bubbles.

*Note: Be sure to keep the wine glass clean and oil-free, do not insert small fresh lemon slices into the glass, these will greatly destroy the wine head foam.

Household soaps, including dish soap, and laundry soap residues can cause a devastating blow to the foam on the wine head. So avoid using them as much as possible to clean your brewing equipment and wine glasses.

Because the oily substance can greatly destroy the beer foam, some wineries will also add PGA to the beer to improve the stability of the head foam.

Foam is essentially formed by a large number of small bubbles gathered in a small amount of liquid. PGA will gather on the surface of the bubbles to form a protective layer to prevent the penetration of grease and destroy the bubbles.