English
High Quality Products Can Be Purchased.
You are here: Home » News » From Home Brewing to Commercial Brewing

From Home Brewing to Commercial Brewing

It seems that every home winemaker dreams of turning his hobby into a career. As a seasoned home brewer, it’s hard to imagine going straight into the business world, look at the craft breweries in your area and you’ll probably see plenty of examples of leaping, but it’s not an easy thing to do. Professional brewers put a lot of effort into getting this position, and despite being familiar with some tools and ingredients, and possibly having predictable regular recipes, practical and theoretical brewing knowledge is also heavily weighted, while opening your craft brewery is even more of a challenge. It’s more difficult. In the face of a large brewery, there may not be many risk measures yet. Also, it takes a strong will, a lot of effort, and professional skills to open a craft brewery.

What Is Commercial Brewing?

Commercial brewing refers to the process of brewing beer on a large scale, in large quantities. A commercial brewery is defined in the beer industry as a brewery that brews more than 6 million barrels of beer per year. So, commercial breweries need larger brewery equipment, better brewing process control, and faster production efficiency. Since the production of beer requires large-scale brewing, cost-effectiveness and efficiency are important, so it is almost impossible to ensure the quality of each beer. So they need such mass-produced ingredients like dextrose and corn syrup to simplify production, and because they’re watered down, the beer is generally milder in taste.

What Is A Craft Brewery?

One condition that a craft brewery must meet is that the brewery must be independently owned. Plus, the smaller brewing capacity of craft breweries allows them to use more innovative brewing processes and brew non-traditional ingredients in new and creative ways that large commercial breweries simply cannot.

What Is Home Brewing?

Homebrewing is the small-scale brewing of beer, mead, and beer by individuals for non-commercial purposes. These are generally hobbies, and supplies such as kits and fermenters are purchased at local specialty stores or online. Alcohol has been brewed in the world for thousands of years before commercial production, although its legality varies to local regulations. The hobbies of home brewing and home distilling are closely related, and while they both produce alcohol for personal consumption, home distilling is usually more strictly regulated by hand. Brewing beer also has the freedom to adjust recipes to your liking, making drinks that aren’t available on the open market or that have fewer calories, less alcohol, or conversely more drinks. Some even join homebrew clubs and go to competitions to express their love for brewing beer, mead, or cider. 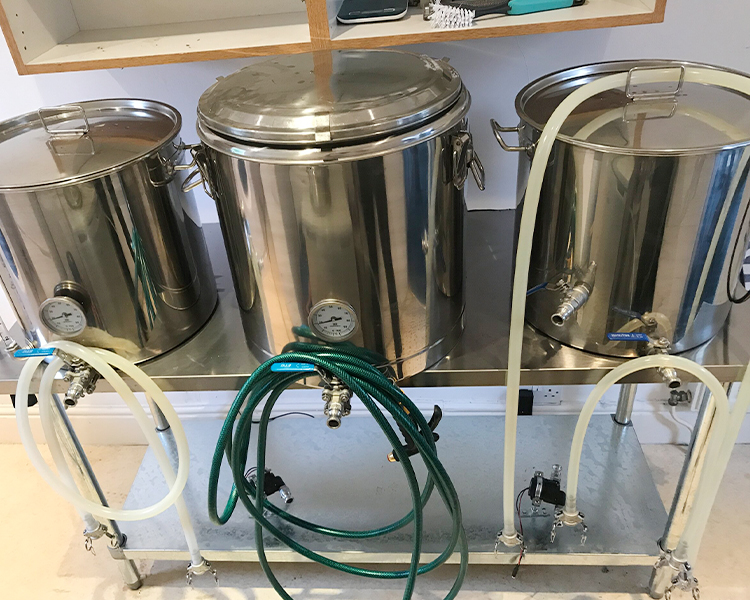 What Is The Difference Between Home Brewing And Commercial Brewing?

For thousands of years, people have enjoyed the fermenting magic of beer. While there are many similarities between home brewing and commercial brewing, there are some differences.

Generally speaking, for a brewery to thrive, it must be proficient in whole grain brewing. While home brewing can be brewed using the extract, it is a very simple process. On a commercial level, extract costs about $2.50 per pound and barley malt costs about $0.50, so for commercial breweries doing large-scale brewing, brewing with malt is more cost-effective. While there may be some small extraction breweries, there are far too few of them.

Mastering mashing and producing whole-grain beer is a must for commercial breweries. If you want to be called a brewer in a pub or microbrewery, then you need to master the art.

For most people who do home brewing, home brewing is a spring and fall adventure, with the occasional winter and summer brewing in a stable temperature environment. Ambient temperatures for home brewing need to be in the 50-60°F (10-18°C) range for successful fermentation within safe parameters. Without a garage refrigerator or fermentation cabinet, the fermentation process is vulnerable to weather—too hot or too cold.

Double-layer, insulated, glycol-jacketed stainless steel fermenters with temperature-controlled coolers are used in breweries. So the brewery can cool the beer at will. The ethylene glycol jacket is the inner wall component of propylene glycol that is continuously circulated, using a liquid coolant with a very low freezing point. Glycol turns on if the beer temperature rises above the set fermentation temperature, and turns off when the beer temperature is cooled to between the set fermentation temperature. So this is a tightly controlled temperature environment. In summer, the glycol compressors work harder, and in winter, insulation keeps the beer from the cold.

Traditional homebrew is only made in small batches and doesn’t sell anything. Homebrew has always been an expression of experimentation and creativity, tiny tweaks made by homebrewers in a controlled environment, pouring from one pot to another, and even yeast added in its way, the taste buds feel relative to the original recipe After the comfort and pleasure, try the process of finishing the brew in the brew. In all commercial breweries, the wort or beer is piped and pumped to complete the steps in the equipment and then put into commercial-scale fermenters. Yeast is added in different ways, and large breweries expand their yeast training to save costs. As the production scale increases, commercial brewers will also must many types of machines to operate.

During the brewing process, there is no such thing as too clean. The place where beer is stored must be clean, not only free of dirt but also hygienic and bacteria-free, so you need to use some detergent when cleaning beer cans. Bleach, B-Brite, or Star San cleaners can be used in home brewing to control bacteria. Also, if your brewing equipment becomes worn or scratched after you boil it at home, throw it away and buy a new one. With one exception, you can use an iodine solution to sterilize the jar, but it will discolor the plastic. Discolored plastic can hide dirt, dry beer residue, stickiness, and maybe it’s not the best choice for home brewing hygiene.

Breweries make profits by selling beer, so they need to sell beer to consumers. For the brewery to grow, you must clean the brewery equipment before you can start brewing. Because brewery equipment is bulky and difficult to clean, CIP cleaning systems are used to clean the equipment. The solution circulating in a CIP system can have many harsh, caustic chemicals in it, but the brewery cleans these up so there is little risk.

Brewing requires more than just science, the ability to read brewing recipes and abide by the rules, but an innate connection to the heart of the process. Hence the need to learn and understand everything about brewing from chemical, environmental and cultural aspects.

The most unique and complex beers come from Belgium, the best from Germany (and the Czech Republic), and the best ales from the UK. There’s a reason for this it’s their culture, their lifeblood, and their reason for being.

Business acumen, science, and market awareness are essential in a commercial brewery. If one is not motivated to find answers to life, the universe, and all things, and beer is the vehicle for that journey, then perhaps commercial brewing may not be the ideal journey for you. But you can happily brew your favorite beer at home brewing as you like.

As a seasoned home brewer, it’s easy to imagine jumping right into commercial brewing. All the beers you’ve brewed before taught you how to make great beers, you’re familiar with brewing tools and ingredients, and you probably have some predictable regular brew recipes. The practical and theoretical brewing knowledge base you have accumulated will help you, but you may not be ready for many pitfalls, such as planning a large brewery, understanding regulations, and integrating business models.

As it solves all problems without a network, you can develop by paying for training, gaining work experience in the industry, or a combination of the two. There are now many brewer’s associations or technical colleges that offer brewing courses and teach commercial brewing. Many public schools also offer classes and programs. This path may seem expensive and time-consuming, but it can be a differentiator for professional experience or convincing investors to back your business.

Working at other breweries also takes time and effort, but the investment pays off. You can start with the easiest jobs, hauling grain or cleaning kegs, etc. But, if you are careful enough, you can learn a lot about what it takes to run a business. Best of all, it’s a relatively low risk this way because it’s not your money being spent.

If owning a brewery is your dream, consider this the key to a reality check. Once you understand the risks and hard work of being an entrepreneur, you may decide whether you want to be a professional winemaker working for someone else. Why scale back your ambitions? Because the core of a successful brewery in the business, and while there will be fun and creative processes, as a brewery owner, you may be more concerned about raising capital and managing the business than focusing on developing new beer recipes.

For a commercial brewery, premium beer is just the best. You need to figure out your market, decide on packaging and distribution alternatives, develop product consistency and create a growth plan. What makes your brewery stand out? It’s not just about carving out a style niche, you also need to consider the public perception of unique graphic design, locale, taster character, personality, etc. While juggling all of this, you’ll also have to learn how to hire and manage reliable employees, coordinate supply and production, and possibly other things as well. These are not easy things to achieve.