English
High Quality Products Can Be Purchased.
You are here: Home » News » Factors to Consider when High-Gravity Brewing

Factors to Consider when High-Gravity Brewing

The principle of high-gravity brewing and dilution is no secret to professional brewers, but for home brewers attempting this method a few key points need to be kept in mind before starting.

The dilution point: Extract brewers are familiar with dilution; virtually every extract brewer boils a concentrated wort and transfers that wort to a fermentor containing several liters of water to accelerate the cooling of the wort. More water is added later to make up the volume to the final batch size. In this article, however, I propose adding water to the finished beer, after fermentation. Only with this method of dilution can you push production capacity beyond the nominal capacity of your fermentor.

Style limitations: High-gravity brewing is only practical when you are producing average- to medium-strength beers. Strong beers depend on all the gravity the brewer can get from the malt, and diluting these beers would be counterproductive. You can also only put so much grain in your mash tun, so you would have to produce a smaller batch with primarily the first runnings from lautering. Furthermore, limits to alcohol tolerance in brewing yeasts mean that it is practically impossible to brew extremely high-gravity beers (say, >12% alcohol [v/v]) for dilution to target high-alcohol finished beers. I therefore propose that high-gravity brewing with dilution applies to the production of finished beers with target alcohol contents of up to 8% (v/v).

Dilution limitations: If you’ve ever been on a large commercial brewery tour, you may have tasted samples of their undiluted beer. You were probably pleasantly surprised at the flavor and character. Make no doubt about it — professional brewers can make good beer! They just seem to get carried away with their water additions. Beer can be diluted only so much before it begins to taste watered down.

The general rule of thumb in the brewing industry is that beer can be diluted up to 30–40%. If we consider this range the practical limit (and an extreme that most of us would wish to avoid), it is easy to imagine that adding less water will have very little effect on the final product. With the proper recipe adjustments, the addition of 10% water to your beer will make very little difference to most people’s perception of the beer, yet it can affect your level of production significantly. If you were to use a fairly conservative 20% dilution, you could increase a 5-gallon batch to 6 gallons. That means that you can produce as much beer in five batches as in your last six.

Other considerations: High-gravity brewing requires higher quantities of every ingredient to match the characteristics of a beer brewed normally — more malt, more hops, and more yeast. High-gravity brewing also creates new issues for the brewer. Studies have shown that high-gravity beers, whether diluted or not, have poor head retention compared with beers of normal gravity. It has also been observed that high-gravity environments decrease hop utilization and cause some yeast strains to underperform. Adjustments may also need to be made for color. Fortunately, brewers can address these problems through recipe adjustments. The water you use for the dilution is also very important, especially since it’s being added after fermentation.

The water used for diluting your beer must be sterile and free from other unwanted elements, including chlorine, oxygen, and possibly minerals. You can prepare your own water at home by boiling and cooling it in advance. Any oxygen in the water will oxidize compounds in the finished beer, shortening shelf life and leading to off-flavors. Boiling effectively deaerates the water. If you boil your water, try to keep it cool afterwards so that it takes up less air (oxygen) from its surroundings. Avoid adding air to the water (and beer) by racking it carefully into the beer. This issue is less of a concern in the case of bottle-conditioned or kegged beer than in beer in which the yeast has been removed because the yeast act as natural oxygen scavengers. Nonetheless, the presence of air in beer should be avoided almost as scrupulously as the introduction of microbial contaminants.

In principle, carbonated water is the best type of water to use for diluting beer because it is oxygen-free and will not dilute your beer’s carbonation. Some contain sweeteners, salts, or other undesirable ingredients. If the beer is fermented again in the bottle or in a keg to achieve carbonation, carbonated water is not necessary.

Bottled distilled water is always a good source and is what I use. Most bottled brands of drinking water have little if any microbial contaminants in them and should be suitable for dilution. I always avoid mineral waters because of their mineral content and also because some brands are aerated. Pure drinking water that comes from a machine should not be used because in addition to the mineral content the quality control is much more variable (you can’t trust the water around the time a new filter is due). 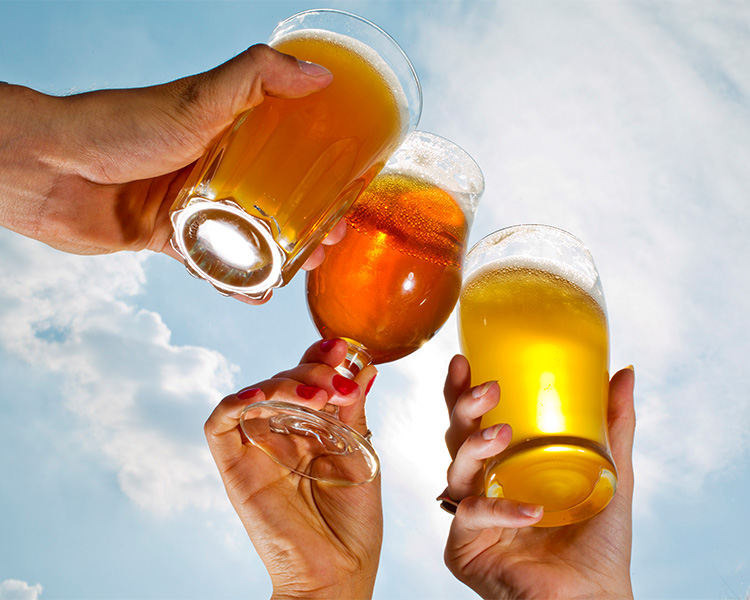