English
High Quality Products Can Be Purchased.
You are here: Home » News » Boiling

Homebrewers don’t usually give a lot of thought to the boil. Other than adding hops from time to time there doesn’t really appear to be much happening. But the boil is essential to a good beer for a number of reasons. Besides accommodating the hops schedule the boil also sterilizes the wort, denatures the enzymes that were active in the mash, and stabilizes the proteins. Knowing what happens in the boil and how to manage it will give you more control over your brewing process. Better control means more consistent brews and a greater ability to experiment.

If you’re brewing from a recipe, it’s likely that the hops schedule was included. Most schedules require you to add some hops near the beginning of the boil, some more somewhere in the middle and the rest during the last five minutes. These schedules are based on that fact that as hops break down during the boil, the most delicate aspects of them – color and flavor – evaporate or precipitate away. Conversely, the longer they are in the boil, the more of their bittering qualities are released and absorbed into the wort.

So, how bitter should your beer be and how do you determine bitterness? The bitterness of a beer is measured with International Bittering Units or IBU.

Of course, some beers will require more bittering and since this is your beer, the amount of bittering should be based on your taste. The approximate IBU of your final beer can be determined by dividing (Gallons X 1.34) by (Oz. of hops X % alpha acid X minutes in boil/2). This formula only works up to 60 minutes; after that use 30 instead of "minutes in boil/2." Most hops come with the alpha acid printed on the packaging. 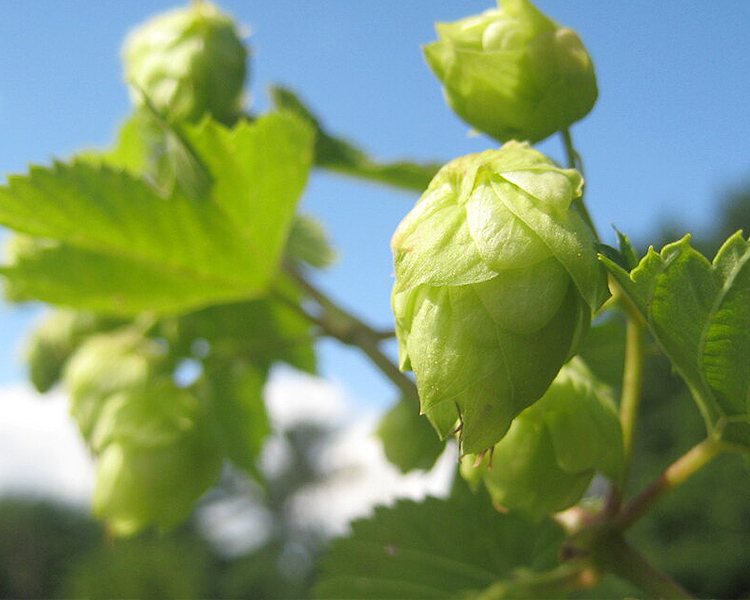 If you’re brewing an extract beer you face a unique challenge. Extract beers can be boiled with only a fraction of the water but this can lead to scorching of the sugars. Scorched sugars are unfermentable so the beer will be sweeter and have less alcohol than intended after fermentation. It will also produce a much darker beer. Boiling with all of the water is the best way to prevent this but with some care, you can create successful beers with only three or four gallons in the boil for a five-gallon batch.

To avoid scorching, bring your water to a boil first. Then remove the kettle from the heat and stir in the extract syrup. Keep stirring until it is fully dissolved. Return the kettle to the heat and maintain as vigorous a boil as you can so no sugars will settle to the bottom of the pot where they can scorch. 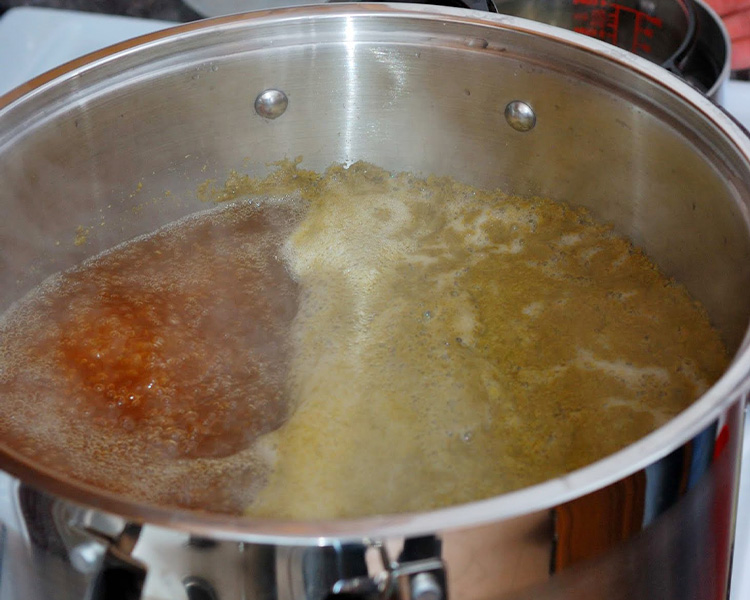 Word that comes straight from the mash contains, among other things, a lot of different proteins. One of the most important functions of the boil is to remove some of these proteins which can cause side effects ranging from the chill haze to off-flavors making the beer undrinkable. It is important to boil any beer for at least one hour and to maintain a rolling boil for that whole time to completely stabilize the brew. Of course, you would never want to remove all of the proteins from a beer as they are responsible for some of its most important aspects including color and mouthfeel.

Hops play an important role in the process of removing these harmful proteins. The malt proteins will stick to the polyphenols from the hops. A vigorous boil assures that these polyphenols will actively move about in the kettle and gather as many of the proteins as possible.

As these unstable proteins gather or flocculate, they form little clouds in the brew. These clouds will fall under their own weight or precipitate to the bottom of the kettle at the end of the boil. This is known as the hot break. This is the most important part of the boil as it removes the nastiest of the potentially harmful proteins – those that can cause off-flavors and instability. You can judge when the hot break occurs by taking a sample of wort. You will see the cloud or flocks of protein suspended in the sample. Once removed from the agitation of the boil, these clouds will settle to the bottom of the container. When this happens you will know that you’ve achieved the hot break.

The ph level of the soil is important to create an efficient break. Levels of 5.0 - 5.5 should be maintained to fully precipitate the bad proteins out of the wort. You can use acid or calcium carbonate to regulate the ph level. The ph will drop during the boil but only .2 or .3 so once you’ve hit the target range you really don’t need to monitor it closely unless you accidentally drop an orange in your brew kettle.

When the boil is over create a whirlpool with a long, clean spoon. This will draw the sediment, called trub, into the center of your kettle. You can then drain or siphon the wort from the side of the kettle leaving the trub behind. Try not to splash the wort too much. Introducing oxygen to hot wort can create unwanted flavor and color changes in the final product. The wort can be further filtered through a 2 inch bed of loose hop flowers in a strainer or hop back. While this will introduce some fresh hop qualities to the final beer, our purpose here is to produce clearer wort. This should be done before the wort cools to below 170F to prevent infection. You might want to put the first running back through until the hops have settled for the best filtration.

Now it is time to chill the wort. Wort chillers are simple heat exchange devices that quickly cool wort by placing it next to cold water, usually through some sort of copper tubing.

An immersion chiller is nothing more than a coil of copper tubing that is dropped into the hot wort. Cold water is run through the tubing quickly cooling the wort. A counter-flow chiller is a tube within a tube. The wort flows through the inner tube in one direction while the cool water runs through the outer tube in the other direction. When the wort emerges from the other end it has been cooled to the temperature of the water.

There is also a cold break that removes the proteins that can cause chill haze. Most homebrewers don’t need to worry about this. Chill haze doesn’t negatively affect the beer and creating a cold break requires equipment that many homebrewers don’t have. However if you are brewing competitively, want an especially clear pale ale, or regularly brew lagers you probably want to produce a cold break.

The cold break essentially happens in the same way as the hot break. The wort is cooled to the point where dissolved proteins are forced to precipitate and fall out. Typically you won’t need to cool below 38F though some commercial brewers take it so far down the ice begins to form. The resulting beer is especially clear because doing so precipitates so much out of the wort. It is also less flavorful for the same reason. After the cold break the wort should be racked off of the trub into the primary fermentation container. It is important that this cooling period happen as quickly and cleanly as possible because this is the time that your wort is most susceptible to infection. 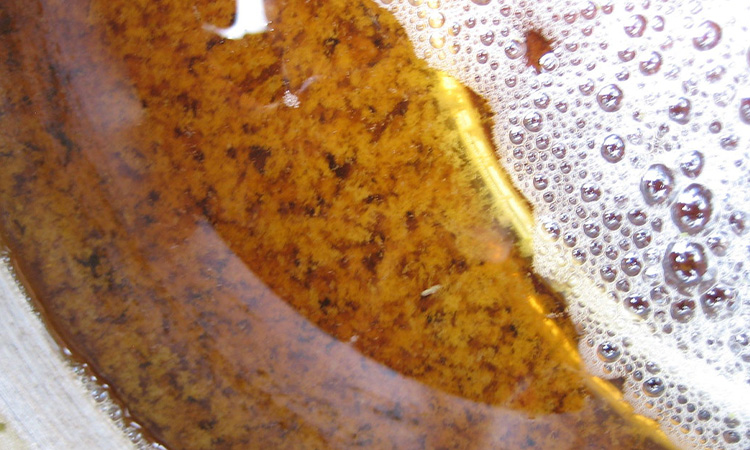 Creating a cold break is indeed a troublesome process even for the most sophisticated homebrewer. Fining agents provide a simple way around it. Working in much the same way as the hop polyphenols described above, fining agents are added towards the end of the boil or later in the fermentation tank.

Whether you use the cold break or skip it, once the wort is at the optimum temperature for your yeast – the range usually appears on the packaging – you are almost ready to pitch it. But first the wort must be oxygenated. The boil left it in an oxygen starved state and yeast requires oxygen to survive. This isn’t a particularly complicated process, you simply need to introduce as much of the wort to air as possible.

Vigorously shaking the carboy and agitating the wort all the while keeping the top covered with a sterile hand should do the job. There are also pumps available that will pump air into the wort for you. Once you’re satisfied that the wort is properly oxygenated, it’s time to pitch your yeast or starter into the wort and let the fermentation begin.