Following wort separation and extraction of the carbohydrates, proteins, and yeast nutrients from the mash, the clear wort must be conditioned by boiling in the kettle. The purpose of wort boiling is to stabilize the wort and extract the desirable components from the hops. The principal biochemical changes that occur during wort boiling are as follows:

Although the wort separation and sparging processes are normally conducted at elevated temperatures (76-80°C), wort entering the kettle contains numerous microorganisms-yeast, molds, and bacteria-which can result in off-flavors and numerous other problems.

Boiling fixes the carbohydrate composition of the wort by inactivating residual enzymes that are responsible for carbohydrate and protein degradation and that may have survived mash-off or sparging.

During the boiling process, it is necessary to decrease the level of high molecular weight nitrogen found in the malt. Protein precipitation occurs as the wort loses its turbidity during boiling, and material breaks out of suspension and precipitates as proteins coagulate.

During boiling, the color of the wort becomes darker. This is brought about by the formation of pigments (melanoidins), the oxidation of polyphenols, and the caramelization of sugars.

The production of melanoidins-the Maillard reaction-occurs when reducing sugars from carbohydrates react with amino acids that are derived from the proteins during mashing.

The oxidation of polyphenols is another source of color formation. Polyphenols are sometimes referred to as "tannins" and may be derived from malt husks and hops.

Caramelization is a chemical process that affects sugars subjected to temperatures of 200°C or greater.

The major flavor contribution of hops in beer is bitterness from iso-alpha acids. During the boil, the insoluble alpha acid extracted from hops is converted to a more soluble iso-alpha acid.

Boiling of wort drives off volatile wort compounds, including dimethyl sulfide, aldehydes, and hydrocarbon components of the hop oils. The principal malt derived volatile lost during boiling is dimethyl sulfide or DMS which is rapidly lost through evaporation.

The wort must be concentrated by evaporation since the water used in mashing and sparging has produced wort lower in specific gravity than the target gravity.

As previously mentioned, the pH of the wort starts to decrease during mashing and continues to fall during wort boiling to reach a final pH of between 5.2 and 5.3. 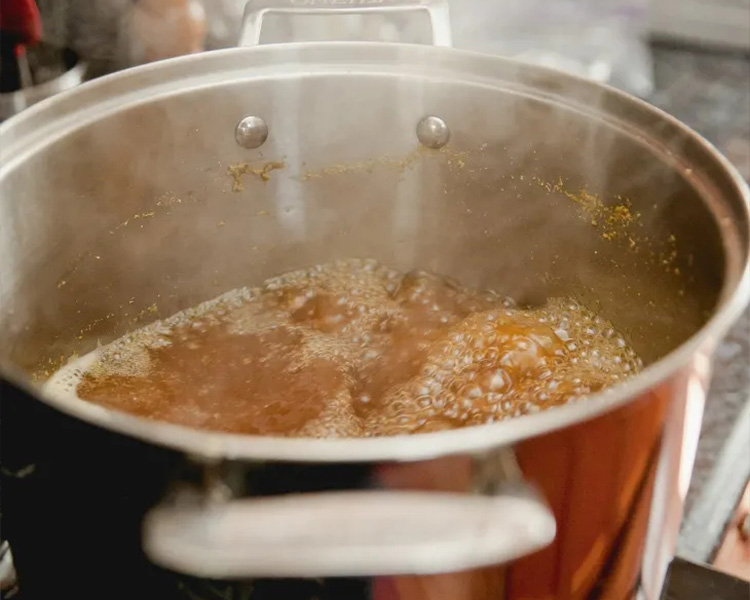