English
High Quality Products Can Be Purchased.
You are here: Home » News » About Distilling Vodka

Russians and Poles will forever argue over who drank it first – and we will leave that arguement between them. Let it suffice to agree that this “white drink” originated somewhere in northern/eastern Europe around 1400AD and has, since then, spread its popularity across the globe. Vodka, or more literally, “water” (derived from voda), was most conveniently discovered in the colder regions of Europe and Asia when burgeoning distillers realized that their fermented wine became more potent after freezing through the cold winter temperatures. With advanced distilling techniques brought over from the west in the 1400s and 1500s, the Slavic peoples were able to refine their vodka and create top-quality alcoholic drinks that would soon become the trademarks of their countries.

Vodka did not become popular in the US until the 1940s. It was introduced into the American market in the late 1800s and early 1900s when importers realized they could target Eastern European immigrants with a nostalgic drink. Also, many Russian distillers, who lost their livelihood when the Bolsheviks confiscated all private distilleries after the Revolution of 1919, escaped to the US and brought with them their trade vodka secrets and dreams to start again. Still, vodka did not find a prominent place on the stage of alcohol for Americans. Once alcohol rejoined the living with the repeal of the Prohibition Act in 1933, the Russian Vladimir Smirnov (changed to Smirnoff) sold the Smirnoff company to Rudolph Kunnett who in 1939 sold it to the Hublein Company. Several attempts were made at breaking vodka into the American market, but it was not successful until the company began to market it as a cocktail base. This proved to be a great strategy and vodka was on its way to make its mark on the American drinking culture. With its great versatility as a drink mixer it became a favorite at parties and social gatherings. Today you can see many vodka varieties at the liquor stores, among them the most popular being Smirnoff and Absolut. 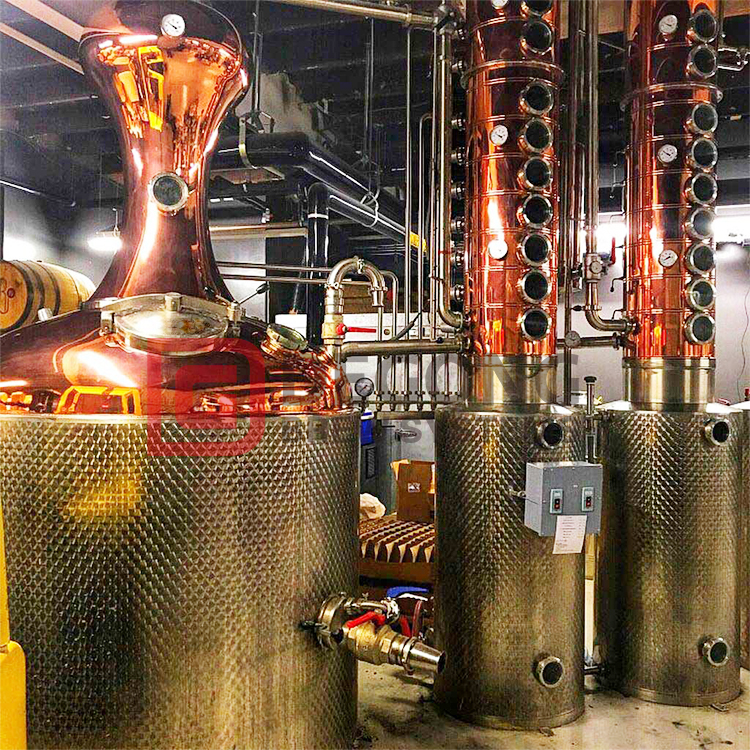 How to make vodka

Vodka is an easy spirit to make. The end result simply comes down to a matter of taste and government regulations. In the US, vodka is classified as “neutral spirits, so distilled, or so treated after distillation with charcoal or other materials, as to be without distinctive character, aroma, taste, or color” by the Bureau of Alcohol, Tobacco and Firearms. This makes vodka distillation simple in the US because the only variety allowed for is alcohol content. Those who prefer a lower proof (which inherently includes more congeners and, therefore, slightly more flavor) do not need a tall column to achieve this result and could, possibly, get away with a potstill (although it is far less efficient). Those who prefer a high proof vodka, as is more common, will find that reflux stills with a higher number of bubble plates will accommodate this goal very well. The mash needs only run once through the reflux still and the number of bubble plates the vapors pass through will determine the final proof of the product.

There are many ways to produce vodka. The most popular vodka is from grains, like rye, wheat and corn. Other options include using potatoes, beets or molasses. If using rye or wheat, first the grain must be mixed into water and then heated to create a wort. The heat breaks down the starches into fermentable sugars, which escape the grain and move into the water. Next, the wort is drained and the ensuing liquid becomes the ferment for vodka, also known as the wash. For potatoes the procedure is the same, just mash the potatoes to facilitate the heating and conversion of the starches.

Following the fermentation process, the wash is put into the still and is run once through a reflux and at least twice through a pot still. As mentioned above, the more bubble plates closed off in the reflux still, the higher the proof and the less the flavor. Also, some people might choose to filter the vodka through charcoal, which adds a slightly smokey flavor but also gives vodka its crisp taste it is known for. Finally, the spirit will need to be cut. Since the spirit is distilled at a high proof (usually around 190 proof, or 95% alcohol) it needs to be cut down to your preferred taste. Most vodkas are cut to 80 proof, or 40% alcohol. Vodkas tend to be clear and are not aged in barrels. Naturally, there are exceptions and you will find a few distillers abroad who will flavor and age their vodkas (which resembles more a brandy), but this is not an option in the US.

Once it’s all done you can drink it like vodka.