English
High Quality Products Can Be Purchased.
You are here: Home » News » A Brite Tank

A brite tank, also known as a bright beer tank, is a vessel used in the brewing and packaging of beer. The beer is typically carbonated and conditioned in the brite tank before being packaged in cans or bottles.

The brite tank allows for more consistent carbonation levels and can help to improve beer clarity. In addition, using a brite tank can help to reduce the amount of oxygen that beer comes into contact with, which can help to extend its shelf life.

Brite tanks are often made of stainless steel and have a cylindrical shape. The beer is typically stored in the brite tank under pressure, which helps to keep it carbonated. The tanks are usually equipped with a beer stone, which is a small piece of calcium oxide that helps to remove beer haze.

Brite tanks are an essential part of any beer brewing operation. They can help to improve beer clarity, reduce oxygen exposure, and ensure consistent carbonation levels. When choosing a brite tank, it is important to consider the size, shape, and material of the tank. The type of beer you plan on brewing will also dictate some of the specifications of your brite tank. 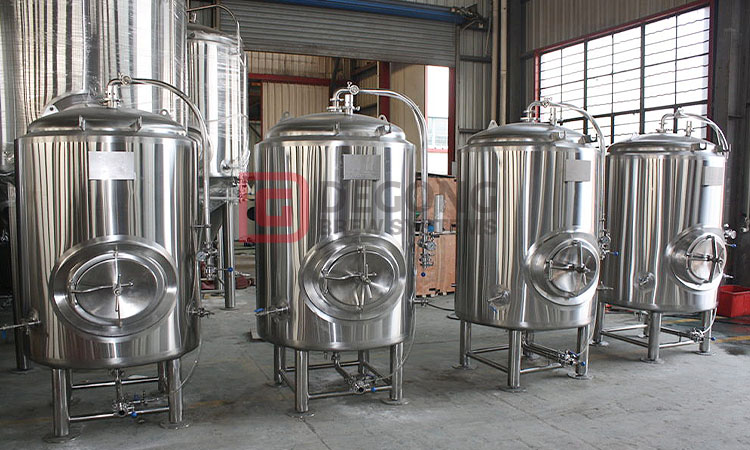 What Is The Point Of A Brite Tank?

A Brite Tank is a vessel used in the brewing process to hold beer that has been clarified or “brightened” and is ready for packaging. The tank is usually made of stainless steel, is pressure-rated, and is fitted with a thermometer and temperature controller to keep the beer within the desired range. The primary purpose of a Brite Tank is to allow brewers to package beer that is ready for sale, without having to first send it through a long and expensive cold-storage or filtration process.

Is A Brite Tank Necessary?

A Brite Tank is not necessary for brewing beer, but it can be helpful. A conical fermenter allows for greater clarity while allowing you to transfer off the yeast in a more complete way. When you pull the yeast out of a conical you leave a layer of yeast on the walls and in the cone. This can lead to off flavors in your beer. A Brite Tank allows you to transfer the beer off of the yeast without transferring any of the yeast sediment. This can help produce a cleaner, more flavorful beer.

Is It Brite Or Bright Tank?

The term “bright tank” is typically used to describe a vessel in which beer is placed after primary fermentation and filtering, so it can further mature, clarify and carbonate. The bright tank may also be used for storage prior to kegging, bottling, canning and packaging.

Can You Serve Beer From A Unitank?

Yes, you can serve beer directly from a Unitank. However, we always recommend transferring the beer to a dedicated serving vessel such as a Brite Tank or Keg to avoid the inadvertent pickup or mixing of fermentation byproduct in the finished beer.

How Long Will Bright Beer Last?

Bright beer is a type of beer that has been filtered and/or pasteurized, which gives it a clear appearance. It has a shelf life of 7 days unopened. Once opened, we advise consuming within 3-4 days irrespective of the container type. Rough beer will last longer if stored under the correct conditions, however once open we again advise that it is consumed within 3-4 days.

What Does Bright Mean In Beer?

The term “bright” is used by brewers to describe any beer through which an observer can see clearly. In general terms, a beer can be said to be bright if one can read large print through a glass of beer when the paper is held behind the glass. Brightness in beer is often a sign of good clarity, although it is not always the case.

The term “brite” is an Old English word that means “bright.” It is used in brewing to describe a type of malt that has been kilned at a high temperature, which results in a light color and a high degree of enzymatic activity.

What Is A Unitank Used For?

Unitanks are used for both fermenting and carbonating beer. They provide a high level of flexibility in the brewer’s cellar, as they allow the brewer to do both in a single vessel. This is an ideal solution for brewers who need to be able to quickly and easily change their fermentation and carbonation plans.

What Is A Beer Serving Tank?

A beer serving tank is a type of stainless steel vessel that is used to store and dispense carbonated beer. These tanks typically utilize a self-cooling, bag-in-tank system that can be used directly in a taproom. This allows breweries to transfer the carbonated beer straight from a brite beer tank with the ability to serve in just a few hours.