English
High Quality Products Can Be Purchased.
You are here: Home » News » Lautering

Lautering is a method of separating sweet wort from spent grain. Historically, especially in British ale brewing practice, mashing and lautering often took place in a single vessel, a combination mash–lauter tun. But brewers soon realized that optimizing separate vessels for each part of the process of wort generation and recovery would lead to improved efficiencies and beer quality.

A lauter tun is a circular vessel, often wider than the mash tun, into which the finished mash is transferred. The mash is usually heated to a higher temperature than is needed for enzymatic conversion. This reduces the viscosity of the wort. In the lauter tun, to ease wort runoff, the grain bed is often shallower than it is in the mash tun. Modern lauter tuns are usually constructed of stainless steel and are equipped with slotted false bottoms that are made either from wedge wire or machined solid plates. The wedge wire offers larger openings than a machined bottom, but both allow the unrestricted flow of clear wort through them. There is also an outlet for spraying sparge water over the grain bed to replenish the wort as it drains out.

Most lauter tuns are equipped with a series of rakes and knives that are attached to a rotating assembly, which can be raised and lowered. These knives are angled so that they gently lift the grain and make cuts through the grain bed. This also helps to improve the grain bed’s porosity and reduces any pressure differential between the top and bottom of the bed, ensuring an even and easy runoff. A plow is usually also part of the assembly. It can be lowered close to the false bottom to remove the spent grain through a door in the base of the lauter tun. At the very bottom, a lauter tun is fitted with several collection tubes, all of similar flow characteristic, to carry the drained wort away to the kettle or a holding vessel. 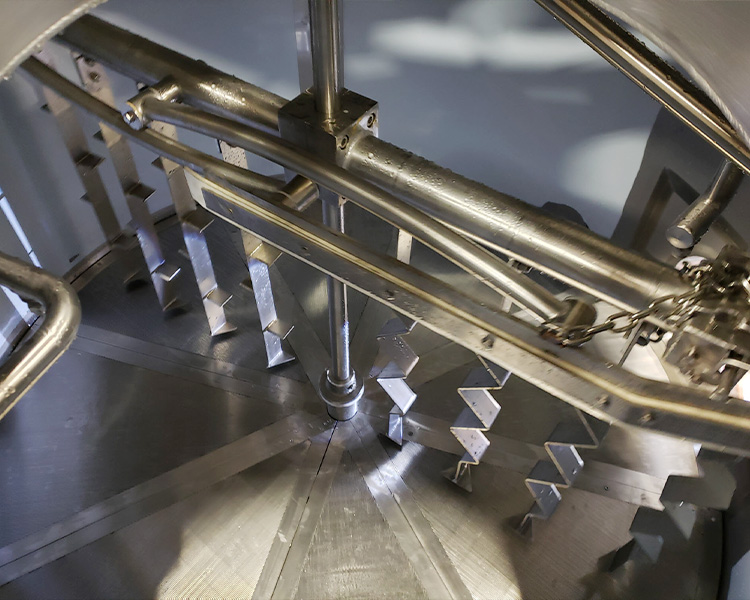 Modern automated lauter tuns include sensors that detect pressure and flow rates and feed such data back to a computer that controls the raking system. This optimizes the flow through the grain bed.

In the lautering sequence, first the space under the plates needs to be flooded to a depth of 1 to 2 inches with hot brewing water to warm the vessel and to ease dispersal of the mash when it is pumped into the vessel. The entire stirred mash is transferred from the mash tun to the lauter tun using a specially designed pump. The lauter tun is filled from the bottom up. The mash is allowed to settle for a few minutes before some wort is drawn from the bottom and returned to the top of the mash bed in a process called recirculation or by its German name of vorlauf (literally “prerun”). During recirculation, the grain bed serves as a filter material. This continues until the turbidity of the wort decreases to an acceptable level, after which the flow is diverted to the brew kettle.

Once the wort level drops slightly below the top of the grain bed, sparge water sprayed from the lauter tun dome replenishes the liquid in the lauter tun and dissolves more solids from the spent grain. It is possible to match the rate of sparge with the rate of wort recovery so the grains remain immersed at a constant level. Occasionally the rakes and knives can be employed to gently open up the compacted grain bed. Collection of wort continues until the required wort volume is collected in the kettle at the desired strength. The remaining liquid is drained from the lauter tun and the spent grain is removed. It often becomes cattle feed.