The most important ingredient for Gin? If you are familiar with the French language, you can recognize it by the word: As 'Gin' is derived from the French term 'genévrier', which means 'juniper' in English. By definition, Gin is a neutral alcohol of agricultural origin (like grain spirit or Vodka), to which juniper and other spices are added. There are also the so-called botanicals, meaning plant extracts added to flavour the Gin. These plans can be for example citrus fruits such as lemons, limes and bergamots; herbs, like Mediterranean herbs such as rosemary and thyme; flowers like elderflower and lavender or spices such as pepper, cardamom and coriander. With all these additional flavours, the law requires juniper to dominate the aroma in most Gin varieties - whether it is extracted from dried or fresh berries is irrelevant.

Gin can be created in different ways, because neutral alcohol can be flavoured by a number of techniques. Roughly speaking, however, every Gin passes through the following production steps. 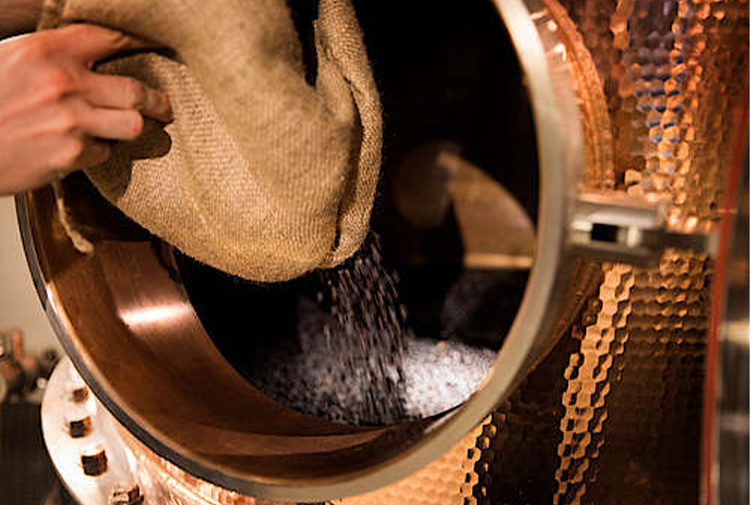 Juniper in the Gin Still

In contrast to a distillate like Whisky, the components of Gin do not have a sufficiently high sugar content to produce alcohol. During the alcoholic fermentation of Whisky, the yeast strains transform the sugar contained in the grain into alcohol and carbon dioxide (CO2), an odourless and colourless gas. Since this high sugar content does not come about with the juniper berries and other botanicals in the Gin, neutral alcohol is used as a basis here. Usually the base alcohol is made from grain or potatoes. The EU regulation, however, only requires an 'alcohol of agricultural origin', which is why Brandy made from Wine is also a possibility.

Gin manufacturers are free to choose which alcohol base they use to produce their products. Many do not even distil the spirit themselves, but instead purchase it from other distilleries. Wherever the alcohol comes from, it must be 'ethyl alcohol of agricultural origin'. About two thirds of Gin producers use wheat. Whisky distilleries naturally use malted barley as the raw material for their alcohol. Many young new distilleries produce Gin as well as Whisky to bridge the waiting period until the first Whisky has matured for at least three years. In this way, sales can be made with other products before their Whisky is ready for sale. Five percent of the manufacturers state that they use potatoes, rice or corn as the raw material for their basic alcohol. These are also starchy products that can be fermented and then processed into Gin. Ten percent of Gin producers use other raw materials of agricultural origin: grapes fermented to make Wine and then distilled to make Brandy; sugar cane or molasses; or apples, fermented to Cider and then distilled to Gin instead of Calvados.

Some producers also use the juniper berries themselves as raw material: juniper brandy is distilled from fermented juniper berries and mixed with grain spirit flavoured by maceration. Both are then distilled together again in another still, resulting in Dry Gin.

The term is derived from the Latin 'macerare', which means 'to dissolve' or 'to soften'. By definition, maceration is the softening of plant tissues in prolonged contact with liquids. Various spices or fruits are placed in alcohol (or an alcohol-water mixture), which extracts colours and especially aromas from the botanicals. If, as with Gin, several different botanicals are used, the raw material that takes the longest time to release its aromas is the first to enter the 'bath'. 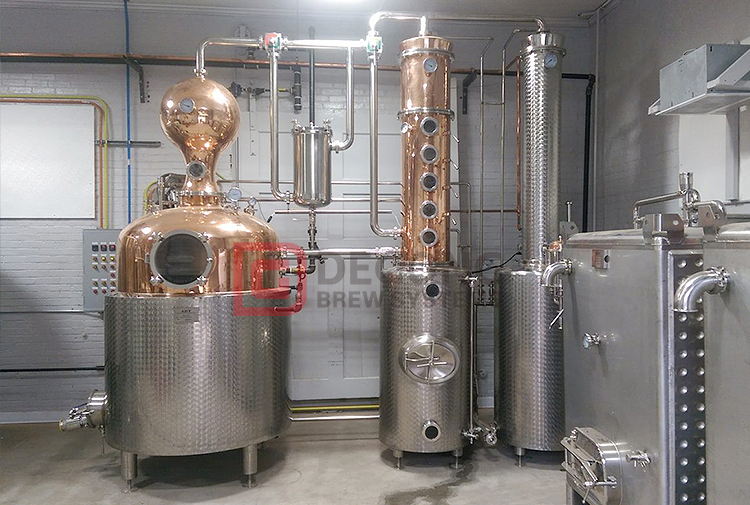 After the 'aromatic bath' of the Gin, it is distilled. Gin stills are usually fired with gas or electricity. The mixture of alcohol and spices is heated in the still during distillation, causing the flavoured vapours of the alcohol to rise. The alcohol vapour is fed into a cooled spiral at the top of the still. The vapour condenses, becomes liquid and is collected. The result is a high-proof Gin with about 96%.

But not every Gin producer is a Gin distiller! Not all Gins are distilled. Some manufacturers merely purchase alcohol for the maceration. They do not distil again, but mix a Compound Gin. Other manufacturers, however, are also distillers, because they distil the base alcohol again. The transfer of aromas to the Gin in the still is also possible without prior maceration: a slow distillation can also extract the aromas from the ingredients, which are then transferred to the distillate via the alcohol vapour. Some distilleries even work with an aroma basket that is fixed in the still. This basket contains the respective botanicals. During distillation, the alcohol vapors rise through the basket and simultaneously absorb the aromas of the botanicals. This process is called percolation.

Gin does not necessarily have to be stored after distillation. However, most distilleries still prefer to let their Gin rest for a while before bottling. In this way, the different aromas blend harmoniously into one unit. For a period of between two and six weeks, the distillate is usually filled into steel tanks, glass balloons or stoneware containers that do not release any aromas into the Gin. There is also cask matured Gin, the so-called 'Reserve Gin'. This is a distillate that is intended to take on the oak aromas and also the brown color from the respective cask. The wood-oxygen-contact leads to the formation of new aromas. Nowadays, the maturation in second fill casks is also common in the production of Gin, just like in Whisky. So there are for example Bourbon Whiskey cask matured, Vermouth cask matured, fruit Brandy cask matured and even Sherry cask matured Gins. These Gins also absorb aromas from the Wine or Brandy that was previously stored in the cask.