Learning which yeast is best, and when, is the beginning of beers that have the right gravity, flavor, and finish.

The battle over whether dry yeast or liquid yeast is best for attenuation may never shake the foundations of the brewing world. But knowing the differences between the two types of yeast can help you decide which one’s right for your beer and attenuation goals.

In days of yore (whenever yore was; probably sometime before yesteryear), dry yeast had something of a bad reputation. The manufacturing process often produced impure or inefficient strains, sometimes contaminated with bacteria. Dry yeast was regarded as, well, kinda crummy compared to its liquid counterpart. Science and improved packaging have changed all that, and modern yeast produces outstanding beers.

Dry yeast is pure, sterile, and packed with nutrients. It can be pitched directly into the wort without the need for a yeast starter. It’s got a relatively long shelf life and tolerates temperature fluctuations during shipping and storage. It’s also generally less expensive than liquid yeast.

Better still, dry yeast contains more cells per package than liquid yeast, so a single package of dry yeast not only costs less than liquid yeast, but provides more conversion power. Pitching large volumes of beer, or crafting high-gravity brews that rely on precise attenuation, is more affordable when you use dry yeast.

Capturing an entire culture in a bottle might sound like the fever dream of a mad scientist. With fewer cells per package and a higher price tag, liquid yeast requires a little more TLC than its dehydrated cousin. It makes up for the bother, however, with increased variety.

Depending on the recipe you’re brewing, you’ll either need to use more packages when using liquid yeast or grow yourself a yeast starter. Using a starter can help you keep costs down and increase your available cells without having to buy additional packages. Yeast washing can help extend the lifespan of your strains as well.

Liquid yeast also has a shorter shelf life than dry yeast—most strains live just three months, max. And because the yeast in the bottle is movin’ and groovin’ instead of waiting to be activated, it’s much more sensitive to environmental and temperature changes.

Variety is the spice of life and beer. Many strains of yeast are too delicate to survive the drying process, and can only be found in liquid form. So if you want to try something exotic or your signature brew requires a special strain that can only survive in the tears of a lonely unicorn, liquid is the way to go. 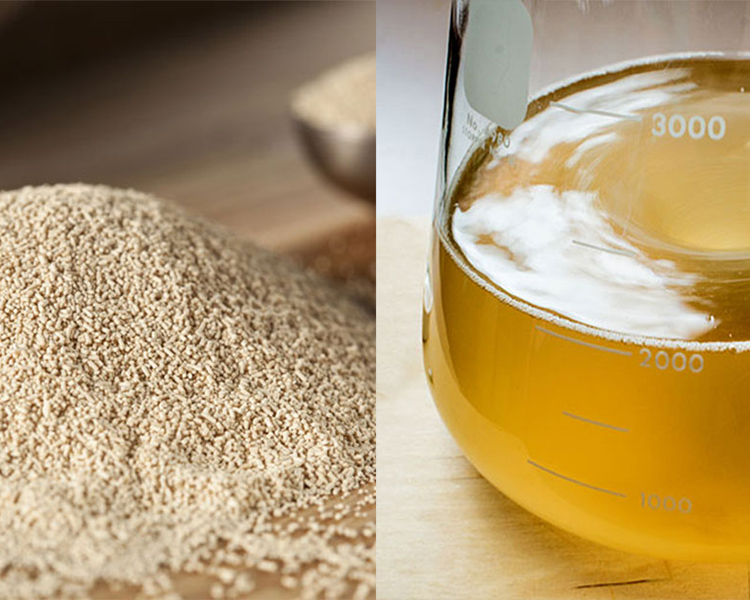 What is Yeast Attenuation?

When a substance becomes thin, fine or more scarce, it’s undergoing attenuation. The root of the word comes from the Latin attenuatus, which means “to make thin.” When you’re talking homebrewing, attenuation refers to a drop in the specific gravity, or density relative to water, of your wort. It’s the yardstick by which you judge the success of your yeast.

As a yardstick of homebrewing success, attenuation is best expressed as a percentage indicating how many of the convertible sugars in your original wort have been converted into alcohol and CO2 by yeast during fermentation. Most yeast strains attenuate somewhere between 65% and 85%. So if, for example, your beer has an attenuation of 75%, that means ¾ of the sugars have been devoured and converted by yeast.

Not all sugars are fermentable, and yeast are never quite 100% efficient, so the remaining 25% of the original sugar in your wort is there to stay. This is great if your beer has a target attenuation of 75%, but not so great if you’re aiming for a drier, stronger brew with an attenuation of, say, 85%.