English
High Quality Products Can Be Purchased.
You are here: Home » News » Difference Between Beer Bottles and Cans

Difference Between Beer Bottles and Cans

Bottled beer has been around for a long time. Some brewers fill bottles with still beer and a bit of sugar, like casks. The secondary fermentation in the bottle produces carbonation and a thin layer of yeast sediment in the bottom. Other brewers carbonate their beer at the brewery then fill the bottles with it. This gives brewers more control over the final product by allowing them to control the level of carbonation in their beer.

Although some brewers still use corks, most seal their bottles with the familiar metal cap. A liner on the inside of the cap seals the bottle and the metal edges of the cap crimp around the lip of the bottle to hold it in place and maintain the seal. A well-sealed bottle protects beer from oxygen well and for a long time.

Most beer bottles are made of brown, green or clear glass. All three colors let in light although brown lets in a lot less than the other two. If you have ever had a skunked beer, also called light struck, then you know why this is a problem. The unpleasant odor and flavor are caused by ultraviolet light hitting certain molecules in beer, a process that can happen very quickly. So, bottles need to be packaged and/or labeled in a way that prevents light from getting through. 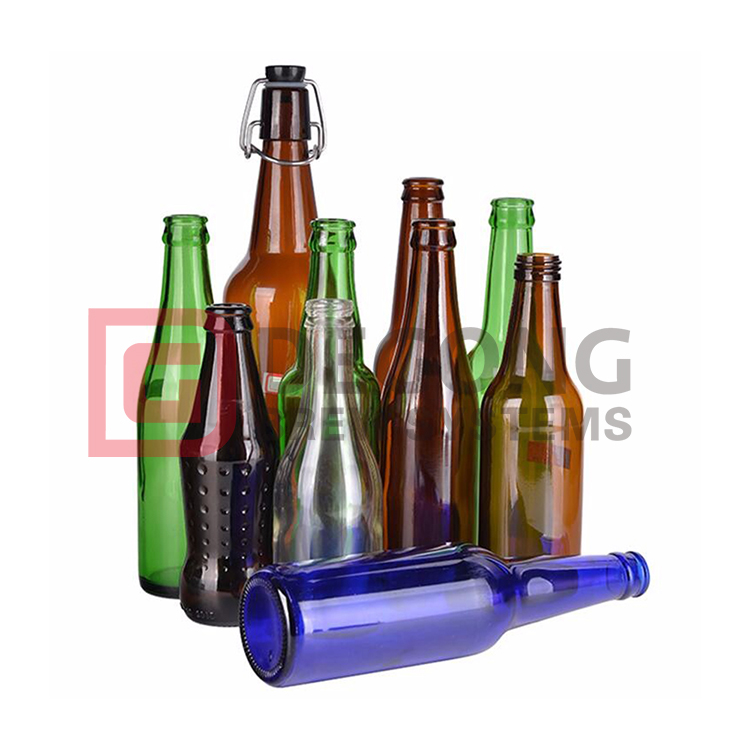 Beer cans offer the same protection as kegs. And, since they only contain single servings, there is no need to rig up a pressure system. But what about that metal taste? One perennial complaint that we hear about beer cans is that the beer they contain takes on a metallic taste. Let's consider this. In the first place, only one of the four common beer containers, bottles, is not metal. No one has complained of draught beer tasting of metal. Secondarily, beer cans are lined on the inside. The beer actually never comes in contact with metal.

So, where does that damned metal taste come from? In fact, it is not a taste at all. The senses of taste and smell are closely related. If you have ever noticed how bland food can sometimes taste when you have a cold then you know what we're talking about. That metal taste is coming from the smell of the beer can. When you drink directly from the can, you are shoving a big slab of metal in your face. It is no wonder people think that canned beer tastes like metal.

Use a glass. Problem solved.

No conversation about beer packaging is complete without a mention of pasteurization. This process, designed to kill any living microbes in beer including yeast, is used by some brewers to sterilize and stabilize their product. Both pasteurized and unpasteurized beer is sold in bottles, kegs, and cans.

When it was first introduced in the brewing industry in the late 1800s, it was revolutionary. These days, it is disdained by some folks of the beer community. Beer, they explain, is a living thing and should be enjoyed as such. Pasteurization and over-filtration take away the flavor of the beer.

Whether that is the case or not―we've never noticed burnt sugar in our beer―pasteurization is not as vital as it once was to provide the market with good beer. With the sanitation techniques that modern brewers use and good use of refrigeration up and down the supply line, there is little chance that unpasteurized beer will spoil before it gets to you.