You may think the colder the beer the better, right? Although this may be true for big, mass-produced beer companies, it is not exactly the case when it comes to all craft beer styles. We’re going to go through and break down the ideal beer serving temperature for different styles of craft beers for the best experience.

Temperature greatly affects our taste buds, as well as the flavors and fragrances expressed by a craft beer. Colder temperatures weaken flavors; meanwhile flavors are more prominent at warmer temperatures. Now we don’t necessarily want to weaken the taste and aroma of a beer, but there are reasons to serve some craft beers colder than others. Craft beer temperatures are comparable to how red wines are served at room temperature and white wines are kept refrigerated or on ice to stay cold.

So first, let’s clarify why we stated above that big, mass-produced beers should be served extremely cold - around 35 to 40 degrees Fahrenheit.

The icy cold temperatures of these mass-market lagers typically hold more CO2 gas which masks the taste of the beer. They are often served this way because they are cheaply made beers with rice or corn as their grain and have no added special flavors or aromas—hence why they are used for easy drinking and chugging in beer games, could you imagine trying to down a slightly.

Now let’s move up the temperature chart into something slightly fancier.

The next tier ranges from about 40 to 45 degrees Fahrenheit, and is defined as being just cold, not very cold like the light lager beers served at sub 40 temperatures. In this tier you will likely find the best expression of Pilsners and Wheat beers. Since a majority of these are lower in alcohol and have a lighter body it is acceptable to enjoy them at a relatively cold temperature. 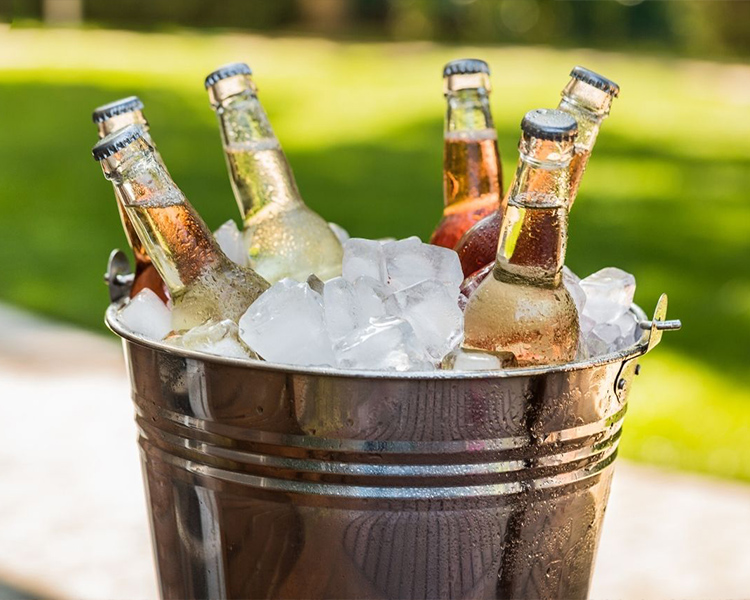 Moving on, we have the 40 to 45 degree Fahrenheit range, which brewers refer to as chilled. On this level, India Pale Ales (IPAs), American Pale Ales, Porters, and almost all Stouts preform their best.

Since beers like IPAs often have fruity characteristics and a hop forward presence, they do better at this middle ground temperature. Similarly, Porters and Stouts having moderate alcohol levels and medium bodies, makes them a perfect candidate for this temperature range too.

Warming up a little bit more we have the 50 to 55 degree Fahrenheit temperature range, which is known better to brewers as cellar temperature. In this sector you’ll likely find Belgian Ales, Sour Ales, and Bocks being served. Sour Ales with their earthy and tart expression belong here in particular, for these are flavors you would not want to mask with cold temperatures.

Last but not least, we have the cool temperature section that ranges from 55 to 60 degrees Fahrenheit. In this fragment, is where you find the highest alcohol and fullest-bodied craft beers. Anything that is excessively high in alcohol percentage should be consumed at this cool temperature to best express all the flavors captured within it.

Although this is not always the case, if you recognized the pattern from above, the easiest way to assume your beers serving temperature is that light-bodied, sessionable beers are best when served colder, and full-boded, strong beers are best enjoyed at warmer temperatures.

Nevertheless, this does not mean in anyway that you HAVE to drink your craft beers at these specific temperatures! As long as you enjoy your craft beer, that is all that matters.