English
High Quality Products Can Be Purchased.
You are here: Home » News » Brewery Cleaning and Sanitation

Cleaning and sanitation are an integral part of a brewery and should be taken into consideration at every phase of the beer brewing process. Cleaning proceeds sanitation and prepares the way for sanitation treatment by removing organic/inorganic residues and microorganisms from the brewery equipment. Sanitation reduces the surface population of viable microorganisms after cleaning and prevents microbial growth on the brewery equipment.

There are two types of cleaning detergents: alkaline-based or acid-based detergents that are often formulated with surfactants, chelating agents, and emulsifiers to enhance the effectiveness of the detergents. A detergent must be capable of wetting surface(s) to allow it to penetrate the soil deposits in order to act more quickly and efficiently. The detergent must have the capacity to break the soil into fine particles and to hold them in suspension so that they do not redeposit on the cleaned surface. Detergents also must have good sequestering power to keep calcium and magnesium salts (beerstone) in solution.

Alkaline detergents are most effective in removing organic soils, i.e., oils, fats, proteins, starches, and carbohydrates encountered in brewing. Alkaline detergents work by hydrolyzing peptide bonds and breaking down large, insoluble proteins into small, more easily soluble polypeptides. Alkaline detergents will not remove calcium oxalate and other inorganic compounds that lead to a buildup of beerstone.

Of the cleaning agents, sodium hydroxide (NaOH), otherwise known as caustic soda, is widely used in breweries worldwide. Its effectiveness in dissolving proteinaceous soils and fatty oils by saphonification is virtually unsurpassed. This makes it a natural choice for cleaning sludge off the bottoms of boilers and for cleaning beer kegs. Sodium hydroxide is an acutely excellent emulsifier too. It is unrivaled in its ability to dissolve protein and organic matter if used in conjunction with chlorine, surfactants, and chelating agents.

Caustic/hypochlorite mixtures are particularly effective in removing tannin deposits, but are used for a great variety of cleaning tasks. These mixtures can be used in CIP systems for occasional purge treatments or to brighten stainless steel.

Phosphoric acid is used widely in the removal of beerstone and similar deposits on surfaces such as protein material resins and yeasts. Its performance is greatly enhanced by adding an acid-stable surfactant, which promotes penetration of surface deposits and also assists in the process of rinsing at the end of the cleaning process. Phosphoric acid is not effective in removing beerstone until it reaches 16°C.

Nitric acid not only is used to remove beerstone and other inorganic deposits, it also has biocidal properties when used either as a pure acid or in more stable, less hazardous mixtures with phosphoric acid. In addition, nitric acid attacks protein. 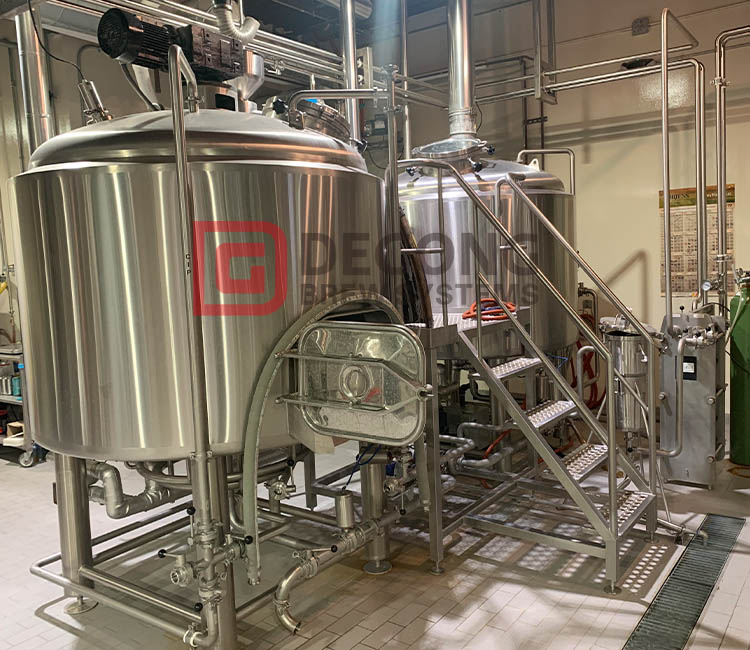