Regarding the origin of whiskey, whether it is Irish whiskey or Scotch whiskey, it is recognized that they have a common ancestor, which is "water of life (distilled spirit)" (Latin is called aqua vitae, Welsh is called uisge beatha) . Later it gradually became whisky in Scots and whiskey in Irish.
Product Description

The main difference between whisky and whiskey is of course the spelling. This reflects the original Scots and Gaelic derivations of the word 'Uisce beatha', meaning Water of Life, with each variation being carried through to modern use. Irish immigration to America in the 18th century means that we also refer to American 'whiskey' spelled with an e.

Scotch Whisky is always spelled without the e. In order to be officially called Scotch whisky:

Production and maturation must take place in Scotland.

Single malt Scotch whisky must be made from 100% malted barley.

Irish whiskey is always spelled with an e – this is a key difference between Irish whiskey and Scotch whisky.

Irish whiskey uses little or no peat, so there is usually no smokiness in these whiskies.

Irish whiskey may contain a distillate of malt, a barley distillate and a portion of grain spirit.

Like Scotch whisky, Irish whiskey must be matured for a legal minimum of three years.

Bourbon is American whiskey that has been made from a minimum of 51% corn with rye and malted barley.

Bourbon is a very small area of Kentucky where bourbons were originally produced, but since 1964 American law has stated bourbon can be made anywhere in the USA.

In Bourbon whiskey, the residue from the pot still is mixed with the mash to create a ‘sour mash’ whiskey.

Distillation of bourbon usually takes place in a column still and then a pot still, but sometimes only column stills are used – Woodford Reserve operate a triple distillation in pot stills.

Bourbon spirit is always matured in fresh oak casks, which are charred to yield more flavour.

Rye whiskey is made in the same way as bourbon, but is made up of 51% rye.

Rye whiskies send to be spicier in character.

Tennessee whiskey is made in the same way as bourbon, but it is charcoal mellowed before maturation.

Most blended Japanese whiskies do use an amount of Scotch malt whisky in their composition – usually this is aged over five years old. 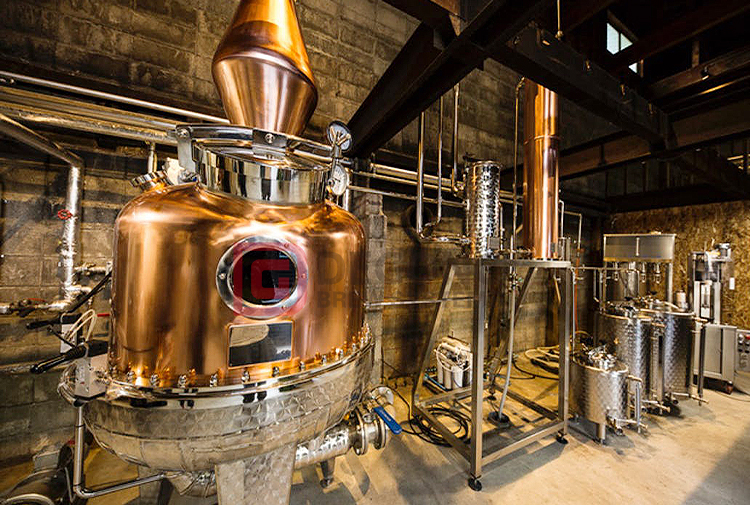 Distillation equipment necessary for the production of spirits

Brandy is a wine made from graps which is then distilled and matured. The term ‘brandy’ comes from the Dutch ‘Brandjewijn’, meaning ‘burnt wine’.

Cognac is a type of brandy which can only be made from wine produced in designated growning regions of western France. It must be matured for at least 2 ½ years, and the age on a bottle of Cognac represents the youngest Cognac used in the blend.

Rum is a spirit produced from fermented and distilled sugar cane products – most commonly molasses. Its origins are the Caribbean, on islands such as Jamaica, Trinidad, and Cuba.

Rum is colourless to begin with and is known as white, or light, rum. Colour for dark rum is acquired by adding caramel, followed by aging in casks.

Traditional vodka was made from potatoes in Russia, however it is now more common to produce it from cereals such as wheat and maize, and it is made all over the world.

Often the spirit is produced in a grain whisky distillery by slightly modifying the way that the Coffey Still is set.

The spirit is passed over a bed of charcoal to mellow before being reduced to bottling strength.

To produce gin, a neutral spirit, such as that used for vodka, is required.

The spirit is then redistilled in a Gin Still, often using botanicals such as juniper berries, angelica, liquorice and cinnamon.