English
High Quality Products Can Be Purchased.
You are here: Home » News » Why is Beer So Popular in Germany?

Why is Beer So Popular in Germany?

As fall approaches, many people begin to turn their attention to cool nights, changing leaves, and bonfires, but others start thinking about Oktoberfest, and as Oktoberfest Celebrations begin, People often associate Oktoberfest with beer and many people wonder, why is beer so popular in Germany? Beer seems to be such an integral part of German culture that it has become a part of the German Identity. What is the big deal about beer in Germany?

Beer is popular in Germany because it has a rich traditional history to their culture and is readily accessible. Germans have historically used beer as a substitute for clean drinking water and even as a nutrition supplement. As the craft grew, Bavarian counties, now Germany, took great pride in their beer, even going so far as to write the Beer Purity Law in 1516 that is still active today. Beer has been a staple of German life and society for centuries as a part of tradition and culture.

History of Beer in Germany

Though beer wasn’t invented in Germany, it was very popular because it was safer to drink than water because of diseases and other contaminants. Several monasteries produced beer for Mass consumption beginning in the southern regions of Germany and Bavaria. The oldest of these, Weihenstephan Abbey, is still in operation today.

Many of the monasteries began beer production to study the science behind the process. It was also a great way to bring in money for The Cloister. The monasteries would set up taprooms to sell beer to customers to go or they would trade it for other goods and services.

Beer became such a staple in Germans’ lifestyle that the Beer Purity Law of 1516, started under the rule of Bavarian Duke Wilhelm IV, was adopted. It only allowed water, hops, and malt to be used in beer, but later included yeast. These regulations are still in use today and most breweries and the vestiges of these old traditions do not seem to be moving along any time soon, not that we are complaining! 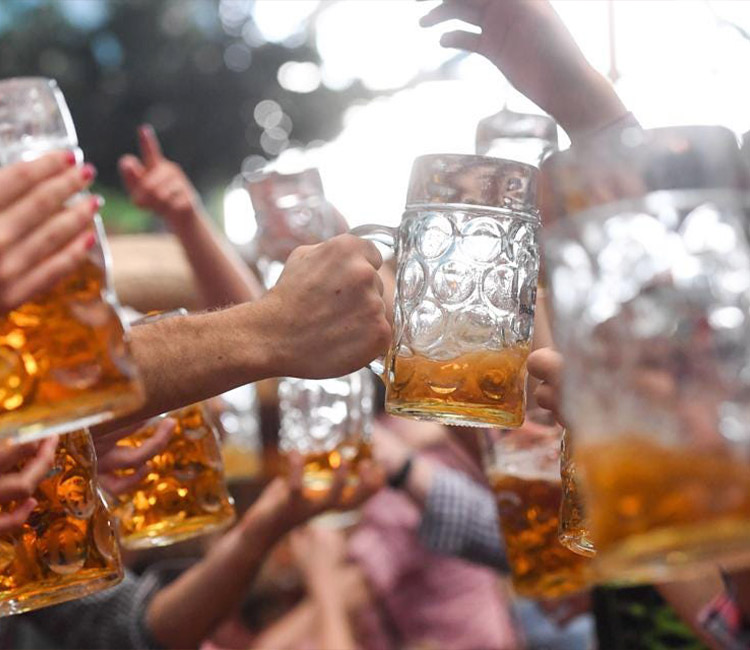 These craft beer brewers are taking advantage of a younger Market looking for something different. with their newer take on old favorites such as loggers and pilsners, are also introducing their versions of IPAs and imperial porters. Craft Brewers are also reviving older styles, such as sour beers by adding fruits to the mix giving it a new spin.

Though Germany has ranked highly as one of the top beer-consuming countries in the past, in the late 1990’s beer consumption began to lessen somewhat. Though the amount of beer consumed has lessened somewhat, the culture surrounding beer drinking is still alive and well. Social traditions ingrained in their society are still seen every day and are commonplace.

It is not unusual to see people drinking publicly, in the places where it is legal, in the park or walking down the street, even on the bus. The tradition of an after-work beer is still very common and not seen as taboo as it is in other societies. Where in the US we would stop at a bar and have a drink with friends, then go home, it is commonplace in Germany to get a beer to take with you to drink on the way home.

The drinking age in Germany is much younger than in the US as well, though the US does have one of the highest legal drinking ages on record at 21. In Germany, in most areas, it is legal to drink beer at age 16. Historically, it wasn’t uncommon for small children to be given beer because of its preference over contaminated water and its nutritional value.

Even superstitions still have their place. Each new glass of beer should begin with a toast. Don’t forget to make eye contact with those you’re toasting with, though.

There’s been around for over a millennium, and nearly every civilization on Earth has had their form of beer. However, the history and passion for beer in Germany are unsurpassed. Germany has held so tightly to its tradition but it still follows a law that was set forth over 500 years ago and still going strong today.

Beer in Germany is not popular, it’s a lifestyle, it’s a tradition that has been passed down from generation to generation. For centuries it’s been a staple in German food stores. It’s been a nutritional substitute. It’s been a way of life that they’ve embraced and that’s become an identifying marker of their society to the rest of the world.

What the rest of the world sees as the popularity of beer has been the cultural heritage that Germans have kept alive despite hardship, strife, war, and famine. Despite outside influences, German beer makers have been able to sustain a long tradition that is embedded at the roots of their very culture. Very few societies can boast such a long-standing devotion to a craft that has left it nearly unchanged for centuries, especially in a country as diverse and progressive as Germany in the Modern Age.