English
High Quality Products Can Be Purchased.
You are here: Home » News » What is the process of distilling alcoholic beverages?

What is the process of distilling alcoholic beverages?

Even newbie whiskey lovers know that their favorite beverage is the product of distillation. But what is distillation, exactly? What’s going on inside those sculpted pots or complicated columns? And what role does distillation play in developing the ultimate character of distilled spirits?

Distillation hinges on a simple principle: Different molecules have different boiling points. Ethanol, for instance, boils at around 172 degrees Fahrenheit, while water boils at 212 degrees Fahrenheit. If you have a solution made up of different molecules with different boiling points, you can use distillation to separate those components by capturing the vapor produced by boiling the liquid.

Take Scotch whisky, for instance. The wash (that’s the fermented liquid made with barley, water, and yeast) loaded into the still is only about 8% alcohol, give or take–not much stronger than your after-work beer. But whisky, of course, is much stronger than that.

To concentrate the alcohol, distillers start to heat the wash in the pot of their stills. Eventually, the wash begins to steam. Because alcohol boils at a lower temperature than water, that steam is much stronger in alcohol concentration than the wash. In the case of Scotch and Irish whiskey (or any pot-distilled whiskey) the vapor travels up into the swan neck (or lyne arm) of the still, where it passes over the top and encounters a condenser. That condenser returns it to a liquid, called a distillate, at which point it exits the still through the spirit safe.

That’s the basic principle, and it applies to other kinds of distilled spirits as well, such as rum, brandy, and tequila. But things get more complicated depending on the distillation process, the distilling method, and, of course, the art of distilling itself.

It’s important to remember that the amount of alcohol in the vapor isn’t a fixed concentration. Instead, it’s a gradient. The first vapors to emerge from the wash have the highest alcohol content. Over time, that content slowly diminishes, until it reaches zero.

To accommodate that gradient, distillers separate the spirit stream into fractions by making cuts. The first part of the run–the heads–is the strongest. But along with ethyl alcohol (the good kind), the heads also contain toxic, volatile compounds like methanol and acetone. Plus, they smell like nail polish remover. So distillers separate the heads, and usually redirect them into the next batch to be re-distilled.

Next comes the good part of the run: the hearts. This section is still full of alcohol, but it also tastes good, often with a strong character of the raw ingredient being distilled. The hearts are captured in a special tank to be filled into barrels later on.

Eventually, the alcoholic strength drops further, and the run enters the tails. This last part of the run is less alcoholic by volume, plus it starts to develop heavy, funky flavors like wet cardboard and old towels. But, just like the heads, most distillers redirect it to the next batch for redistillation so as not to waste any alcohol.

When exactly to make the cuts is one of the most critical decisions a distiller makes. While there are guidelines, there’s no hard-and-fast rule, and distillers rely on their past experience, their senses, their artistry, and their intuition to make the right cuts that will form the foundation for the final flavor profile. 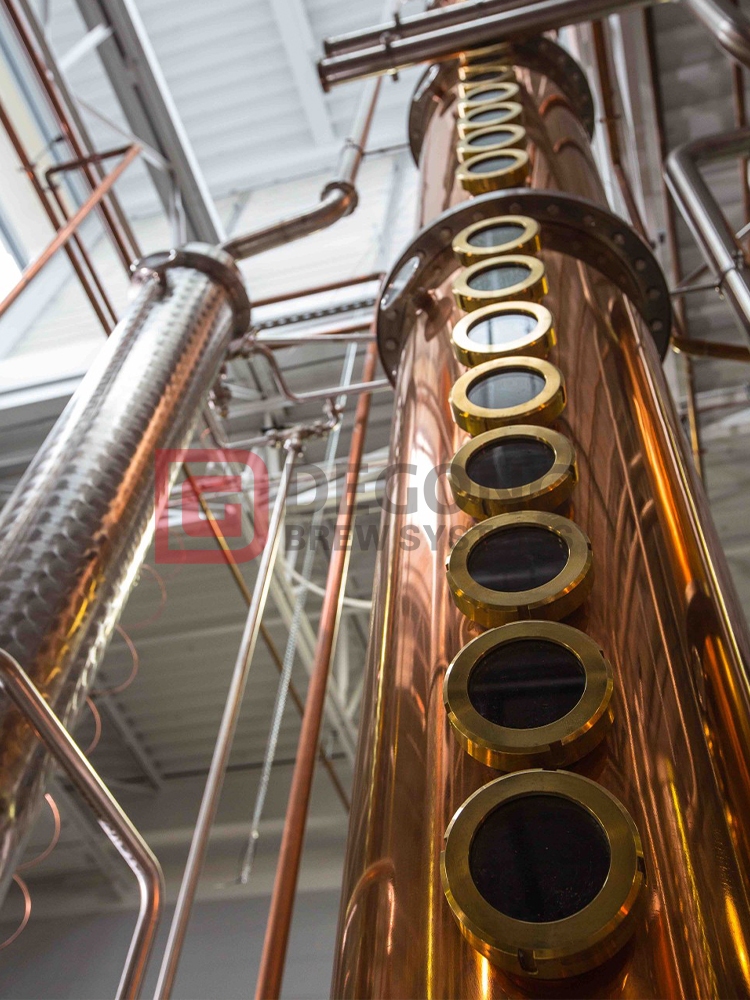 Most American whiskeys like bourbon and rye, as well as many rums, vodkas, and tequilas, are actually made on column stills, a style of equipment most famously associated with the Irish inventor Aeneas Coffey, who patented a version of it in 1830. Instead of the batch system of pot still distillation, his Coffey still could be run continuously, making it more efficient.

Modern large scale bourbon stills operate in much the same manner, relying on steam heat to separate a fermented mash into fractions continuously. They consist of a column filled with multiple chambers filled with porous barriers (either sieve trays or bubble cap trays, depending on the style and location within the column. Fermented wash is piped into the column about two thirds of the way up, while steam is piped into the bottom.

As the steam passes through the wash, the wash begins to boil. The alcoholic vapor then rises through the column, condensing and re-vaporising every time it encounters one of the trays, and becoming more alcoholic in each chamber. Instead of making cuts over time, the still lets distillers extract their desired fraction from the column, while eliminating the spent mash.

Most of whiskeys are made on column stills, simply because that’s the most common type in the United States. But we love a good pot-still whiskey, too, and many of our rums are made on pot stills. They’re just two different ways to make great spirits.