English
High Quality Products Can Be Purchased.
You are here: Home » News » The Origins of Alcoholic Distillation in the West

The Origins of Alcoholic Distillation in the West

Some authors maintain that the ancient Egyptians already distilled alcohol, others credit the Sumerians with being the first, others still the Celts; there are even those who attribute the invention of alcoholic distillation to this or that barbarian population of the steppes. Recent archaeological excavations in Cyprus would seem to prove the use of distillation, probably to make perfumes, around 2000 BC. The number of contrasting theories itself makes such an early date doubtful; what’s more, no one is able to produce reliable evidence, and, regrettably, it has to be said that some historians still mix up fermented beverages and distilled beverages.

It is important to remember that distilling alcohol is difficult, it requires firstly a complex mental process and then a suitable technology. Or, in the words of Forbes, “One forgets too often that at the back of a simple distilling apparatus there are a mass of experiences and experiments and that it represents the combination of several principles of natural science with the ability to make the proper apparatus to execute the operation”.

There is yet another consideration. If, in the long, ancient history of the Mediterranean, before the Classic Age, someone succeeded in distilling alcohol on a regular basis and in drinking it as a beverage, how come that this precious knowledge got lost?

Because one thing is certain, the Greeks and the Romans of the Classic Age did not drink Spirits.

They drank wine, a lot of it, and sometimes they drank beer too. They knew and used, both as a beverage and as medicine, many other fermented beverages made from palm trees, fruit, honey etc. but not strong, distilled spirit drinks. In the famous Symposia of Classic Greece, they drank wine, usually diluted with water in wonderful Attic kraters to diminish its strength. The Romans drank even undiluted wine, they knew several types and were able to distinguish between strong and less strong wines. We also know that they warmed the wine to make it thicker, and that some wines were treated in various ways so as to use them as a medicinal drug; but alcoholic distillation through evaporation and subsequent cooling of the vapors is never mentioned anywhere.

Distillation as such, though, was not unknown. 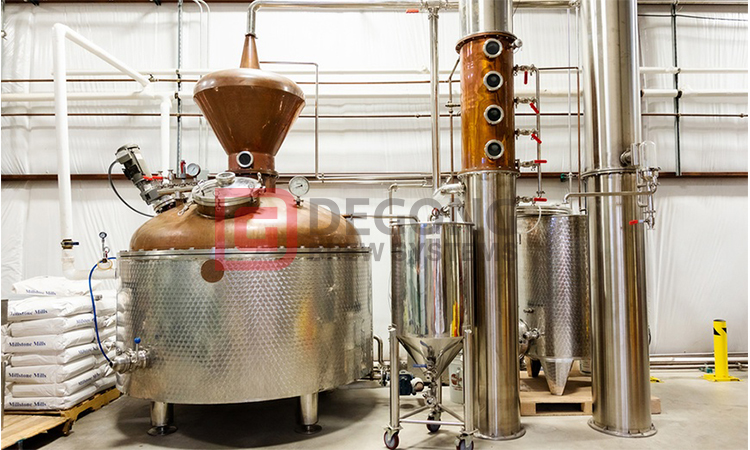 Aristotle and others wrote reflections on the evaporation and subsequent condensation of water. It was also known that the salt water of the sea changed into the freshwater of rain and rivers; the fact that evaporation by the heat of the sun drives the water cycle, and that the water which evaporates falls back as precipitation was also known. To the great Greek physician, pharmacologist and botanist Pedanius Dioscorides, who lived around 70 AD, is attributed the famous sentence “Distillation is like imitating the sun that vaporizes the water and returns it as rain.”

Moreover, craftsmen probably used crude forms of distillation to make perfumes, dyes and in metal work, while sublimation was used for the manufacture of mercury. But, it would seem, nothing more.

Modern archeology was born some centuries ago digging Greek and Roman sites. Well, in the great mass of archeological finds nothing has ever been found, as far as I know, which proves the existence of distilling apparatus to manufacture the alcohol to produce spirit drinks. Moreover, the written sources of the time which have come down to us, including treatises on agriculture, never speak about strong, distilled, spirit drinks.

With only one exception, perhaps. The great Roman naturalist Pliny the Elder, who died in the famous eruption of the Vesuvius of 79 AD (the very eruption that destroyed Pompeii) describes a strange “coelesti aqua” that is, more or less, “heavenly water”. According to him, it was used for preserving grapes and it warmed the stomach pleasantly. It might have been alcohol, but we cannot be sure.

Things began to change later. According to Forbes “We must adopt the general opinion that distillation was first discovered by the Alexandrian Chemists in the first century A.D. until we have further proof.” Alexandria of Egypt had been for centuries the cultural center of the Hellenistic World and around its famous Library philosophers and scientists from all countries studied and experimented in all fields of learning. And, among other things, they invented chemistry. “The Hellenistic era was one of those lucky periods in which craftsmanship and science met and stimulated each other. The young chemistry had the typical rationalistic traits of the older Greek science.” Zosimos, Maria the Jewess, Hipatia, Synesios are only some of the protagonists of a fascinating adventure of human intelligence.

In the texts which have come down to us we find, for the first time, the drawing of a real distilling apparatus: “This is already far advanced in the writings of Maria the Jewess who is generally considered to have invented it. It already consists of the three necessary elements, the cucurbit and alembic, a tube for transporting the distillate and vapours and the receiving flask”

Actually, the traditional name for Pot Still, Alembic, came from the Greek word ἄ μβιξ, that is ambix, meaning “cup”. Only much later did the Arabs appropriate the word, to which they added the definite article in the Arabic language “al”, that is, “the”. And through the Arabs the word entered the languages of Latin Western Europe.

Back to Alexandria, a source of 200 BC says that “sailors at sea boil sea water and suspend large sponges from the mouth of a bronze vessel to imbibe what is evaporated. In drawing this off the sponges, they find it to be sweet water ”; this might be the description of how they distilled sea water.

But did they actually manufacture alcohol? Forbes maintains they did not. According to him, the problem was cooling: “The use of distillation apparatus with very insufficient cooling, so that only liquids with boiling points higher than that of water could be recovered somewhat efficiently.” Other authors claim the opposite. But the lack of conclusive evidence and of a successive development makes me think that, even if some single experiences did take place, they remained isolated and alcohol remained at best a strange and rare liquid, used only for scientific and alchemic purposes.

To conclude, there is no doubt that the foundations of the history of alcoholic distillation in the West were laid in Alexandria, but it is not from there that the path towards commercial production of alcohol on a large scale started.

In 639 the Arabs invaded Egypt. With astonishing speed, the Byzantine forces were routed and had withdrawn from Egypt by 642. In 645 an attempt by a Byzantine fleet and army to reconquer Alexandria was quickly defeated. Since then, Alexandria has remained unshakably in their hands and Egypt became one of the centers of Arabic and Islamic culture, up to the present.

Arabic and Islamic culture soon deeply absorbed Alexandrine and Greek learning, which at the time had almost completely disappeared in Latin Western Europe, plunged into the dark centuries. Among the legacy of the Alexandrines, the Arab scientists and alchemists learned also distillation techniques, they improved them and made large use of them.