English
High Quality Products Can Be Purchased.
You are here: Home » News » The most popular spirit in colonial America - Rum

The most popular spirit in colonial America - Rum

Whiskey may have the title of "American Spirit," but rum was at the center of American colonial life (1607-1776). It served as currency in lieu of paper money, was believed to have medicinal properties, and even fostered a budding cocktail culture.

However, at the start of the Revolutionary War, as nationalism rose and people were less and less exposed to molasses and other necessary ingredients, rum faded from view. Whiskey ingredients became increasingly affordable for many in the continental United States, quickly filling the void.

Whiskey may be an iconic American drink right now, but it's time to start giving rum the credit for being an integral part of American history and culture.

For much of the 17th and 18th centuries, alcohol was considered safer than water. But rum was prized over other beverages since it was easier to transport and more shelf-stable than drinks like beer and cider.

It was used for more than a substitute for water, however. Rum allowed those privileged enough to hold capital, namely European immigrants, to purchase a bulk commodity of low value—molasses—and turn that into a highly value-added product—rum.

In addition, it was used as currency and many bills of sale include rum as part of the buyer’s purchasing power.

During the 17th and 18th centuries, New England became part of the triangular trade route, commonly known as the trans-Atlantic slave trade, between Europe and the Gold Coast of Africa, in part because of rum. The American colonies traded resources like fish and lumber to colonies in the West Indies for molasses, which they distilled into rum. Some of it was consumed locally, but the majority was sent to Europe and then on to Africa to be exchanged for enslaved people.

By the early 1700s, there were a number of rum distilleries in the American colonies because the ingredients needed to make it, particularly molasses, a waste product from sugar production, were also in ready supply from various British territories in the West Indies.

The pervasiveness of rum resulted in the development of a variety of drink styles. Among those still popular today are things like rum punch and grog.

However, this all changed during the American Revolutionary War (1775–1783). 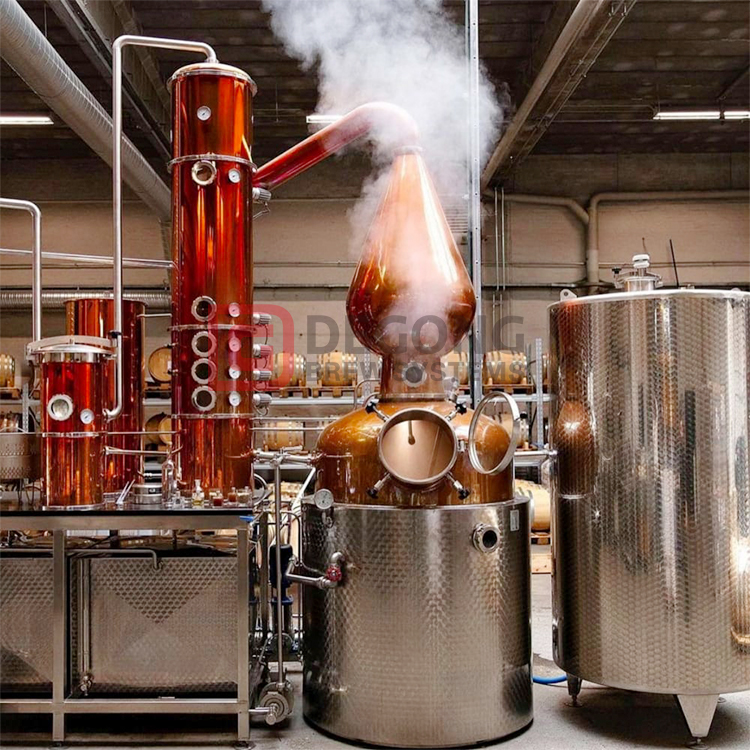 Rum and the Growing Feeling of Nationalism

“The impact of the war on commerce was great,” says Steve Bashore, director of historic trades at George Washington’s Mount Vernon. The British Navy was still in control of major trade routes, so it was able to block raw materials like molasses from getting to the colonies, which damaged domestic rum distilleries, he says. As a result, rum became harder to find.

Demand for spirits remained high, however, and whiskey rose to fill the void. It took rum’s place as a medium of exchange, and, even after the war, whiskey continued to be the spirit of choice because it could be made with local corn when sugar and molasses imports remained low.

Bashore believes there was another reason whiskey’s popularity grew.

After the Louisiana Purchase in 1803, which effectively doubled the landmass of the United States, Americans began moving westward.

President Thomas Jefferson (1743–1826) authorized the purchase of land from the French because he believed the health of the republic depended on an independent citizenry and that land ownership, specifically small farms, was integral to independence.

Jefferson successfully fought to make land more accessible to small-scale farmers, whereas before, land was out of reach for most people other than the wealthy or land speculators.

As a result, there was not only considerably more room to grow corn, but also considerably more people growing it. This eventually resulted in a surplus. Because corn doesn’t keep well, farmers needed to do something with the portion of their crop that they couldn’t sell locally. To avoid loss due to spoilage, they distilled it into whiskey.

Compared to corn, whiskey was also easier to ship east to markets in places like Philadelphia. Production remained a backyard affair because it was easy to burn corn in large stills. That said, according to Bashore, there were larger distilleries. For example, George Washington had a distillery, one of the largest of the day, that produced nearly 11,000 gallons of whiskey in 1799.

Whiskey became such an important part of the U.S. economy that after the Revolutionary War, Treasury Secretary Alexander Hamilton (1757–1804) proposed taxing it to help pay down the national debt of $79 million, the equivalent of $2.4 billion today. This eventually resulted in the Whiskey Rebellion in 1794.

After a rocky 20th century, due to Prohibition and lack of availability during World War II, American whiskey is enjoying a resurgence thanks to domestic and international interest in American-style food and beverages and the appearance of whiskey in popular media like the TV show Mad Men.

Rum, on the other hand, faded further from the public consciousness in recent years.

“Rum that had been run during Prohibition may have been adulterated, cut, or not what it purported to be, reducing confidence in drinkers and tarnishing rum’s name,” says Campbell. “Tiki bars were a longstanding rum fashion, but as the Vietnam War entered the lives of many Americans, a tropical bar was not the romantic escape it had once been presented as.”

While whiskey remains tightly meshed with the identity of the United States, rum is making a comeback. According to Campbell, it’s “having a new day to connect with modern drinkers” and is “shedding the pirates and unfortunate names and images of the past to embrace all communities in America.”

So perhaps it isn’t long until the United States has two iconic spirits.