English
High Quality Products Can Be Purchased.
You are here: Home » News » History of Fermentation Vessels（2）

Developments continued during the late 1800s with upright cylindrical vessels, some with sloping or conical bottoms. In 1960s a breakthrough in technology advanced a new principle—primary fermentation and maturation could be carried out in the same vessel. The breakthrough was the modern “cylindroconical” tank, an upright cylindrical tank with a slanted, cone-shaped bottom. These were dubbed “universal tanks,” or unitanks for short. Unitanks became widespread in the 1970s, and over the past 40 years the cylindroconical tank has—with a few important exceptions related to the brewing of very traditional beer styles in Belgium and on the British Isles—replaced all other types of fermentation vessels. It has been commonly accepted in the brewing industry that cylindroconical tanks have numerous advantages over all older tank designs:

Interestingly, the cylindroconical tank has roots back to patents dating from 1908 and 1927, but the revolution in stainless steel fabrication was necessary to make the manufacture and use of such tanks practical. The proliferation of cylindroconical tanks began in Ireland in the early 1960s, where vertical (i.e., cylindrical tanks standing upright) stainless steel tanks of up to 11,500 hl (9798 US bbl) were in use. In 1965 the Japanese brewery Asahi patented a large vertical tank with a sloped bottom, allowing the yeast to be harvested from the low side. See asahi breweries. The first large-scale brewery to install large numbers of cylindroconical tanks was the Rainier brewery in Seattle, Washington, around 1970. These tanks, dubbed Rainier tanks, did have a conical bottom, but with a very shallow cone angle of only 25°. Soon after, it was discovered that a steeper cone angle (70° is the modern standard) gave a more convenient cropping of the yeast that settled in the cone bottom after fermentation. Further evolution and development of the technology of cylindroconical tanks focused on the number and placement of cooling jackets. Cooling jackets are hollow “belts” welded onto the outer surface (but inside the layer of insulation and outer cladding) of the tank and through which coolant (either glycol at subfreezing temperatures or direct expanding ammonia) can be circulated, thus cooling the contents of the tank. The placement and size of cooling jackets are critical to ensure the optimal movement and mixing of the beer during fermentation, thus ensuring the homogeneity that is particularly important in large tanks. During fermentation, the evolution of CO2 can create powerful currents in the fermenting beer. When jackets toward the top of the tank are cooled, the cooled liquid drops toward the bottom of the tank. At the same time, beer toward the bottom of the tank, warmed by its own fermentation, rises toward the top of the tank, only to be cooled again. This action helps create a circulation and mixing of the liquid, promoting faster, healthier, more complete fermentations.

The overall geometry of tanks was also being explored in the 1970s and 1980s, resulting in taller and slimmer cylindroconical tanks, which saved floor space. However, it was soon found that once these so-called rocket tanks (in reference to their appearance) exceeded a height-to-diameter ratio of 5:1, good mixing could not be achieved and the yeast suffered from excessive hydrostatic pressure. Thus, today cylindroconical tanks are generally built with height-to-diameter ratios between 1:1 and 5:1.

Modern cylindroconical tanks have more than one cooling jacket. This serves two purposes: first, to give the aforementioned optimal thermal movement of the beer during fermentation, and second, to allow the brewer to operate the tank at less than full capacity. A cylindroconical tank will also have a “cleaning device” permanently installed in the top, allowing for easy and automated internal washing of the tank. See cleaning in place (cip). Further, there may be more than one outlet from the tank bottom, allowing the brewer to draw off beer from the tank without inclusion of yeast that has settled in the bottom of the cone.

Cylindroconical tanks were, from their introduction, well suited for being placed outdoors, thus saving space and building costs for larger breweries. Outside tanks are situated in so-called tank farms, where they are placed very closed to each other. This is made possible by the fact that no manual operations or servicing of the tanks take place in the tank farm itself. Rather, all piping to and from the tanks comes from the tank farm and through an adjacent wall to the beer-processing area inside the brewery. All automatic pumps, valves, or swing arms that need to be operated when using the tanks are placed here, largely eliminating the need for long hoses. 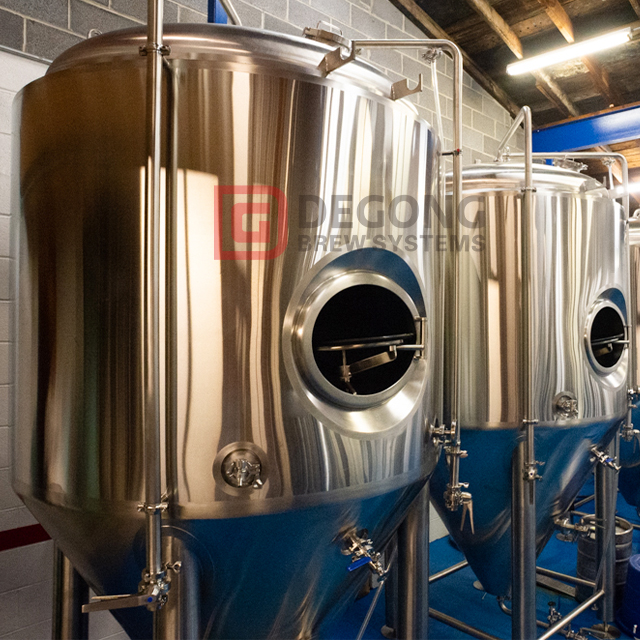 State of the Art in Fermentation Vessels

The most modern breweries still use cylindroconical tanks. The next step in process development could be the introduction of continuous fermentation with immobilized yeast. The most recent developments in the technology of these tanks involve what one could call “the accessories” of the tanks in the sense of mechanical mixing (recirculation by pumping from the bottom to the top) of the fermenting beer, as well as advanced control systems that automatically measure and control the progress of the fermentation. See continuous fermentation and immobilized yeast reactor.

Not all of the traditional tank types have vanished with the introduction of the cylindroconical tank. The requirements of the process involved in brewing traditional English ales have made many large breweries stick to the traditional geometry of square tanks with a “penetrable ceiling,” through which the traditional top-fermenting yeasts will accumulate at the end of primary fermentation and from where the yeast can be automatically harvested by a combination of valves and jets. This type of tank is called “Yorkshire Square,” referring to its shape and the place where they were invented and became widespread during the 20th century. Modern Yorkshire squares can be as large in volume as cylindroconicals and are also closed and fitted with CIP facilities, thus making them just as easy to automate as cylindroconicals. But because they are more complex, they are also expensive in terms of investment, they take up more space, and they cannot normally be placed outdoors.

Many British breweries maintain the tradition of open fermentation. They feel strongly that the method has positive effects on yeast health and beer flavor. In Bavaria, open fermentation is sometimes used in the production of weissbier and occasionally for lager. Many brewers there believe that open fermentation tends to create a more intense aroma profile in weissbier than does closed fermentation.

Marston’s Brewery of Burton-on-Trent, England, is known for having championed the once-common Burton Union system, where fermentation takes place in oak vats and expelled yeast travels between them in open troughs. It remains quite a thing to see, and Marston’s brewers claim that the flavor of their flagship beer would not be the same without it.