We all can see beers range from a light, pale-golden, a rich amber, or a dark brown, almost black color. You can taste it too, the light and crisp qualities versus the heavier and bolder flavors as your beer’s color goes from light to dark. But what factors actually influence the beer’s appearance?

First and foremost, all beers are not the same and on top of that, the craft beer you’re sipping on could have a number of reasons why it looks the way it does. Is it crystal clear or does it have a haziness to it? There are a lot of things to think about, so let’s get one of the most obvious observations out of the way: even the lightest of beers are not completely colorless. The ‘beer color’ is caused by 2 chemical reactions; one that attaches amino acids to sugars and another that prompts the sugar to break down. Both of these can largely impact a beer’s color and taste. 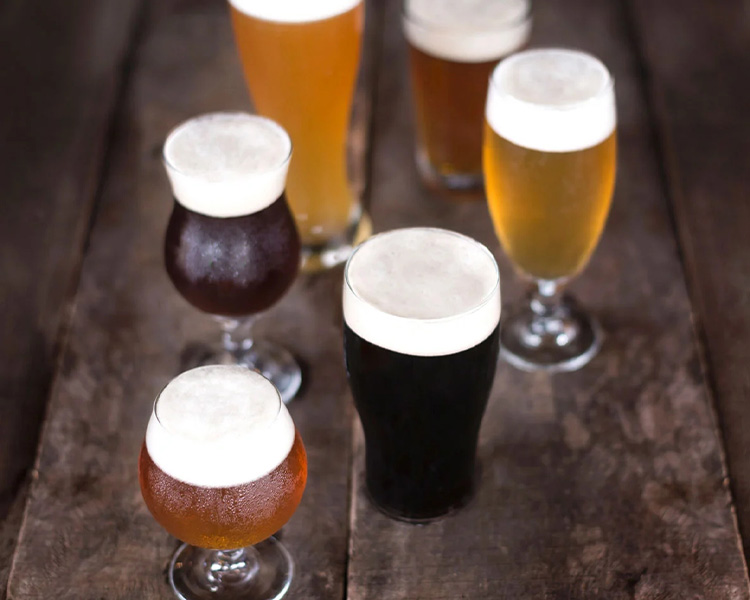 Here is the main component that influences the color of your beer:

Malts are the number one influence on your beer’s color. The coloration of your beer depends on a few conditions that the brewmaster can decide on while brewing. These choices ultimately lead to the resulting color of your beer.

Bottom line is, the more the malts are roasted, the darker the beer will be. This process is called The Maillard (my-YAR) Reaction, or simply “browning” and usually begins by kilning malted barley. Here, the brewmaster can decide the temperature of the kiln and therefore, the coloring potential while brewing. The flavors of bread, biscuits, toast, chocolate and coffee can all be attributed to the malts. Caramelization can also be applied during the browning process, which gives certain beers like Porters those signature caramel and roasted qualities.

“Mashing” (a brewing term for steeping the ground malted barley in water) is usually done by bringing the temperature up to a certain level, then letting it sit, or by fluctuating the temperature throughout the steeping process. The water’s pH levels while steeping comes in to play - the higher the pH, the darker the color. Not only that, but the longer the Mash is in contact with the grains also gives deeper coloring to the finished brew.

After the boiling portion of your beer’s journey, the liquid is extracted from the mash. That liquid is now called “Wort”. Once only the wort remains, it is typically treated to a “Cold Break”, which is used to rapidly cool down the mash before going into the fermenter. It also aids in removing malt particles that are packed with color-inducing tannins and thus, creating a clearer beer.

Although not a huge contributor to color, the particles that make it through cold break and into the fermenter will continue producing color. Various types of yeasts used during fermentation have also been known to change the color.

Last but not least, after fermenting the beer, it is usually filtered which results in a clearer beer. You’ll find some brewmasters choose not to filter or lightly filter their beers, which result in a hazy and brighter appearance. Filtration can reduce the beer’s color significantly.