The continuous distiller was put into use in the early 19th century and consists of a tall cylindrical column filled with perforated plates on which water-rich steam condenses and alcohol-rich steam passes through.
Product Description

The difference in boiling point of alcohol and water is used in distillation to separate these liquids from each other. The basic distillation apparatus consists of three parts: static or boiling, used to heat the liquid; condenser, used to cool the steam; and receiver, used to collect the distillate. 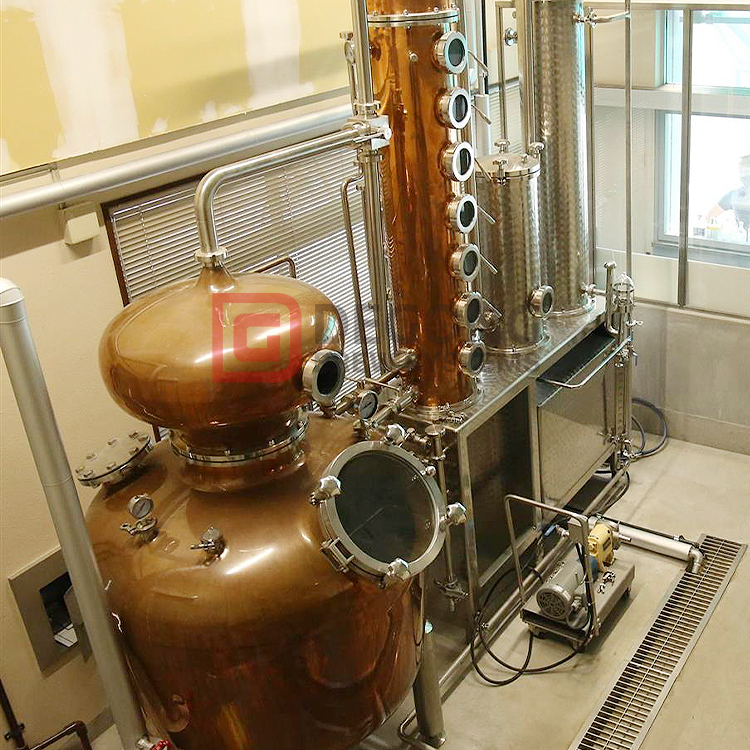 The simple pot still is a large enclosed vessel, heated either by direct firing on the bottom or by steam coils within the vessel, with a cylindrical bulb at its top leading to a partially cooled vapour line. The bulb and vapour line separate entrained liquid particles from the vapour on its way to the final condenser. The usual pot-still operation involves a series of two or three pot stills. Any vapour falling below a predetermined alcoholic content is fed into a second still, and condensed vapour from the second still falling below the required alcoholic content is fed to the third. The condensed vapours of the desired alcoholic content from all three stills are then commingled in a single receiving container.

The pot still, used primarily in Scotland and Ireland for whiskey production and in France for brandies, has had only brief use in distilled spirits production elsewhere and is gradually becoming obsolete. Even in countries in which the pot still has long been used, it has been replaced by continuous distillation for the major portion of alcoholic-liquor production, and its current use is limited to production of flavouring whiskeys and other flavouring ingredients.

The flavour profile of a pot-still product is more complex than that of a continuous-still product of the same alcohol content. This is a result of the different distillation methods. At a given temperature and pressure, vapours over a boiling mixture have a composition that is a function of the vapour pressures of the components of the mixture. In a pot still, the temperature of the fermentation mixture rises as the lower-boiling-temperature alcohol vaporizes. Meanwhile, the alcohol content of the distillate drops as the rising temperature vaporizes more water along with the alcohol. Distillation is allowed to continue until the alcohol content of the distillate falls to a predetemined level. Because of the rising temperature encountered in distilling a single batch, the composition of the first part of the condensate to leave the pot is different from that of the last part. The composition of the final product is the average of the composition of the vapours condensed during the entire run. By contrast, the temperature of the continuous still is held approximately constant throughout the run. This results in a flavour profile that is more uniform. 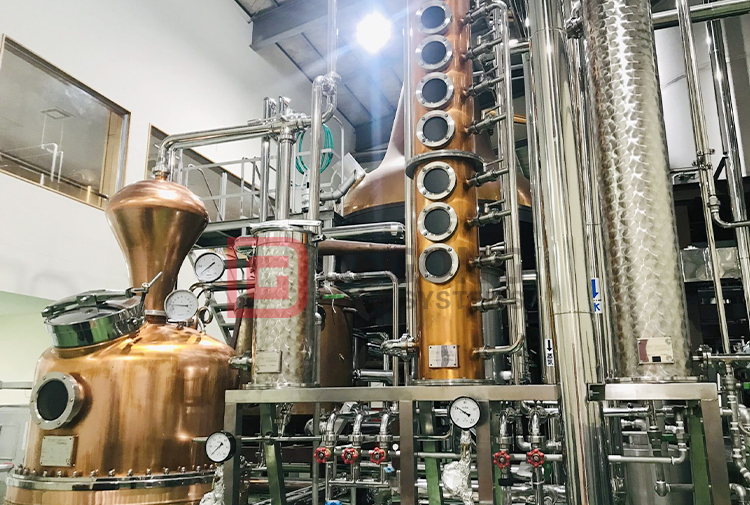 The continuous still, which came into use in the early 19th century, consists of a tall cylindrical column filled with perforated plates onto which water-rich vapours condense while alcohol-enriched vapours pass through. These plates thus serve as a series of small pot stills, one on top of the other. Live steam, used as the heat source, is fed into the bottom of the still, and the liquid to be distilled is fed near the top. Steam pressure holds the liquid on the plates, and, with any overflow caught by the plate below, the liquid level on each plate is maintained. Use of a sufficient number of plates assures that the concentration of alcohol in the vapour leaving the top of the still will be appropriate for the desired product and that the liquid leaving the bottom has been stripped of any alcohol.

Many distillation operations combine column and pot stills. The condensed distillate from the column still is fed to the doubler, a type of pot still heated by closed steam coils, and redistilled. 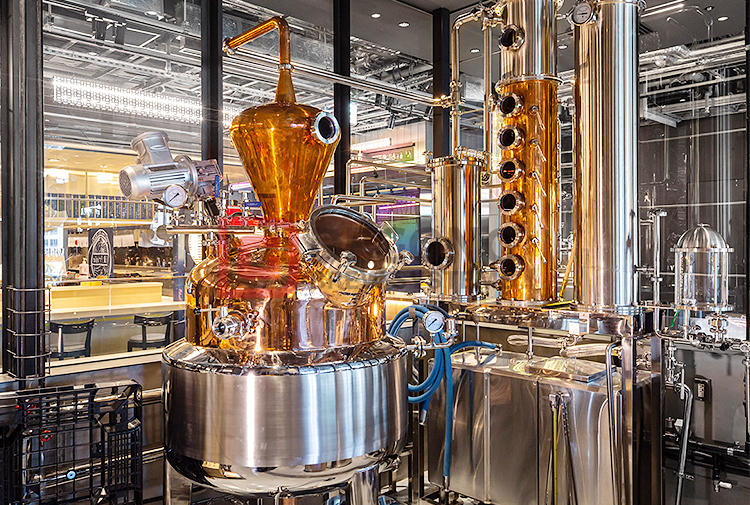 Rectification is the process of purifying alcohol by repeatedly or fractionally distilling it to remove water and undesirable compounds. As mentioned above, a fermentation mixture primarily contains water and ethyl alcohol and distillation involves increasing the percentage of ethyl alcohol in the mixture. Water vaporizes very easily, however, and, unless care is taken, the distillate of a fermentation mixture will contain unacceptably large quantities of water. The fermentation mixture furthermore contains small quantities of complex constituents that can contribute to the flavour of the product even if they are present only in parts per million. It is important to retain those components that make a positive contribution to the product and to remove those that are unwanted, primarily some organic aldehydes, acids, esters, and higher alcohols. The ones that remain in the product are called congeners, and the congener level is controlled by the particular rectification system and by the system’s method of operation.

The multicolumn rectifying system usually consists of three to five columns. The first column is always a preliminary separation column called the beer still, or analyzer. It usually consists of a series of metal plates with holes punched in them and baffles to control the liquid levels on the plates. The product coming from this column is between 55 and 80 percent ethyl alcohol. A 95 percent product can be produced on a two-column system consisting of a beer column and a rectifying column. The bulk of congener removal is accomplished in the rectifier—esters and higher alcohols, for example, being drawn off as side streams. However, a multicolumn system of several specialized rectifiers allows better control of the finished product. An aldehyde column, or purifier, is frequently used to separate these highly volatile low-boiling components, and sometimes ethyl alcohol is recovered in an extractive column and returned to the rectifier.

Three characteristics determine the elimination or retention of flavouring compounds: (1) their boiling points, (2) their solubilities in ethyl alcohol and water, and (3) their specific gravities. Some higher alcohols, for example, are removed on the basis of their solubility and specific gravity. These higher alcohols have limited solubility in water, and their specific gravities are less than that of water. Also, their boiling points are higher than that of ethyl alcohol and lower than that of water. Since they tend to accumulate in the rectifying column at the region where their boiling points cause them to condense, they can be drawn off as a liquid side stream. This side stream also contains a considerable amount of water. The limited solubility in water, plus the lower specific gravities, cause the higher alcohols to float to the top of the alcohol–water mixture, from which they can be removed.