Traditionally, British brewers used the term "barley wine" to describe their strongest ale, brewed from the first mash runnings, where a single mash produced multiple beers of descending gravity and alcohol. Barley wine is the richest and strongest of British ales, with a wine-like alcohol content. They usually vary in color from bronze to mahogany, though there are some golden versions. They are malty, heavy, and full-bodied, and they have lots of fruitiness that is usually balanced with a high rate of hop bitterness and low aroma, both of which may diminish during aging.

Bitter, a principal style of ale sold in Britain, is usually served on-tap and is usually called "bitter" or "best bitter." Its taste is rather mild to assertive, with medium or even low alcohol content. The beer is usually amber, often with a reddish tinge, but it can be golden in color. The dominating flavor of this beer is hop bitterness, which is accentuated by the low original gravity. Hop aroma is medium to high, but this is secondary. As opposed to mild and pale ale, Bitter should certainly be dry. Some styles will have a rich creamy head, while others are less carbonated. They are very similar to pale ales, and sometimes are identical. Traditionally, pale ales were bottled, while bitters were in casks or kegs. Nowadays, even this separation is no longer in use. Today, the major difference between a pale ale and a bitter is the name. Bitters are generally available in three strengths: ordinary, special and extra special bitter (or ESB). Pale ales are usually around the ESB strength, though some fall into the area of special bitter.

Brown ale was traditionally associated with northeastern England, especially Newcastle-upon-Tyne, though today it is found throughout England. Generally, brown ales are sweeter, fuller-bodied, more reddish brown, and stronger than their relative, mild ales. Some esters and fruitiness are present, and hop aroma and bitterness are usually in the low range but can be higher. Brown ales are less bitter than pale ales, but usually are maltier and have a higher alcohol level.

Indian Pale Ale (IPA) was traditionally a high-gravity, heavily hopped beer brewed for export to India. Today, Indian Pale Ale is a stronger variant of ordinary pale ale, but is usually hoppier, with a slightly higher final gravity than most pale ales.

Mild, originally a London style, is quite common in the Midlands, where it is still identified as something of a regional favorite. Mild always applies to draft ales. Mild ale is lower in alcohol than its relatives and not particularly robust, but it is flavorful and light- to medium-bodied.

Old ale is primarily an English style that was named "old" because it was kept a long time before drinking. Most are full-bodied and tawny, with nutty malt sweetness. High original gravities lend a fruity character and body to old ales. Color is usually light amber to very dark red. They are a high-alcohol version of pale ale, though generally not as strong or rich as barley wines.

Pale ale, first brewed in Burton-upon-Trent and Tadcaster, represents the very best in British beer. The beer has a medium body, low to medium maltiness, a bronze or copper color, and is generously hopped, with a dry crisp taste and little sweetness. Pale ale is distinguished by its light nuttiness of malt character, and its estery overtones followed by lingering hop bitterness.

Porter was the principal beer style in Britain, and especially in London, during the country’s greatest period of industrial and economic growth. Porter is a heavy beer of pronounced bitterness, reddish-brown to a very dark brown, but is usually lighter in body and malt character than stouts. Generally, porters are a medium-bodied counterpart to stouts, with varying degrees of sweetness and hop character. They have a definite – but not marked – estery character and a burnt-coffee-like taste of roasted malt. Porters are known as "robust" and "brown."

Stouts were first produced in the early nineteenth century as high-gravity porters called "stout porters." Within time, brewers began to drop the word "porter." Stouts are very dark, almost black in color. Their color is achieved with roasted malt and/or with roasted barley, dark caramel malt, or even some chocolate malt. Stouts, compared to porters, are higher in gravity, lower in attenuation, and somewhat higher in relative bitterness. Stouts do not have a unified style, but rather are a family of substyles that have evolved over the years. Their substyles include imperial, sweet, and oatmeal stouts. 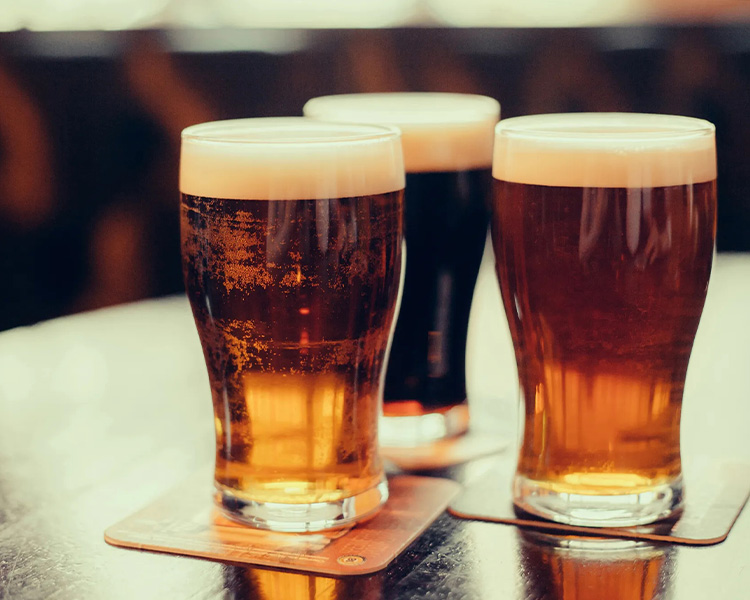